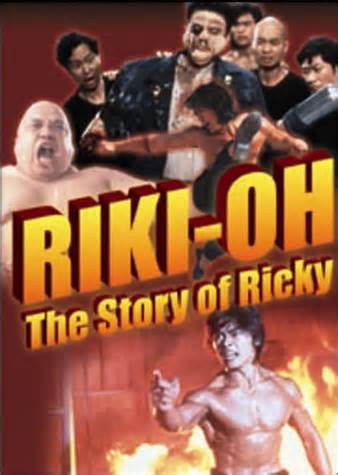 Plot: Ricky (Siu-Wong Fan) is a superhuman, kung fu expert who is sent to prison for avenging his girlfriend. Due to his need to defend the weak, he immediately gets on the bad side of the Warden (Ka-Kui Ho) and other prisoners. Skulls are going to be crushed.

From what I’ve heard, writer-and-director Ngai Choi Lam had intended to produce a new kind of kung fu film, one that was insanely hardcore and gory instead of relying on slap-stick comedy, advanced choreography or traditional martial arts. That project was “Riki-Oh: The Story of Ricky“, which is based on a comic I’ve never heard of. But for all of the directors ambitions, I highly doubt ‘unintentionally hilarious’ was one of his goals during production. Tsui Hark would be the one to revolutionize the genre due to his collaborations with Jet Li (“Once Upon a Time in China“), while “The Story of Ricky” was mocked for trying. Since then, audiences have grown to embrace “The Story of Ricky” as a comedy that had no intention of being a comedy and now that I’ve seen the film, I can see why. Bad has definitely never looked so good. Yet at the same time, I think its reputation has conquered the movie itself, to a point where most viewers don’t even look at it objectively. What I’m trying to say is even though it definitely has some snickering-inducing moments of awfulness, there is a certain level of skill to be found. In my eyes, “Riki-Oh: The Story of Ricky” works because it does occasionally become as epic as it wants to be, which compliment the bad parts nicely. It’s one of those few gems that makes its failures just as beautiful as its victories. If that’s too critic-y for you, then replace all of that this this: Whether it’s good or bad, “The Story of Ricky” is f@cking amazing!

The Good: One thing that’s often overlooked about “The Story of Ricky” is that even though most of the effects are craptastic, sometimes they do look pretty authentic. It’s often the minor touches that make them work, like when a punch leaves a noticeable welt. Sometimes the director will be able to mold a moody scene out of…rain…and stuff. Plus, the camerawork is pretty slick. The cinematographer uses plenty of fancy angles and the camera often seems to be moving, without becoming blurry or unfocused. I might be stretching this segment out a bit, but even though the charm of “The Story of Ricky” doesn’t come from its objectively good qualities, that doesn’t mean they don’t exist. Ngai Choi Lam either has some talent, or he had a good crew backing him.

The Bad: This is where I talk about the legit flaws, which aren’t very appealing. Or at least they didn’t appeal to me. “The Story of Ricky” begs us to care about minor characters, whose deaths wring out tears from our eyes even though those characters weren’t fleshed out at all. Actually, it wasn’t even that they weren’t fleshed out as much as they just seemingly appear out of nowhere. One character shows up for a scene, gets beaten up and tied to a cross (symbolism, because “The Story of Ricky” is clearly paralleling itself with Jesus, making this art). Ricky shows up to save the day, even though I don’t remember any interaction between those characters and when said victim dies, Ricky is devastated…even though I don’t remember any interactions between those characters. Previously, Ricky had an emotional breakdown when some poor fool hanged himself out of despair, even though they crossed paths like…once, and that was literally Ricky walking past the guy. Then later on, Ricky will be crushed when a mute whom he befriended for one scene died. I presume all of this came from the manga, but “The Story of Ricky” would then be guilty of trying to cram too much content into a single flick. Also, they appear to be building up to a revelation as to why Ricky is in the prison- especially as he could likely break out without a problem- but that’s never revealed. I’d like to think that Ricky just had a very long brain fart that clouded his judgment until the very end.

The Good Bad: Oooh boy, where do I start here? For every good gore effect, there will be like five effects that fail brilliantly. But even if the prosthetics are a little phoney, they’re so outrageous and absurd that you can’t help but jump up in joy whenever you see them. What are some examples? My personal favorite is when Ricky uppercuts an enemy and his fist PENETRATES his jaw, coming out of the poor bastards mouth. When something like this happens, you’re less likely to scoff as the fakeness and more likely to shit yourself as the site of Ricky’s fist going through his f@cking jaw. Of course, the most notorious scene is when a character attempts suicide by disemboweling himself, but when Ricky gets close, the villain tries to strangle him WITH HIS OWN INTESTINES! It’s freaking awesome. There’s no denying that at least somebody was creative when designing these moments of violence, whether it was the SFX people, the director/writer or the mangaka. The acting is pretty hilarious too. Everyone hams it up excessively, but the funniest performance comes from Siu-Wong Fan (Ricky). The man has the right physique and even an abundance of charisma, but his delivery is delightfully awful. In his defense, the director is more responsible as he either told the actor to over-sell the drama or failed to tell him to tone it down. Siu-Wong Fan has recently had a comeback with “Ip Man” (he played Jin, the decoy villain), where his acting was superb, so he clearly is better than this. But watching him ’emote’ in this movie is a very surreal experience. When he’s sad, he has the tendency to punch and kick at nothing in particular, yelling and crying at once. It’s like a child throwing a temper tantrum. There’s nothing subtle about his performance. Then again, there is nothing subtle about “The Story of Ricky“, so Siu-Wong Fan’s acting felt right at home. His…let’s say questionable performance, adds to the entertainment level. which is what matters.

The Weird: A lot of “The Story of Ricky” will leave you wondering what the hell you just witnessed. I want to give an example of the films bizarre level of creativity. The Assistant Warden isn’t just a hammy, gluttonous villain. He also has a hook in place of a hand and drinks water from the glass containing his artificial eye (!!), which dispenses tasty mints. Just typing that caused my brain to explode, which is an impressive feat considering it blew up 40 times during the course of this movie. There’s so much strangeness to be found here, like how one dude is played by a chick for no reason whatsoever. Or how Ricky’s master teaches Ricky by throwing grave markers at him. The craziest part had to come during the finale though, where a villain morphs into a giant ogre and takes on Ricky. As someone who watches lots of movies, I tend to know where stories will go long before they get there. I had plenty of ideas as to how this would end and most involved some sort of kung fu match between Ricky and the Warden. But I can’t say I was expecting the warden to turn into a big-ass monster…That..is certainly new. Someone had to be on acid when planning this story out. I refuse to believe that this level of genius can come from a sober mind…and I loved every crackpot idea it threw at me.

“Riki-Oh: The Story of Ricky” isn’t awesome because it’s bad. It’s awesome because everything about it aligned perfectly. The director is so heavy handed in his attempts to deliver melodrama that it becomes funny because it’s so sincere about itself. It’s even better when the director actually does succeed in creating an effective scene around said actors, so it’s just not just like your seeing a bad movie unfold. It’s more like your watching a war between a good and bad movie occur, only for both sides to join hands and work together to entertain you. The gore effects might look goofy and cheesy, but they’re also brutal and hardcore. Had the effects been better, “The Story of Ricky” might’ve come across as too mean-spirited. Had the kills been softer, they wouldn’t be as memorable. Honestly, even the real bad stuff didn’t bother me in any way. That was just me pretending to be a real critic. “Riki-Oh: The Story of Ricky” is, in its own way, perfect. I can’t imagine this being a more enjoyable experience.

Violence: Um…It’s a little violent…IT’S FREAKING INSANE! NOT FOR THE FAINT OF HEART!

Nudity: None, although there is an attempted rape.

Overall: “Riki-Oh: The Story of Ricky” is a must see for those who understand what it is. But unfortunately, the fake critic in me cannot give this the 4-star rating it deserves and retain his limited credibility. That guy is kind of an asshole though, so screw him! Then again, he is the one writing this article, so…yeah…Let’s just say “The Story of Ricky” transcends ratings, while at the same time I shall give it-