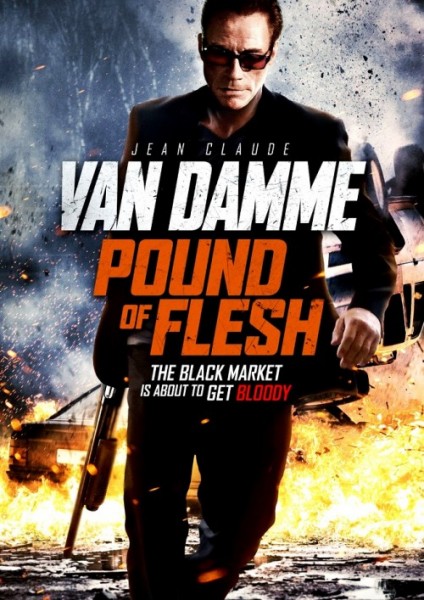 Plot: Deacon (Jean-Claude Van Damme) wakes up only to discover that his kidney has been stolen, which is problematic because he was planning on donating that kidney to his dying niece. Unfortunately for the Organ Thieves, Deacon happens to be an ex-special forces member with a violent streak and he will do anything to get it back.

“Pound of Flesh” is the third- and latest, as of 2015- collaboration between Jean-Claude Van Damme and director Ernie Barbarash, following “Assassination Games” (good) and “Six Bullets” (better). This pairing is a little strange in retrospect, as Van Damme is an iconic action star, while Barbarash is more comfortable directing thrillers which rely more on suspense than martial arts. Yet they brought out the best of each-other…until now…I had mixed and often contradictory emotions while watching “Pound of Flesh“, which only intensified once I sat down and thought about the movie. I initially was going to make a claim that it feels more like a Steven Seagal-Keoni Waxman vehicle than a JCVD-Barbarash effort, but I decided that the comparison wasn’t fair. While the technical aspects are significantly cruder than usual, I do believe that everyone involved in this project ‘tried’ to make it work. I’ve heard rumors of a troubled production, which would make sense as “Pound of Flesh” reeks of re-writes and potentially even re-shoots. Yet even then, everything is so inconsistently written, produced, directed, edited and acted that I can’t even confidently claim that effort was put into “Pound of Flesh“. See what I mean by contradictory? I just did not think that this was a very good movie…It’s not terrible though, even occasionally offering a good piece in a mostly subpar puzzle. I’d say that the arc of this review is: “It could’ve been better…“.

It does feel like there was a lot of martial arts action within “Pound of Flesh“, even though as I’ve said, Barbarash generally delivers suspense thrillers over actioners. The choreography is decent in an eccentric kind of way, alternating between MMA-styled holds and flashy acrobatics. The good news is that there is a variety amongst the fights, but the bad news is that I didn’t feel these vastly different styles worked very well together. It’s strange seeing a grounded-in-reality battle where someone would suddenly bust out an extremely fictional maneuver. There are some really cool moves on display though, which is a shame because the choreography is constantly at war with the direction. Barbarash uses murky lighting, disorienting editing and some awful framing in order to…well, cover up that Van Damme is often using a stunt double. I’ve seen enough Seagal movies to recognize these tricks and the battles between my eyes and the screen were far more engaging than the battles between Van Damme and the villains. But even when I could tell what was going on, I can’t say any of the action excited me. The shoot-outs were monotonous, the explosions were CGI and the car chase was boring…In “Assassination Games“, Barbarash used drama to make the action engaging. In “Six Bullets“, it was the brutality and intensity. They allowed us to overlook Barbarash’s limitations as an action director, even though the choreography was arguably worse than what we get here. “Pound of Flesh” might have more action and might even have better action, but it’s still mostly mediocre. Combine that with sluggish pacing and weak dramatic tension and you get a mostly uninteresting- if not entirely incompetent- movie. On a more positive note, the money shot of Van Damme doing the splits was freaking awesome, being both nostalgic and new at once. 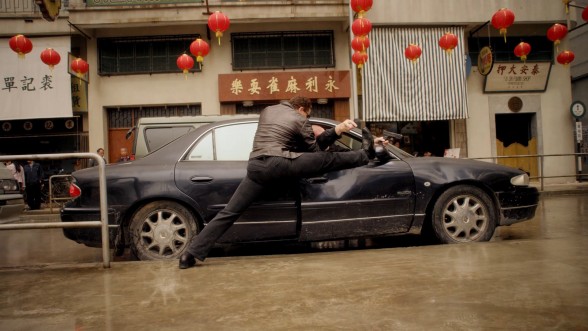 “Pound of Flesh” better be grateful that cliches exist, because it only exists because of cliches. It feeds on them and excretes them, not having an original bone in its body. I sometimes wondered if the writer had a check-list, because that’s the only reason for them to do the ‘new love interest resembles the dead love interest, which is why he’s attracted to new love interest’ subplot, which is the most inane romance angle ever. Even the profound dialogue loses all impact because we’ve heard it before…many, many times before. Yet I will concede that buried underneath its unoriginality lies a faintly beating heart and this is where I can buy the ‘Troubled Production’ explanation. “Pound of Flesh” puts a surprising amount of time in fleshing out its large cast of characters, with everyone having their own motivations, personalities, strengths, flaws and we always seem to know what’s going on within their minds. But I wouldn’t be surprised if a lot of material was removed, because I kept thinking why did they need to spend so much time on minor characters? Did we really need the love interest? Or the hacker? Or the old comrade? Or said old comrade’s second-in-command? I keep feeling that there was originally a purpose to these characters and how they tied into our protagonists, but the final result just felt like something was missing. I noticed that a lot of the character-based exposition took place in a car, which was often green-screened, which makes me suspect that the scene was a last minute addition. Perhaps the filmmakers were forced to remove large chunks of the script for financial reasons and had to cram that dialogue and information into that car. This is 100% speculation, but that’s what it felt like to me. Perhaps all of the missed opportunities can be found on the editing room floor. Is Deacon a bad man? Obviously he desires redemption and deep down, has a heart of gold. I don’t hold his ugly past against him for this reason, but I do take issue with him partying and drinking the night before he’s about to donate his kidney. I’m not expert, but that does not seem very healthy and I feel the script needed to explore this more. Is he having an adverse effect on the more sympathetic George, who is inspiring Deacon to be a better person? I suspect that this was the intention, as George becomes progressively darker as the story moves along, while Deacon does develop a stronger sense of morality. The problem is that when the pay-off to this dynamic occurs, it’s too sudden and feels more like a plot device than character development.

The acting also makes me question what happened behind-the-scenes, as there are good actors and bad actors, but also actors who continuously alternate between doing good or bad- such as Van Damme. There are some scenes where he’s awesome, perfectly selling me on the emotional weight of the moment. There are other scenes where he’s so intense that he becomes a little scary. But then there are times when he just sounds bored or will derail what would otherwise be a powerful moment. I actually laughed when he starts begging a character not to do something terrible during the finale, because his line delivery is so over-the-top. Yet the director also deserves some of the blame thanks to really awkward camera placement. John Ralston is exceptional as George, an impressive accomplishment considering that the character is the wet blanket of this film. The characters development is choppy, perhaps another casualty of the alleged troubled production, but he made it almost work. Darren Shahlavi (Drake) was so entertaining as the antagonist that I made a mental note to follow his career…I was sad to learn that he had passed away shortly after filming wrapped up. Am I the only one who found it strange that the cast is mostly comprised of white people, even though it was shot in China and apparently takes place in the Philippines? The production values were not very impressive and I’ve noticed that every low budget, direct-to-DVD movie has to have those fillery transitions where we see quick cuts of the location. To be honest, this was a hard critique to write as “Pound of Flesh” is mostly just subpar. The good isn’t very good and the bad isn’t very bad, but I expect more considering the people involved.

Nudity: We see the ass of Van Damme’s stunt double and some brief shots of a sex scene.

Overall: “Pound of Flesh” is mediocre. There are flashes of inspiration though, enough to convince me that a troubled production might’ve derailed its potential to be good.