(Written and Directed by Seiji Chiba)

Plot: A small group of female ninja have been captured by the enemy and are being taken to a village where they will become sex slaves. But Kisaragi (Rina Takeda), a mysterious woman, has no intention of being the enemies’ plaything.

I watched “Kunoichi: Ninja Girl” because it starred Rina Takeda (“High Kick Girl” and “Karate Girl“), who could use her karate to high-kick me anytime. Hehehe, although I…probably would sue her if that really happened. Little did I know that her latest venture was directed by Seiji Chiba of “Alien Vs Ninja” fame. It’s amusing because I wasn’t aware of this until I began the review, but throughout my viewing of “Ninja Girl”, that movie kept popping up in my head. Why? Because both movies are VERY low budget. There are only a few sets, the camerawork has a very ‘made-for-TV’ feel and even the blood looks fake. They just resembled each-other on a technical level. Also, every time I see one of Seiji Chiba’s movies, I get the impression that he intended to make a soft-core, rape-porn, only to realize that his actresses all have no nudity clauses in their contracts…because nobody gets naked. But the most defining aspect of Chiba is that even though he is NOT a good director, his ineptness tends to be more bizarre than downright bad. While “Ninja Girl” might not be as strange as “Alien Vs Ninja”, it’s bizarre because Seiji’s writing abilities are openly at war with his directing abilities.

Before I realized who the director was, I was going to say: “Had “Ninja Girl” been directed by anyone else, it could’ve been pretty good as the script has some brilliant ideas and twists”. Then I saw it was Chiba and not only had he directed “Ninja Girl”, he also penned it. That’s not to say this was a strong screen-play. The plot is simple, although maybe it’s deceptively simple, as the story goes into areas I was not expecting. But there are some really bold twists and daring ideas that come into play. One of the bigger flaws is that scenes have the tendency to drag on, but I will concede that Chiba did a DECENT job at making those scenes interesting. The interactions are sort of compelling because every character seems shrouded in mystery and the actors deserve props for making the characters more lively. I can’t talk too much about were the script succeeded without spoiling anything, but lets just say there is more going on than what one would expect out of what can be described as a pornless porno…with ninjas. 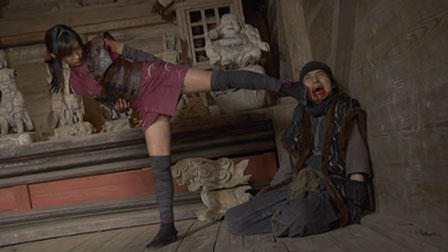 Somebody would’ve definitely had to revise the script though, because Chiba clearly had very little money to work with. Now, minimal resources often means shoddier film-work, crappier effects, sets and even less time to work on the fight scenes. But “Ninja Girl” is so openly low budget that it literally has no more than five sets. Even a kung fu nut like me has to acknowledge that too much fighting can become more exhausting than exciting, especially with so few locations to fight in. So what pads out the screen-time? Talking. Lots and lots of talking. Now as I said, the interactions were alright. But I have to admit that spending a third of your movie explaining peoples motives is a bit excessive. It’s even more annoying because Rina Takeda, despite being the main character, is oddly absent through all of this talking. So yeah, while Chiba had some very good ideas, his budget limitations presumably limited what he could do with him. “Alien Vs Ninja” also had little money to play with, but that didn’t effect the script. You could’ve taken that same script and made a summer blockbuster out of it, but “Ninja Girl” was clearly written with the low budget in mind, which is why its so small in scale.

What about the action? There’s not a lot of it. There are two real fight scenes, whereas everything else is just a one-sided beating. The only thing that would stand out in these smack-arounds is how the camera would leer at the ladies, constantly trying to give us a glimpse of whats under their skirts. This might be the only movie I’ve ever seen where it almost looks like the camera is going to get punched for its transgressions. Oh yeah, there is one other noticeable quirk. I criticized “High-Kick Girl” for its lack of sound effects, which diminished the impact of the kicks and punches. “Ninja Girl” is the complete opposite, having over-the-top sound effects whenever someone would get hit. It made the attacks seem even phonier for it. Anyway, The first big fight is average, but the finale is pretty awesome. It looked like more time went into the choreography and I liked some of the gimmicks. It begins as a fist fight and ends with swords, but the ninja-tricks they use are pretty cool. Startlingly, Seiji didn’t totally fuck things up with the lighting, cinematography or editing. It’s like everything aligned perfectly for that final battle. Still, that is only ONE battle. I thought “Karate Girl” was too talky and didn’t sport enough martial arts, but it’s action packed compared to “Ninja Girl”. It’s even worse when you consider that this is LESS THAN AN HOUR LONG! 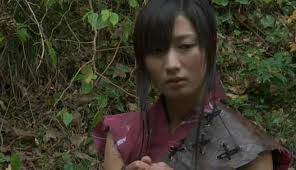 It’s amusing how I began my journey with “Ninja Girl” expecting to judge it as a Rina Takeda movie, but instead began to view it as a Seiji Chiba flick, which just happened to star Rina Takeda. Maybe that’s for the better because as a Rina Takeda feature, I was disappointed. There’s just not enough action and there isn’t enough Rina Takeda. Acting-wise, most of the supporting cast outshines her, but only because they have a lot more to do. She’s mostly just playing a prop, showcasing no personality, although at least she has enough presence to carry the scenes she’s in. As a Seiji Chiba movie, I could either criticize it for being too restrained or praise it for restraining itself. It lacks the crazy badness of “Alien Vs Ninja”, but it’s also not as memorable for that same reason. Yet shockingly, “Ninja Girl” does prove that deep down, Seiji Chiba has some talent as a writer. It’s just too bad he’s also the director. So this was a rather…odd experience for me. I’m still not sure if it’s odd in a good or bad kind of way. I didn’t dislike it. But its better ideas and Rina Takeda both deserve to be in a better movie, while at the same time they kept “Ninja Girl” from sucking.

Violence: Rated R worthy…I guess. There’s some blood, but it’s mostly left to the imagination. Still, it would be too gritty for a PG-13 rating.

Nudity: There is a lot of talk of rape, with two actual rape scenes. They’re so awkwardly staged though and everyone is wearing all of their clothing, so you might be confused as to whether anything actually happened. We only know they did occur because characters say so.

Overall: “Ninja Girl” isn’t a very good movie, but it could’ve been had more time and money been put into it.