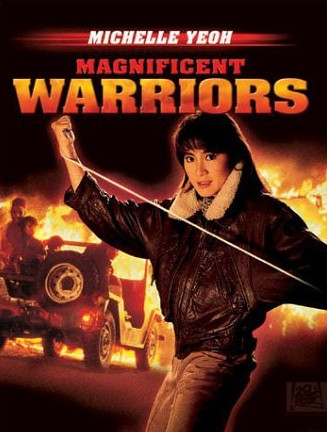 Plot: Ming (Michelle Yeoh) is an adventuring transporter who takes a job from the Chinese Government during World War 2. The mission? To foil a Japanese plot, obviously. Also known as “Dynamite Fighters“…which doesn’t make a lot of sense, as the only dynamite I remember was used against the heroes…and “Zhong hua zhan shi“. 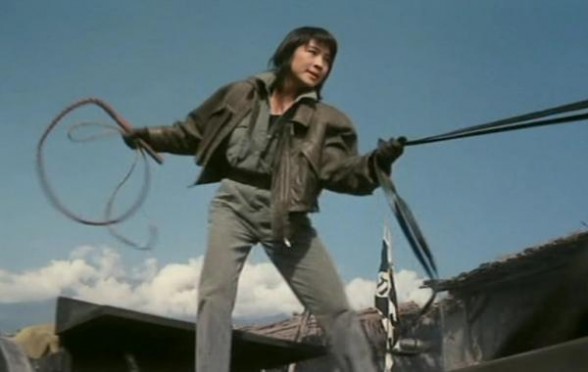 I had scribbled these bullet-points down as I was watching “Magnificent Warriors” and you might’ve noticed that my initial enthusiasm began to wane around the half way point, which perfectly represents my feelings. “Magnificent Warriors” is usually described as the kung fu version of Indiana Jones, which is both accurate and misleading at the same time. The influences are obvious, with the most blatant example being the whip that Ming (Michelle Yeoh) wields, but I wouldn’t go so far to call it a rip-off. I’d say Indiana Jones inspired these filmmakers, who also borrowed from “The Seven Samurai” for the finale. Amusingly, stealing- if you want to use this word- from these movies probably made “Magnificent Warriors” the most original kung fu flick since…ever…I expect characters to introduce their fists to the faces of their enemies, but I don’t expect aerial combat, fedoras and explosive car chases. These additional touches gave the film a refreshing flavor that helps distinguish it from the rest of the kung fu flock. It also helps that the action is exciting, intense and brilliantly choreographed, with a new action set piece waiting impatiently behind every corner. I just wish that the second half was as spectacular as the first!

The first five minutes had me hooked thanks to the charming Michelle Yeoh, who is just too freaking cool without her trying too hard to be too freaking cool. She’s sexy, but her looks don’t outshine her personality and her roguish heroine never becomes unpleasant- even when she’s irritated. When she first interacts with her obvious love interest (Tung-Shing Yee), they immediately set up the ‘But…but you’re a woman!/Women can do things just as well as men’ dynamic that dominates the majority of action romances. Shockingly, the bickering is downplayed and they mostly get along famously, without either character submitting to the other. They have nice chemistry and their interactions with the colorful supporting cast were a lot of fun. Even though there are a lot of vehicular chases, explosions, shoot-outs and hand-to-hand fights, “Magnificent Warriors” is ultimately an adventure, filled with exotic locations and eccentric characterizations. The score is rousing- if maybe repetitive, the scenery is breathtaking and the set pieces are surprisingly elaborate. This must’ve had quite the budget, because the production values are worthy of Hollywood. There are a lot of wild stunts and the martial arts choreography is very stylish and fast paced, even though I don’t believe the leading actors are real martial artists. I guess there are some sloppy moments here and there, but it really looks like the characters are blasting each-other with everything they’ve got. You can practically feel Michelle Yeoh’s attacks break the fourth wall and strike you in the face- but in a good way! My favorite fight scenes usually involved swords. The acrobatics on display is stunning and the slashes seem unnervingly authentic, as if the actors were legitimately trying to murder each-other. Paying tribute to Kurosawa and Spielberg sounds nice in theory, but it’s easy to accidentally cause the audience to compare and contrast, which can make your film look that much more inferior. But the director just borrows some ideas, creates an epic atmosphere by going crazy with wide shots and develops his own style. He could’ve easily just let the action speak for itself, but he uses slow motion, long takes and provides lots of striking visuals. I shudder imagining how long it took for the filmmakers to frame all of these shots- which usually included significant props, larger-than-life sets and (at least) dozens of extras all at once. You’d think that with all of this chaos, everything would look messy and disorienting, but everything was staged with immaculate precision and my eyes feasted heartily on the spectacle. Many shortcomings of the Hong Kong film industry during this time period, such as choppy editing and bland cinematography, are absent for “Magnificent Warriors“. If anything, these technical aspects are outright exceptional.

Unfortunately, much of what “Magnificent Warriors” sets up begins to come undone during the second half. I’m not saying that the second half sucks- in fact, it’s pretty good on its own. It’s just that the first half was incredible, easy warranting a 3.5/4 star rating, maybe even higher. My jaw was on the ground! But after a point, I began to realize that there were too many subplots, belonging to too many characters. This lead to the narrative practically strangling their characterizations, stripping them of everything that made them interesting in the guise of character development. Richard Ng Yiu-hon was hilarious as Paulina Wong, while Lowell Lo (Youda) and Chindy Lau (Chin Chin) also brought a lot of side splitting humor to the table. But where they really necessary? I personally think Richard Ng’s and Chindy Lau’s characters could’ve been omitted and more time would’ve ideally been spent on its protagonists. The film completely lost me when large chunks of their back-stories were revealed. That exposition was so laughably lazy that I almost wonder if it was intended to be parody! But even worse, these revelations barely have anything to do with their characterizations. All this did was draw attention to how flimsy the character writing was. When they’d develop, it would be too abrupt and not make any sense. One scene has everyone uniting and saying they were all ‘in this together’, only for the next scene to have the group fall apart in the worst possible moment. The love interest even threatens a comrade with a gun, even though he had never struck me as being fanatical. But then it’s never brought up again. So these characters only change based on what the plot needs at that exact moment. Even Ming, who began as an intriguing character, slowly devolves into a prop- even when we are being forced fed her personal history- although Yeoh is captivating enough to keep me interested. The villain- who is brought down in a very anti-climactic way- perhaps embodies this flaw. His characterization is contradictory and by the ending, I had no idea what I was supposed to think about him. I also thought the tone fell apart. The first half is a light hearted, comical, but reasonably intense adventure! The second half retains the comedy, but it feels out-of-place with all of these brutal death sequences. Admittedly, this is a criticism directed at the majority of genre flicks to come from Hong Kong during this time period. The action is just as exciting, if not even moreso, as it was before. The pacing does eventually burn itself out though, as the confrontations- whether they involved bullets, arrows, bombs or feet- become a little monotonous. Up until the finale, each battle was different than the last. But then they all start to look alike and go on for so long, that my brain started to get a little numb. I do stress ‘a little’. The choreography, stunt work and effects were still mind blowing.

Everything mentioned in the last paragraph is what keeps “Magnificent Warriors” from being great, but I will still call it an exceptional actioner. Even the finale shines from sheer ambition. Perhaps the narrative collapsed under its own weight, but I will admit that I enjoyed a lot of the unnecessary fat, even if it ultimately brought the movie down. Otherwise, “Magnificent Warriors” is a lot of fun- a fast paced, bombastic, stylish, adventure/war siege that benefits from ripping off the right movies. Plus, it’s hard not to fall in love with Michelle Yeoh.

Overall: “Magnificent Warriors” might be imperfect and a little derivative, but I thought it was really cool.