“The Hunger Games” is one of those movies where half of the crowd will hail it as an instant classic, a stellar example of all around great film-making! Everyone else will complain about its fans, who over-hyped what is a good movie, but nothing special. Expectations can be a movies best friend or its worst enemy, depending on what the public says about it. I entered the film with no real hopes or concerns about the movie. I hadn’t read the books and the trailer simultaneously made the film look epic but “Twilight”-ish. Plus, the premise isn’t especially original, but it’s one I continue to enjoy. So now that I’ve seen the film, which party am I? Both. 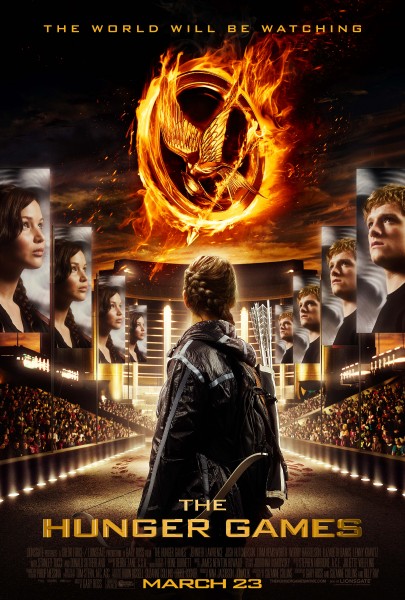 Plot: The film takes place in an unknown future where the rich became too rich and the poor became too poor. The wealthy live in luxury in the Capitol, while the poor each has their own district. Prior to the events in this film, the districts rose up against the Capitol but failed and as punishment for their treason, a random male and female from each district is pitted against the other districts in a battle royale to the death (called the Hunger Games), where only one participant will win. Katniss (Jennifer Lawrence) and Peeta (Josh Hutcherson) have been selected for this, the former volunteering after her sister was the one chosen. The two find themselves in a completely new world as they must adapt to the idea that they might have to kill each other. When the games start, they are going to be in a fight for their lives.

“The Hunger Games” is a good movie. It’s a large scale film that makes sure it never forgets that it’s about the people participating in such a vast event, not just the event itself. It’s gorgeous to look at and has plenty of edgy and intense moments, mixed in with startlingly funny scenes and tear jerking sequences too. The characters are all interesting because the cast is interesting. We have Donald Sutherland (President Snow), Woody Harrelson (Haymitch Abernathe), Wes Bentley (Seneca Crane), Stanley Tucci (Caesar Flickerman), Elizabeth Banks (Effie Trinket) and Josh Hutcherson (Peeta) all delivering stand out performances, all capturing my interest. But the leading lady, Jennifer Lawrence, was the one who was the most compelling and I was completely with her the entire way. When everyone is interesting, your movie can’t fail, so I stand behind “The Hunger Games” as a really good movie with some flaws that might be more personal than practical. But for organizations sake, let’s split up the rest of this review into two parts: The first half and the second half.

The first hour of the movie is setting us up for the Hunger Games. We are introduced to the characters and learn about them. They earned my sympathy, so the movie had my attention. We follow their reactions to the world they’ve grown up in, their horror at being forced to participate in the deadly games and their awe when they see the Capitol. When they start preparing and training, it was like I was among them. I felt everything they felt, which is everything the movie wanted me to feel, so that’s obviously a good thing. I also loved everything about the Capitol. I like how it’s full of vivid colors and abstract costume/hair designs. These days, movies are just too bleak and dull looking. “The Hunger Games” is pretty bleak, but only in how people act towards each other. The films look is more vibrant and lively, which is a nice break from the cliched crap we see in most epics. My only complaint with the first half was it was a bit too long. It’s never boring, but it almost seems to climax with the beginning of the games because too much time was spent on the build up. This would REALLY effect the films second half. I think it’s when the Hunger Games start that the film ceases being great and starts being good. 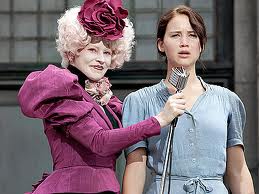 The second half still manages to be exciting, but it happens so late that within 20 minutes of it I’m already glancing at my watch. I also hate it when I have to criticize the film for trying to flesh out its characters. I’m all for that kind of stuff, but it needs to feel organic and relevant to the story. Did we really need to the flashback with the Father? Or even the bit with Abernathe watching some kids (at least that was touching)? Maybe it ties in better with the sequels, but those who haven’t read the books won’t know that. Little things like that will bloat the film up. We also are forced to endure another lame love story. It’s hard to do a good romance in film and “The Hunger Games” isn’t awful with its attempts at it, but I didn’t think the actors had the right chemistry as a couple. They fall in love too quickly and I never figured out why. It’s possible that it was intentionally ‘fake’, but they spend too much time with it.

It’s even more awkward because I thought that Katniss had a boyfriend already. Someone explained to me that she and her initial love interest are only supposed to be friends, but I thought that the movie did a bad job at explaining that. All this stuff started to make the film sluggish, while also rushing over the more interesting ideas. I didn’t understand certain rules until it was too late, nor did I really get why characters did certain things. I wasn’t bothered by the shaky camerawork or the muddled violence. I thought it was as effective as it needed to be while not being sleazy. I love “Battle Royale”, but I do think it was a bit sleazy whereas this film just wanted to be depressing with the entire concept. The film still looks good and is still effectively exciting. I don’t want to give the impression that it’s bad. It’s good, it’s just that the faults start catching up at once. The films build up was far more engaging than the pay off.

For those expecting “Battle Royale”, you’re going to be disappointed. That film covered a lot more, whereas this only focuses on a few characters and the bulk of the deaths come from interchangeable characters with no personalities. I’m not criticizing “The Hunger Games” for that, as it does such a great job with its few characters. Both movies had similar premises, but go about it differently. I also don’t agree with the “Harry Potter” and “Twilight” comparisons, but the reasons speak for themselves. I adored the cast/characters, was interested in the story and was filled with wonder by the films world. But when the Hunger Games themselves actually start, the pacing becomes iffy and the love story is shallow, so I can’t say I loved the film. But I did like it. Think “Avatar”, but with a little more actual substance. A little…

Overall: I’d recommend “The Hunger Games”, but expect a good movie instead of a great one.