When “Scott Pilgrim Vs the World” bombed upon its opening week,, fans were flabbergasted. “How? Why? What the hell!” they cried like little fanboys. Everybody liked this movie! Even the Critics did! Yet really, is it a surprise that this made no money? It was a hybrid film, having action, comedy, romance and that usually isn’t the box office gold that we’d expect it to be. It was released at the same time as “The Expendables” – which stole the action crowd- and “Eat Suck Love” (or whatever that crap was called)- which stole the romance crowd. Even the comedy crowd went ahead a watched “The Other Guys” again. Yet the reason I avoided it was completely different all together.

I could tell, regardless of how positive the reviews were, that I would not like this film. It reminded me way too much of “Speed Racer” with its visual style, its sense of humor and its broad characterizations. I knew that if I spelled out why I didn’t like it, I would be fed upon by thousands of piranha (fanboys) and it would send me into another year long war with a fanbase. Now that I’ve seen the film, I was right. I did not like it.

But I didn’t dislike the movie as much as I thought either, so I guess that’s something?

“The only thing boring about this movie is what it wants to focus on!”

Plot: Scott Pilgrim (Michael Cera) is a doucbebag guitar player who spends his days loafing around and dating a high school student (!!) named Knives Chau (Ellen Wong). His life is turned upside when he sees bad girl, Ramona Flowers (Mary Elizabeth Winstead)…walking and looking at him dismissively…He falls in love with her for no reason and pursues her obsessively (it’s creepy). She does agree to date him but now he has to fend off her seven evil ex boyfriends. It’s time to pull out his….badass powers (?) and kick some ass.

The thing with “Scott Pilgrim Vs the World” is that you can’t really think of it as good or bad, but instead have to think about it as what’s cool or not cool. Unfortunately, I cannot always do that and I often found myself “critiquing” this movie anyway. To be fair to myself though, some of my complaints do really effect my enjoyment. I HATED Scott Pilgrim. He was a shallow, simple minded jackass who takes things for granted and treats the people around him poorly when he’s not into them at the moment. He is supposed to grow by the end of the movie, but it’s handled so poorly that I wondered if the film was satirizing character development in general. Personally, I have no idea why anyone would want to date this guy, much less two ladies (one of whom is obsessed with him). Ramona apparently isn’t any better based on her flashbacks, although at least she sort of acknowledges that she was a bitch. There romance together is so contrived and devoid of chemistry that it makes Edward and Bella’s relationship appear deep. Scott’s feelings resemble creepy-as-fuck lust and Ramona’s feelings suggest that he’s just a faze for her. Ironically, the film at times seems to know this and almost wants to do something with it. Scott probably would end up as another “evil ex” and Ramona might just be going through a faze, but by the end of the movie we’re supposed to believe there is something of depth between them. Either way, it’s bad writing. Cera and Winstead fail to make their roles interesting either. Cera is just Jesse Eisenberg without substance, although he can be pretty funny. His attempts at being dramatic here are pretty awkward. I love Winstead, but she just has to look cool and doesn’t “act” much at all. 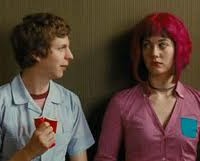 Ironically, despite my hatred for the leads, I did end up liking everyone else in the movie. Seriously, EVERY little supporting character in this film is side splitting. I loved the Band Members, the gay roommate (who stole the show), the bitchy girl with all those jobs, the sister, the evil exes and even the one shot characters whom are really only punchlines instead of actual people (the other Scott, lol). I find it to be very refreshing when the bulk of a films characters are fun and interesting, but frustrating when the leads manage to be the worst of the lot. The only other exception is Knives. I felt for her at first but as time went on, she became more and more irritating. But otherwise, the film does a pretty good job when it comes to its characters and the actors playing them.

But what is cool? What is not cool? Everything about this movie is very broad. I don’t just mean the characters and events either (although they’re pretty broad too), I mean that I either loved something about this movie or hated it. Some of its dialogue is very inspired, witty and memorable. Other lines are are “Batman and Robin” bad (“bi-furious” has to be the worst thing ever spoken in a film). The movie is full of bizarre ideas that add to the laughs, like how being a Vegan makes you psychic. Other times it will completely misfire. The fight with the first evil ex was pretty cool in terms of martial arts choreography. I was impressed! But as soon as he started singing, I started groaning. That was really the whole movie for me. One minute I was happy. The next I was not.

The films visual style can be described as a live action video game, a style I never really understood. Can’t I see this shit in an actual video game? Is it really fun to feel like you’re watching someone else play a video game? Still, the film often makes it work with some cool imagery. Other parts are more comic book inspired and they work alright. On the other hand, I don’t get why movies would ever want to have these fake-ish effects. I had the same issue with “Speed Racer”. Why spend $100,000,000 on fake visual effects when you could just hire the SFX dudes from “The Asylum” or the ScyFy Channel and you could get the same result for a fraction of the cost? But many find it endearing. Many also like the films hyperactive editing style, although I found it disorienting. But I always do respect it when it’s obvious onscreen that the director is trying his hardest. I might call “Scott Pilgrim Vs the World” many things, but lazy is not one of them.

The most important thing about “Scott Pilgrim vs the World” is that everything about it rides on its effect on you. If it fails to make a connection, you will HATE this movie probably like I hated “Sucker Punch”. This is because there is nothing objectively good about it. On the other hand, there is some objectively bad stuff here. The romance is garbage and I was bothered that the film forgot to establish its “world” (where people have super powers and Scott is a badass) during its first act. But my complaints seem to be more reserved for me. Most people who watch this movie have liked it, so either its faults aren’t really faults, or they just don’t care. As I said, it comes down to its effect on you. Personally, I loved 50% of this movie and hated the other 50%.

Violence: PG-13 worthy. Scott does kill people in cold blood, which is unsettling, but it is pretty cartoonish.

Nudity: You see Mary Elizabeth Winstead in her underwear (I don’t like her look in this movie, so that did nothing for me) and there are references to sex (hetero and homo). PG-13 worthy.

Overall: I’d say watch the trailer on youtube and if it looks like it might appeal to you, go ahead and watch it. I’m not one of the films many fans, but even I have to acknowledge it has its moments.