From the creators of “Open Water” comes “Silent House“, a film that boasts to be one continuous take throughout the entire film. An intriguing concept, but it wasn’t enough to win over audiences and at best, it’s a polarizing film. At worst, it’s just a disappointing one. The more I think about it, the more I realize that this movie is “Open Water” all over again. Like that film, it can feel real and is continuously edgy, but it’s also redundant and it’s more cinematic moments don’t gell with its attempts to be realistic. It’s not a bad film. Hell, sometimes it’s even a good film, but it runs out of steam long before its 85 minute run time is up. 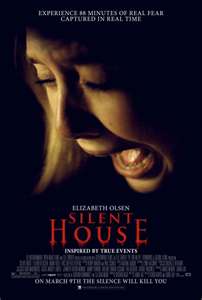 Despite the trailer suggesting that it’s some sort of paranormal fright flick, “Silent House” is more of a ‘home intruder’ horror feature. Sarah (Elizabeth Olsen) is helping her Father (Adam Trese) and Uncle (Eric Sheffer Stevens) fix up a lakeside retreat their family owns so they can sell it. The Uncle leaves, leaving them alone in the crusty, dilapidated house. Everything seems to be going fine until she starts hearing noises. Then her Father vanishes. Then she finds herself being hunted by a mysterious stranger. So she must hide from the attacker and plot her escape.

“Silent House” does a lot of stuff right. It cast reasonably solid actors in the roles and Elizabeth Olsen was fantastic. She’s cute, but felt natural, so it doesn’t feel like she’s acting. The films “no editing” gimmick has been disputed by some people, but it’s clear that even if there were a few takes, there weren’t many and this had to have been a bitch to pull off. I always respect when the hard work put into the film shows on-screen. There are moments of impressive cinematography and like “Open Water” it is generally clinical with a few flashes of style in terms of how it was shot. There’s a lot of hand held camera footage, but it’s never disorienting. I was a bit of a smart ass though and kept joking to myself that the stalker is the cameraman and that he was always right behind her. But I am a wise ass, so there. I thought that the lighting was always right. Dark enough to be grim, but not to the point of being incomprehensible. 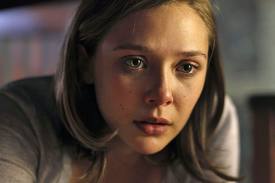 There’s a continuous (wow, I’ve been saying that word a lot in this review) sense of unease throughout the film. I always expected something menacing to be lurking behind every corner. Sometimes it was a certain kind of noise that we would hear in the background. Sometimes it was the lack of noise that brought the chills. Olsen’s acting also contributes to the suspense, as I always feel that good suspense comes from good acting. Her fear becomes our fear and that always helps with any kind of horror movie. But this should spell success, right? So what is the problem?

The problem is, the film keeps repeating itself OVER and OVER again.

Girl hears creepy noise, girl creeps around the house while frightened, girl is nearly caught by stranger and hides, hiding place is found out and girl runs….THAT IS THE ENTIRE MOVIE! It’s scary the first time and it’s scary the second time (I am being liberal with those words, the film isn’t THAT terrifying) , but by the fifth time it just got old. God damn I’ve never seen a film combine “I’m scared” with “I’m bored” so much. Movie, you had a great scare, but reusing it OVER AND OVER AGAIN just drained me and I eventually just wanted it to end.

Another major problem is the film is clearly building up to a big twist, but I literally figured it out within five minutes. The acting and dialogue is surprisingly natural for this kind of movie, but whenever it wants to establish that something is awry, it becomes too phony. This is noticeable, for example, when Sarah randomly explains that the phone lines are damaged and their cell phones don’t work. But with the twist, it’s when a character says something in a way that screams “creepy” (and no, I’m not referring to the weird girl who visits Sarah. It has to do with “grown up”). I immediately knew the “why” just from that. It was just a question of “who” and “how” and about twenty to thirty minutes later those answers became obvious. Eventually the film starts making these clues so obvious that it becomes annoying that it’s making us wait for the big reveal. I’ve known how this would end 30 minutes ago movie! WHY DID YOU MAKE ME WAIT SO LONG!? I also felt that the final confrontation was too cartoonish to be taken seriously. As I said, like with “Open Water” it struggles at balancing realism with cinematic. 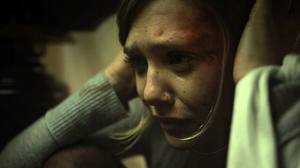 In general, the husband and wife directing team are talented filmmakers, but they’ve yet to successfully achieve a balanced flow with the narrative. Granted, they’ve done like…three movies? So it might just be inexperience. They do great in parts. Parts of their movies are gritty and chillingly realistic. Parts of their movies are spooky and maybe even downright scary. But they never seem to have enough material for their (already short) movies and this leaves a lot of pot holes within the narrative. The material they try to fill it up with is either stuff that the movie has already used or it falls back on cliches that cheapen the films impact. That pretty much sums up “Silent House” for me. It starts off strong but loses steam because there isn’t enough substance to fill the running time. Personally, I think it would’ve worked better as a 60 minute long short film.

Note: I am aware this is a remake, but since I’ve yet to see the original, I don’t know how it compares.

Violence: It’s Rated R but I don’t think it needed to be. Most of the violence is left to the imagination.

Nudity: None, but the camera seems intent on looking down Olsen’s shirt (NO COMPLAINTS!).

Overall: If “Silent House” sounds interesting to you, give it a shot. I’d say horror fans in general should watch it, but unless it really intrigues you, I’d wait for DVD.