For some strange reason, I often forget about “[REC]” whenever I’m discussing my favorite found footage films. It confuses me because it is easily one of the better examples of its kind. The movie took a simple, maybe even predictable concept and somehow delivered an intense, startling and even scary genre film. It’s greatness was even sometimes captured in the pointless remake, “Quarantine”. I’ve grown to believe that the title works against the movie. Whenever I try to explain it to people, I sound really stupid because you have to explain the title when you say it. Anyway, “[REC 2]” got fans excited, but I was weary. It was the execution of the material that made the first film so riveting, not the idea. Ultimately, the film was sometimes effective and it tried to do something different. But I’m really not sure if it worked… 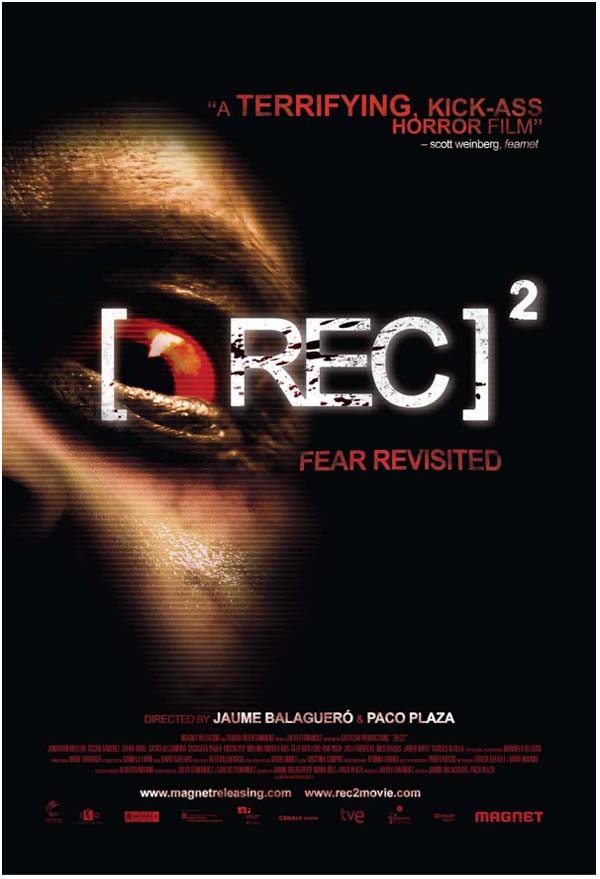 I’m not going to list any names- character and cast member- because the films gravest weakness is how it handles its characters. The film opens with its previous protagonist being pulled into the darkness. We then learn that outside the building, a SWAT Team is preparing to enter with a Scientist from the ministry of health. They enter and find themselves fighting for their lives against hordes of the “infected”, people who have become like zombies. Soon, three stupid teenagers decide to sneak into the building like morons and get caught in the fray too.

“[Rec] 2” had the tendency to really impress AND anger me. The characters are never fleshed out and you can’t tell most of them apart. Soon, their uglier traits start dominating how we perceive them. The scientist is an asshole for entering all of this unprepared, the SWAT guys are constantly yelling the same shit over and over again (headache inducing) and those fucking kids….Oh my God, I have never seen a horror film in my life where I just wanted them to die in the worst way possible. When you consider the genre, that is a pretty heavy statement. Everything they do or say pissed me off to no end. In fact, by the end of the movie it just seemed like every character was doing the dumbest or most annoying thing possible. It’s never a good thing when you start actually rooting for the zombies.

The story has earned a mixed reception, which is fitting because I myself have mixed feelings on where they go with this movie. Horror works best when you can’t explain everything that’s going on. With the first film, you spend the first movie thinking that this is just a typical zombie outbreak of some sort like what happened in “28 Days Later”. However, you learn in the end that it is possibly MUCH worse. The implications made it far creepier than it would’ve if it flat out told us what was going on. It brought in its own horror and the problem with a sequel is you either are redundant for going nowhere with the story or you explain too much. This movie explains too much, flat out telling us that the disease is supernatural. But it also doesn’t explain enough. “How did that happen?”, “Why did that matter?”, “Why does the Priest only sometimes seem effective?”. The films ending left me frustrated because too much of it didn’t make sense. Sadly, sometimes the directors could not pull off this angle either. Some of the scenes that stress demonic possession (and no, I’m not really spoiling this, they flat out say so within the first 20 minutes) become unintentionally funny. In fact, a few scenes made me laugh when I should’ve been biting my nails in fear. 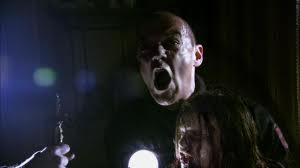 Still, while “[REC] 2” had the tendency to anger me, I wouldn’t call it a bad movie. In fact, fans of the first film SHOULD still check this out because it does have moments that are genuinely terrifying. Once it gets moving, the film rarely takes a break to slow down and the intensity generally worked (when I wasn’t laughing). The finale really did a great job at getting under my skin and I have to praise the directors for doing a lot of experimenting with the camera. It kept the film visually fresh, although not quite as scary as its predecessor. The loud noises, the sudden ambushes, the freaky lighting and the experimental camera work kept me on my toes. If it’s 75% a dumb movie, then I’d say it’s also 75% a fairly scary movie, if that makes sense.

“[REC] 2” deserves praise for trying to be different. It takes the story in a new direction and does a lot of new stuff with its found footage gimmick. But it also- even if only occasionally- captures the terror that it’s predecessor crushed us with. Yet even when it didn’t quite keep the bar that high, it was almost always edgy and intense. But I didn’t like it’s “explain too much, yet too little” approach to the story, I did not like the characters and the whole subplot with those kids left me fuming. In fact, I think the kids kept the movie from reaching a truly positive rating for me, because it was obviously filler. Filler that irritated me…So “[REC] 2” does a lot of stuff right and a lot of stuff wrong, but I do believe fans of the original should give it a shot.

Nudity: There is a naked corpse at the end.

Overall: Watch “[REC] 2” if you liked the original (which you SHOULD watch), but don’t expect it to be as good.