“John Carter” is one of those movies that can be enjoyed if you go into it with the right mentality. If you just look at it as another conventional epic that’s only purpose is to show off some cool special effects, or you want a high spectacle/low plot ratio, then you’ll likely find the movie to be agreeable enough. The problem is it should’ve been more. Armed with a $250,000,000 budget and a lot talent (behind and in front of the camera), it should’ve bitch slapped us with the golden arm of cinema. But it didn’t and in the end, it’s just another CGI-fest, high on spectacle and low on everything else. 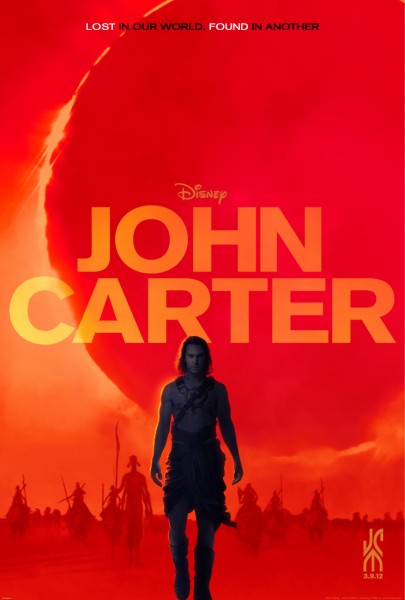 Plot: Edgar Rice Burrows (Daryl Sabara) is brought to the impressive manor of his Uncle, John Carter (Taylor Kitsch), only to discover that he’s passed away under mysterious circumstances. Carter left him his entire estate, but he is instructed to read John’s personal memoirs. From there, he reads about his Uncle’s wild adventures and we follow these adventures. John Carter is looking for gold, but instead he finds trouble and is transported to Mars for reasons he doesn’t understand. He’s entered the planet at a troubled time too. A tyrant (Dominic West) has achieved a god-like weapon that allows him to dominate the rival (“good”) kingdom. Carter is reluctantly forced to participate, but first has to do all sorts of conventional crap that one would expect in this movie.

I’m not too familiar with the films source material. Apparently there was a bunch of serials released in 1912 about the adventures of John Carter on Mars, which were compiled into a novel called “The Princess of Mars“. It spawned a franchise which eventually lead to a comic book and even a 2009 movie produced by “The Asylum” (shudders), before the 2012 movie came along. The novels are all highly regarded and apparently inspired the sci-fi genre as we know it, so I mean no disrespect to the novels. The problem? “John Carter” was groundbreaking in 1912. It might’ve continued to be groundbreaking through the 70’s, but by 2012? It offers nothing that we haven’t seen before.

I always hate it when I’m watching a movie and I keep being reminded of other movies. Sometimes the allusions are vague, but the seeds are planted and I never could shake off the memories of other (better) films. Sometimes I don’t even think I was thinking about other movies, but just general cliches. I know I’ve seen that “former disillusioned soldier being forcefully drafted back in the military” subplot before and the “It’s not my fight” reasoning has been done WAY too many times. “Transformers 2“…”Tekken“…it’s a cliche that pisses me off every time a movie uses it. The “accidental transportation to hostile alien world where a war is going on” idea was recently used in “Tron: Legacy“. The importance of being human was used in that film as well as the “Narnia” movies. The banter between Carter and his love interest and how they constantly plot against each other reminded me too much of “Prince of Persia: The Sands of Time“. The air ships brought “Star Wars” to mind, and while the “Avatar” comparisons are overblown, some of the designs/dialogue felt derived from that too. There are familiar lines like: “They started it, but we’ll finish it!“. The ENTIRE movie was like this. Is it fair that I criticize the film for this when it’s not really its fault that everyone has ripped off/borrowed from/homages the source material so much? No, but maybe “John Carter” shouldn’t have been made in the first place.

NOTE: If someone tells me that most of the cliches did NOT appear in the original novels, then that makes this movie even worse for it.

Besides being too familiar, the movie also makes the mistake of mismanaging its time. The film is 132 minutes long, but it feels closer to three hours. Why? It takes way too long in the set-up. There are quite a few scenes in the opening act that added nothing but more minutes to the running time and it just keeps going and going. Ironically, the films best subplots are also its most pointless. I enjoyed the sequences with Carter and the Colonel (Bryan Cranston) and the ones with Carter and that dog-monster. They were funny and charming, but weren’t necessary at all. It spends too much time with the pointless stuff, but not enough on the relevant stuff. When they try to explain everything, I was left utterly confused. The romance between Carter and Princess Dejah (Lynn Collins) made me realized how accomplished “Prince of Persia” was with its love story. As with 98% of Hollywood love stories, it feels more like lust than love, but we’re supposed to accept it as the latter. The annoying thing is there is enough screen-time between the two to ruin the pacing, but not enough to make us care.

The final problem is that the characters themselves aren’t always likable. To be fair, their faults are clearly intentional, but it just made me want to punch everyone. John Carter wants to avoid other peoples wars with that ‘it’s not my fight’ crap and when we discover why, it’s supposed to explain his reasoning. I will say this, the “why” revelation was the movies most moving sequence. However, it makes John seem like a prick. One line the Colonel states that John dismisses is revealed to be what happened to John, so John thinks its okay to let the same thing happen to everybody else? The Princess is arguably worse. She’s continuously berating John for not sacrificing his own needs for others, yet she refuses to marry the villain when that will (presumably) stop the War. If John is a prick, then she is a bitch for giving him so much hell when she’s guilty of the same thing. At least he is just emotionally wounded, which probably is effecting his judgment. Now, this is obviously there for character development and indeed, these two develop. But we have to endure this hypocrisy for most of the movie and when they finally do get their heads out of their asses, I didn’t care. Screw you characters, I’m going to root for the monster dog.

But as messy as the script is, I wouldn’t call the film bad. Most of these spectacles are not designed to be good movies, they are designed to showcase awesome digital effects and big battle sequences. My only reluctance in forgiving “John Carter” based on this logic is that “John Carter” seems to WANT to be better than most of its ilk, and it just fails. It wants us to care for its cast, for what’s happening, etc, but I never understood why I should invest my sympathies with them so all of that time is wasted. It’s not as pretentious as “Avatar“, but it’s not as memorable as it either. “Avatar” made up for its preachy, conventional script with a sweet visual that pretty much appeared in every scene. You saw its entire budget on-screen. So do you see the entire budget of “John Carter” on-screen? 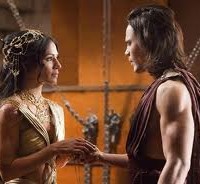 I guess…Unlike “Avatar” (shit, now I’m doing the comparisons, aren’t I?), “John Carter” doesn’t have enough room to be hardcore with effects. You can’t do too much with a desert planet like Mars, but what we see is rather phenomenal. I love how the film manages to be ‘big’ with settings. Everything looks vast and epic, but it’s the little details that makes them seem realistic. You can see people moving around in the glass portions of the air ships and those little quirks tend to make CGI appear more realistic than it really is. The alien designs are pretty slick and CGI used is very polished. Perhaps it is too polished, but as far as CGI goes, it’s very state of the art stuff. The action ranges from smooth to surprisingly brutal, but always well choreographed. The films most creative idea is how the gravity pull effects Earthlings. There are a few slickly designed props in general, like that blue energy weapon the villain has. So visually, the film delivers. The cast is also stellar and it’s a treat to notice everyone you recognize. Mark Strong, Willem Dafoe, Thomas Haden Church, Ciaran Hinds (who is in like every movie ever made in the past two years) and of course Bryan Cranston are all actors who can make dull roles interesting and they do just that here. Taylor Kitsch (John Carter) did better than I anticipated, but he was too young for the part at times.

Ironically, my favorites parts were the scenes that weren’t necessary. In these moments, I felt what the movie wanted me to feel. I’d feel sorrow, anger, amusement, happiness and I would be on the edge of my seat. So what I loved was also a major problem with the movie and I’m not sure how I would respond to that. But because its so average, I’d say it’s “Clash of the Titans (2010)” or “Green Lantern” worthy. As a big, dumb, feast for the eyes, I think it’s acceptable. However, it’s pacing is awkward so I can’t call it “fun”. But it also has moments of genuine emotion and wonder, which gives the movie its own personality. Most big dumb spectacles don’t have that going for them. So “John Carter” is a mess of both good and bad and your enjoyment will come down to what side grabs you. For me, I responded to the movie with: “eh, it’s okay, I guess“, but it should’ve been much better considering the talent and money involved.

Nudity: None, although there are under-currents of sexuality.

Overall: You might want to watch “John Carter” if you like big, dumb, CGI-fests that has some notable highlights as well as flaws. If you don’t care, I wouldn’t bother.