“Hellraiser 5: Inferno” had left fans either fuming or glowing, and I happened to be one of the latter. It made me feel everything it wanted me to feel, even if it was far from the conventional Hellraiser entry. It’s even more shocking considering its bizarre back-story, that should spell out “epic failure”. “Hellraiser 6: Hellseeker” had a similar back-story in that the studio took an acquired script that had nothing to do with the franchise and converted it into the next Hellraiser entry. You can see that the filmmakers tried to recapture that same surreal energy of its predecessor, but it fails. It fails badly. 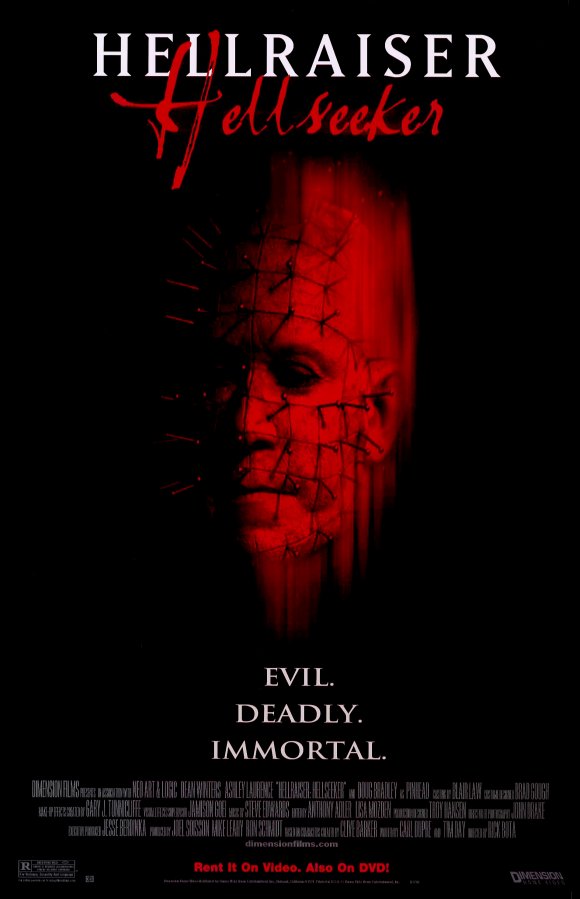 The films big gimmick is that Kirsty (Ashley Lawrence), the protagonist from the first two films, has returned to the franchise. We see that she is married to an office clerk named Trevor (Dean Winters). They’re driving together and they keep looking at each other, kissing, etc instead of watching the road. I’m rolling my eyes in annoyance (hate it when movies do this) until the car actually crashes into a lake. Wow, a movie actually was realistic about that. Thanks! Anyway, Trevor fails to save Kirsty and she apparently drowns, although her body is never recovered. Trevor has been left with head trauma and he struggles recalling important clues surrounding her disappearance. But strange things start to happen as he pieces together fragments of his memory, learning things about himself that perhaps he wish he didn’t know about. He learns he was an adulterer, who cheated with multiple women. He keeps hallucinating about the lament configuration box. Oh yeah, and he might’ve killed his wife. Regardless, Pinhead and the demonic forces of hell have taken a keen interest in him and he has to find out why.

The film has a lot of intriguing ideas and concepts that could’ve made this into a stellar entry within the franchise. For one, the plot was probably ripping off “Memento”. But instead of expressing disdain for that, I will say that I think that could’ve been a cool twist had it been done right. I especially like how the opening quote ties into that. The film finally brings to the surface what has only been implied/toyed with before: the pleasurable side of pain. There’s a lot of sex in this movie and it’s all very aggressive and lusty. In fact, sex is one of the films main themes, which I thought was a nice contrast to the previous films. Of course, the main draw was the return of Kirsty. By the time I watched this, I knew it was a cameo, so I wasn’t as furious as the fans were when this was released in 2002. Honestly, I didn’t think Ashley Lawrence did so hot in the first two, so I was indifferent to her return. But it does open some doors to connecting more to the earlier films. Unfortunately, with all of these ideas, the film has absolutely no idea how to use them. The narrative completely flounders, never really taking off in the first place.

Man, I can’t believe a movie that is constantly filled with horrific images bored me so much. I think part of the problem is that it tries to hard to accomplish what “Hellraiser 5” did. It’s trying to be a character understudy, where we spend the bulk of the movie watching our protagonist descend into insanity. The last film had an engaging narrative that kept things from falling apart. It’s about a sleazy cop trying to catch a demonic serial killer as he loses sight of reality. With this one, it’s about a boring office guy walking around, sort of confused as he loses sight of reality. It’s just not interesting. 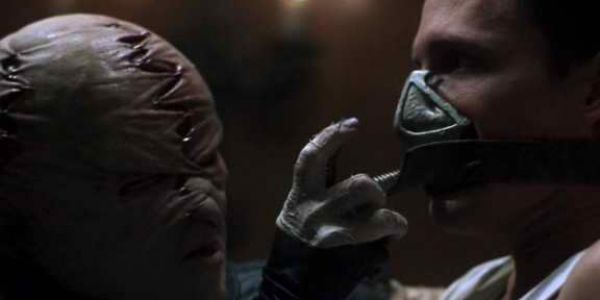 The sad thing is, nothing about this movie is especially awful. The acting is acceptable, although Dean Winters fails to inject any kind of charisma or energy into his role. He’s a stellar actor, but he always seems too…well, confused, lost and passive. There’s no fire in him and since we figure out that this was not a nice guy early on, we never have any reason to root for him. Detective Thorne was a jackass, but that was how he was established and the rest of the movie was based on his redemption. Here, Trevor is just always in denial and you’re just waiting to find out the extent of his douchebagery. Is he just an adulterer? Or is he a murderer too? Either way, I don’t care. The cinematography and direction aren’t bad. Usually it looks a little classier than your average direct-to-DVD film, but it just never absorbed me into its atmosphere. There’s never any suspense or anything, although there are a few startling moments of violence.

I will give the movie this. It tries to make Pinhead scary again. His dubbed voice has returned (which I prefer over Bradley’s normal voice) and the director tries to think of new and effective ways at giving him presence. It doesn’t always work. The scene where Pinhead is in Trevor’s reflection (in a puddle) was a creative idea, but it looked a bit silly. However, Pinhead’s final scene was fairly effective. I can’t say that Bota pulled it off, but Pinhead himself was more interesting here than he was in the past two films. With that said, Bradley’s age has finally begun to show and that’s a little distracting. The cenobites look kind of cool, but the lighting is so dark that it loses all impact. Also, there is one CGI cenobite near the end that SUCKED. IT SUCKED HARD! It made that cameraman cenobite seem like the best idea ever. I wish these movies would stop using CGI. It just looks awful. 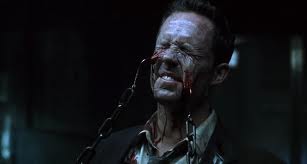 Strangely, the director cut out a lot of scenes involving Kirsty that tied more in with the original, but it makes everything seem choppier. What was Trevor trying to accomplish with the box? Did he know about her past? The director wanted it to be accessible to new viewers, which is stupid because few newbies to the franchise would start with a direct-to-dvd sequel, but it leaves so many loose ends that I imagine new viewers will be confused anyway. Confusion+boring is NOT a good combination, but that is what “Hellraiser 6” is.

That’s really all I have to say. “Hellraiser VI: Hellseeker” is just a mess of a film, hiding behind its constant dream sequences. There’s no sense of urgency, no real tension, suspense or atmosphere. It’s just sort of there…being fairly competent…but not wanting to leave any impact at all. “Hellraiser III” may have been bad, but at least it was interesting as a train-wreck. Plus, it had some stand out good sequences! “Hellraiser VI” is just sort of bland and dull. It’s not unwatchable, but there’s no reason to watch this unless your a franchise completest like myself.

Violence: Rated R worthy. It’s about as violent as its predecessor.

Nudity: There is a fair amount involved with its sex scenes.

Overall: I did not enjoy “Hellraiser VI: Hellseeker” at all. It’s not intolerably bad, it’s just sort of bleh…below average in the worst way possible.