I can only imagine that the studios looked at the (amusing) abomination they created in the form of “Hellraiser 3” and realized they may have lost a potential cash cow with their half baked entry. Like or hate “Hellraiser 4“, there is no denying the effort put into it. It’s ambitious, sometimes even innovative. However, during production, the studio clashed with the director, who left the project and ended up using the dreaded Alan Smithee pseudonym in place of his own. His film ended up being chopped apart before they even finished the shoot! I’m not sure the movie would’ve been a classic had the director been around to express his vision, but the pieces that are left of his work are still surprisingly effective. 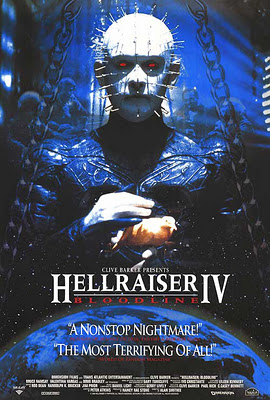 Plot: The film opens in the future on a mostly empty spaceship. Dr Paul Merchant (Bruce Ramsay), an enigmatic engineer, personally controls a robot that is trying to solve the puzzle box that unleashes hell upon those who open it. He succeeds, unleashing Pinhead (Doug Bradley) and his Cenobites, who tear the robot apart. Merchant and Pinhead exchange words before space marines invade the ship and take the Doctor prisoner. From there, Merchant relates his family bloodline from when his ancestor invented the puzzle box which was used for nefarious purposes (opening the gates of hell), to when another ancestor in our present time expanded upon the box. Merchant wishes to finish where his ancestors failed. Kill Pinhead once and for all.

The main gimmick of the film sounds like it’s “Pinhead in space”, which is a pretty bizarre concept. At the time, everyone was going into space. Critters, Pinhead, the Leprechaun and even Jason eventually found himself in the stars. However, the film instead wants to be maybe a bit too ambitious. The opening 10 minutes and the closing 20 (?) do take place in space, but the film divides its time between the past, present and future. Personally, while I respect the films scope, I think this structure is doomed to failure. We’re never going to be able to spend enough time with anyone so why should we care who lives or who dies? Even the main character isn’t in the movie for more than 30 minutes. This is especially glaring with the ending, where we’re supposed to fear for the space marines who can’t even be called cliches. They don’t have time to be your typical cliches. Instead, they are shadows of cliches. Even the original directors version couldn’t have done anything with this. But let’s break the film down into three parts and discuss each.

The Past: This segment takes place during the 1700’s, I believe, and focuses on the toymaker (also played by Bruce Ramsay) who invents the puzzle box that is used to summon a demoness known as Angelique (Valentina Vargas). This is easily the films best segment as the time period works perfectly with the hellish atmosphere these films bathe in. The lighting is haunting, the locations are menacing and the imagery is downright morbid. The gore is vicious, yet it adds to the atmosphere just as it did with the first “Hellraiser”. Furthermore, the characters are actually interesting. The toymaker is sympathetic, the aristocratic was freaking weird and Angelique is the perfect villain. She’s seductive and sexy, but also is surprisingly frightening when she wants to be. She was a nice contrast compared to the other cenobites, using lust instead of torture. While Pinhead doesn’t appear during this segment (he doesn’t even exist yet), I couldn’t wait to see them interact. I was looking forward to their witty banter and their opposing philosophies (when this happens, however, it doesn’t work).

Unfortunately, these scenes are SOOOO good that it makes everything else seem disappointing once they move on. I wanted to see more of the decay and moral decadence that was so prominent at the time contrast with the aristocratic sophistication and wealth. The movie exploits it so well, but it’s also just a taste. Plus, Angelique could revive the pain-is-pleasure theme. The film toys with this and indeed, Angelique becomes a sex slave for her master, but they could’ve gone farther. Pinhead is more about the pain, Angelique is more about the pleasure and I wanted to see more of the crossing between the two. 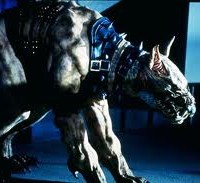 The Present: This is where the movie starts to lag. To be fair, this seems like it would’ve been the hardest segment to pull off anyway. Just the fact that the first and last segments are period pieces make them somewhat original, but the present is boring! However, it just seemed to me that the film wasn’t sure what it wanted to do with this segment. It follows the toymakers descendant, John (Ramsay again), as he constructs a more badass version of the cube. Angelique tracks him down and tries to lure him into making the cube so it can open the gates of hell, but before then she resurrects Pinhead and finds the old cube that was buried in cement at the end of “Hellraiser 3”. John realizes that they are evil and plan to use his device for world domination. This segment isn’t without its strengths. The chattering dog is a pretty cool effect, there are some harrowing gore effects and the building has a pretty strange design. There is some suspense, but the films look seems uninspired, like it belongs in a made-for-TV special.

I disliked the padding, like that stalk sequence with the twins. I disliked that Angelique becomes underused while once again, Pinhead gets too much screen-time. In fact, he’s even less scarier than he was in the previous film. Doug Bradley’s performance lacks conviction and he just rambles too much. He’s become more of a mobster, or a Bond villain. There is even a stupid scene where he’s stroking a dove. Pinhead himself is just too cheesy of a character by this point. I ended up wanting more of Angelique, who is an established badass herself. But the movie wants more of Pinhead and we get WAAAAY too much of him. This entire segment is just sort of dull of clumsy. The acting, dialogue, cinematography…I wouldn’t call it bad, it’s just sort of awkward and generic. Sometimes whole scenes seem to be missing, which hurts the narrative a lot. But things are about to get a little better… 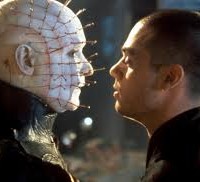 The Future: I actually really liked Paul as a protagonist. He’s mysterious, has more presence than his ancestors and you feel this guy could take on Pinhead. The space locations are used effectively and have that “Alien” kind of design, so everything looks dilapidated and rusty. The suspense works fairly well, but what I liked about this the most is that they USE the future as part of the plot. Paul uses the technology of the time to fight Pinhead and I think that’s awesome, because you don’t see it matter very much with the other horror franchises in space. But once again, it makes you want MORE! You want to see more of the future, more of the space marines, more of Paul, more of EVERYTHING except the present segment. And Pinhead.

I think they should’ve just made three movies out of this. Or maybe just two and the present scenes could just be scrapped. So really, the films biggest weakness is it teases us with its awesomeness but seems more interested in rolling around in its weaker elements. Still, I loved it when this movie worked. I loved its atmosphere, it’s awesome practical effects (The CGI blows, but this was 1996, what can you expect?) and that this time they actually hired REAL actors to deliver the lame dialogue. The dialogue isn’t awful (usually), it’s just kind of ‘eh’. Although Pinhead does get a few good lines. Whether or not the directors version would’ve been better is unknown, as the fan cuts of it sort of blow (although it’s interesting hearing Angelique and Pinhead speaking with their original voices). I can’t see how the film would be classic material, but it probably would’ve been a little superior at the absolute least. Regardless, I think “Hellraiser 4” is about as good as “Hellraiser 2“. It has a lot of good and a lot of bad about it, but I really do like the good stuff more than I hate the bad stuff.

Overall: “Hellraiser 4” is a overcomplicated mess, but it’s strengths appealed to me and I enjoyed it all the same. Worth watching if you enjoyed the first 3 (or even if it was just the first two)