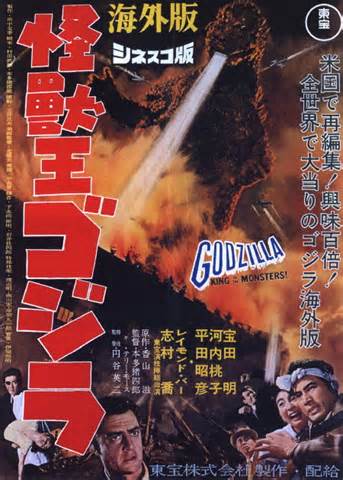 Plot: Steve Martin (Raymond Burr) is a reporter who investigates a story about a giant monster known as Godzilla, who has apparently been attacking Japanese ships. He gets his proof when this beast appears in Tokyo bay…

Well, considering there are no other monsters in this movie, he best be king! If you haven’t already, I strongly recommend you check out my review of “Gojira” before reading this…Or at least that’s what I would’ve said if freewebs didn’t freeze all my reviews…Basically, “Godzilla, King of the Monsters” was a re-edited version of “Gojira“, splicing in new scenes with Raymond Burr, which is how most people know the movie. The result was that Godzilla would become an icon, spawning countless sequels, rip-offs, two American remakes as well as two cartoons (one based on the first remake). It should also be noted that I considered this to be near perfect upon initial viewings. Then I saw “Gojira” and thought it to be superior. Now whenever I view “Godzilla, King of the Monsters“, I can’t help but compare it unfavorably to the original. Still, that’s not to say it doesn’t work in its own way. To make this easier on myself, I’ll occasionally do some splicing of my own, inserting bits of my previous review and putting them in italics, so you know what’s new and what’s not…Of course, you’ll have to take my word for it, since you can’t currently read my original review because FREEWEBS SUCKS! Roar! But the following praises for “Gojira” also apply to “Godzilla, King of the Monsters“.

I have been a huge fan of Godzilla ever since I was a young sprite. However, the first film in the series never did it for me as a child. I preferred the ‘good guy’ Godzilla, and I didn’t like black and white. The biggest reason is that I was a kid, and “Gojira” (as well as the Americanized counterpart) isn’t a kids movie. It’s a very bleak, dark, depressing, apocalyptic film that focuses on the death and destruction that Godzilla causes. At that tender age, I would’ve preferred watching Godzilla fly, drop kick Megalon, get shot in the nuts or rear by Ghidorah and do his victory dance from “Godzilla Vs Monster Zero“. Screw that artistic shit! But I’ve gotten older and my tastes have shifted, so now I prefer the kind of movie that “Godzilla, King of the Monsters” is.

I love Ishiro Honda when he is on. Sure, he can throw us a shitty movie like “Godzilla’s Revenge”(Note: This review was written before I re-watched that film), that completely relies on stock footage. Yet he is generally a solid director, and this is easily his most powerful film. It is very atmospheric and quite frightening. You feel everyone’s fear, which generates suspense. The scenes with Godzilla are quite nerve wracking, but it is the emotional turmoil he causes that leaves the impact. I LOVE that sequence which begins with schoolgirls singing and slowly evolves into a montage of what Godzilla left behind during his attack. It’s so damn haunting and heartbreaking! I felt so bad for Japan! The references to the atomic bomb made these moments more chilling than they already were. I also loved the big scenes of the city on fire. Ishiro Honda has many talents, but very few people can evoke the terror of death and destruction like he can. 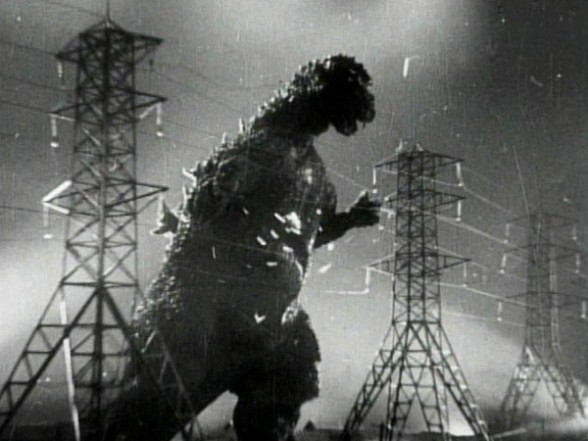 Unfortunately, Honda’s vision is slightly diminished by Morse’s tampering. Slightly. To be fair, Morse isn’t really at fault. His scenes are competently directed, and the editing made me believe as a kid that Raymond Burr was always part of the movie. However, now it’s quite obvious that Burr was never there. There are too many scenes that have him talking to doubles of the original cast (shot from behind) or people are looking in the wrong direction. It brought some unintentional smiles to my face, but I have made my peace with this ‘flaw’. Also, Steve Martin (Raymond Burr) seems to have way too much prestige for a reporter, because he sure has access to just about everything that you’d think the Government would want to keep secret (especially from American reporters). To make scenes even more awkward, the dubbing is horrible. For some reason I never noticed until now, but the characters aren’t always dubbed. Sometimes their original voices will say the characters names, or even say a sentence or two in Japanese, but when the dubbing comes, they sound completely different. Now, in almost every dubbing, the voices sound different from the original actors. But here, their original audio is mixed in with the new dub, making it more obvious. Example, Serizawa says in his real voice, “Emiko-san“, and his voice is quiet and soft. Then he says something like “You must keep this a secret” in his dubbed voice, which is more firm, loud, and almost unintentionally funny.

I’m not surprised that the love triangle would get cut down, but why remove a lot of the action? There is still a lot of city stomping, but a lot of carnage is missing. Perhaps the much darker tone presented in the original wouldn’t have worked as well with American audiences. This is also represented by the ending of the movie. “Gojira” ended with a total downer. Here, nothing is really different other than the dialogue, turning it into a more bittersweet ending. Despite not caring for these changes, I will say that the reporter narration actually does work here. It gives the film almost a documentary feel, which compliments the events nicely. There were a few improvements. The movie starts off showing the ruins of Tokyo and then has a flashback to what leads up to its destruction. I thought this benefited the narrative and the opening shot alone is worth a thousand lines of dialogue. Finally, inserting Raymond Burr’s character in that attack adds to the intensity. In the original, none of the main characters are directly in peril (until the end) so it was nice to add some new tension in there. I really have to give Morse credit for emulating Honda’s atmosphere in those sequences. So even though I had criticized Morse earlier for his missteps, his successes really do deserve praise. 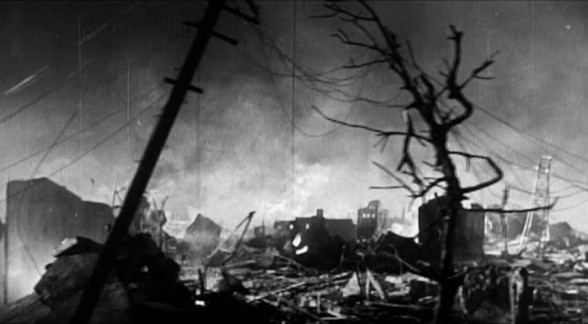 I also thought the characterizations were quite good. I found myself feeling for the trio of characters, as their normal lives are sort of in turmoil at this point. Doctor Serizawa definitely gets the most compelling conflict. I think he’s one of the most tragic characters to ever grace a film, especially in the Godzilla canon. He has to decide whether to use the Oxygen Destroyer, a potential weapon of mass destruction, against Godzilla or just continue to watch as Godzilla destroys everything. Strangely, while this is likely unintentional, it almost appears as if Ishiro Honda is sympathizing with the plight of President Truman when deciding whether or not to use the Atomic Bomb. Another sad aspect of Serizawa is that his fiancé, Emiko, is actually in love with another man (Ogata). Despite her attempts to tell him, she never does. I was under the impression that Serizawa knew all along. Still, the fact Emiko ultimately betrays his trust by revealing his secret must have crushed him. If you’ve seen the movie, you know his final decision is in vain. More Godzilla’s attack, and the Oxygen Destroyer returns as a monster itself in “Godzilla Vs. Destroyer“. So I really felt for the guy. But I sympathized with everyone, including Emiko. Steve Martin doesn’t get any kind of character arc, but Burr has so much charisma that he becomes the most entertain character anyway. Whether you like “Godzilla, King of the Monsters” or not, I personally believe every flick would benefit from footage of Raymond Burr being spliced in…even if the editing isn’t very good. Burr is just that awesome.

What about Godzilla himself? This is definitely not the friendly guardian of earth or the territorial anti-hero often associated with the name ‘Godzilla’. He’s pretty monstrous, but not necessarily malevolent. Whereas Godzilla from “Godzilla (2014)” was an actual character, Godzilla from “Godzilla, King of the Monsters” is presented as a force of nature. The full body shots of Godzilla are great, and because the picture is so dark, it’s not as easy to tell that we’re watching a dude in a suit stomp on model cities. While I suppose many of the effects haven’t aged well in general (the toy helicopter was pretty laughable), some shots look impossibly believable. Many have complained about the close-ups of Godzilla’s face, but I didn’t mind those. What I did mind was how Godzilla looked nothing like Godzilla during his first appearance. Did the filmmakers change their mind as to what he looked like after filming that scene? Even as a kid, that one shot always bugged me. The raditation breath enforces the metaphor, but it was also just a cool addition to the monster. His roar is genuinely freaky, being much more low pitched than what we’re used to hearing come from Godzilla’s mouth. Overall, Godzilla himself was awesome. Oh yeah, what about the classic score? It’s classic, of course! It definitely has helped made Godzilla an icon, ranging from adventurous to frightening.

“Godzilla, King of the Monsters” is arguably the most important Kaiju flick ever made. In many ways, I’d say it’s even more important than the original cut. The original cut is superior, but this is the movie that people tend to remember. It helped introduce the west to Godzilla, which would’ve been impossible in the mid 1950’s without many of the changes, removals and additions. If Ishiro Honda deserves credit for helming a masterpiece, Terry Morse deserves credit for making that masterpiece accessible to the audience that would not have been interested in a Japanese movie about fictional ramifications of the atomic bomb- even if the original version was watered down in the process.. Without “Godzilla, King of the Monsters“, the franchise would’ve only been popular in Japan. Sure, we become more aware of the miniature sets and the dubbing is awful, but it still is quite effective. Nowhere near as effective as “Gojira“, but effective all the same. When I wrote this review a few years prior, I think I was being too harsh on this cut for simply being inferior. Now that I’ve given it another chance, my opinion has changed for a third time. I love this version, warts and all, even if I prefer the original.

DISCARDED MATERIAL: Raymond Burr(Steve Martin) is credible considering he didn’t have much to work with. To me, he has become somewhat of an icon himself. He also appeared in “Godzilla 1985”, which was originally “The Return of Godzilla”, even worse spliced in scenes. As for the rest, keep in mind the dubbing is so bad it often hurt the actors. Momoko Kochi(Emiko) wasn’t that great in the original and the dubbing makes her look even worse. Akira Takarada(Ogata) bored me in this version. Akihiko Hirata(Doctor Serizawa) still rocks, even with the bad dubbing. Takashi Shimura(Professor Yamane) also is good enough to beat the bad dubbing.

Overall: I’d recommend “Godzilla, King of the Monsters” for the sake of its cultural significance and for the fact that it is a really good monster flick.