I saw “Curse of the Golden Flower” when it was first released throughout the U.S in 2006. Like all big boned dramas that maybe had one or two big fight scenes, it was marketed as an epic martial arts feature. I left the theater acknowledging it as a good movie, but I wish it had more fist fights and sword battles. Now that I’ve gotten over the bad advertising, I can watch “Curse of the Golden Flower” without any petty hangups. I can watch it as a tragedy, filled with color, intrigue, drama and even some epic combat. As such, I thought it was SUPERB!

(Written and Directed by Zhang Yimou) 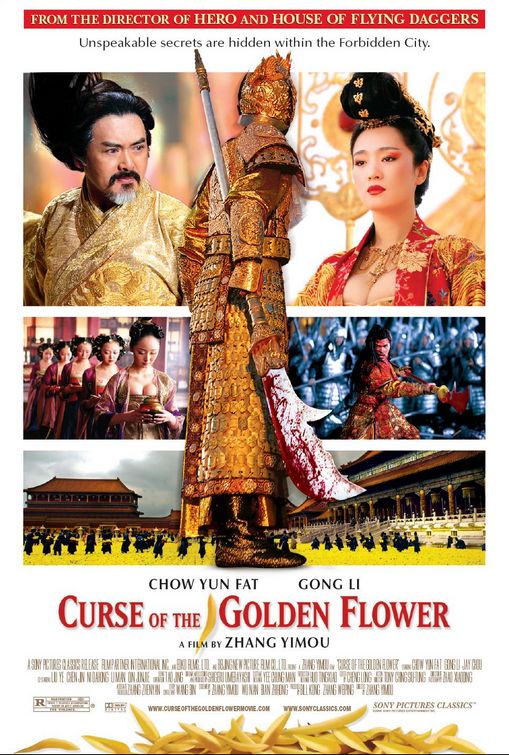 Plot: Oh dear, describing the story is not going to be easy. The Emperor (Chow Yun-Fat) has three sons: Wan (Liu Ye), Jai (Jay Chou) and Yu (Qin Junjie), the latter two being the sons of the Emperor’s wife, Phoenix (Gong Li). They seem like the perfect and noble family, but they have some nasty secrets. The Emperor is having his wife poisoned, possibly because she was having an affair with Wan. In retaliation, she begins to plan a coup, hoping to make Jai the new emperor. Regardless of how it ends, victory for either side will be Pyrrhic at best.

Zhang Yimou is primarily known for his big budgeted epics, especially in the west, so it’s no surprise that he’d made an even more lavish feature when given the biggest budget in Hong Kong history (at the time). With “Hero“, the beauty came from the surreal cinematography and with “House of Flying Daggers“…Honestly, I remember thinking that film was sort of bland so can’t really remember what he relied on there. “Curse of the Golden Flower” is much more about set design and while it couldn’t resist the ‘thousands of CGI soldiers’ effect that was probably inspired by “The Lord of the Rings“, it seems intent on being relatively old fashioned with its spectacle. For one, there are thousands of extras and Zhang frames their presence meticulously. The Palace is a massive set and the colors are bright and vivid. I noticed that for the exterior sequences, the colors are more singular for large patches. The soldiers are either purely gold, black, grey, red,ect. Those yellow flower pots at the end don’t even seem to have a blemish. It’s just pure yellow. Naturally, it makes for a great effect when blood starts splattering on them. Plus, the director captures all of this in wide shots baby, so you see the movie in all of its glory.

The interiors, however, are a complete contrast. Whereas outside, the sets are large in scale, the hallways are almost completely claustrophobic. There are a handful of shots of characters walking down them alone, perhaps representing their inner loneliness. But there’s nothing bleak about the locations appearance. The floors, the curtains and the costumes are filled with all sorts of different colors. The props also appear authentic, but in a stylized kind of way. Everything in this movie looks great, but it never settles on just one kind of beauty. But all of this is just the outer shell. Does it have substance on the inside? 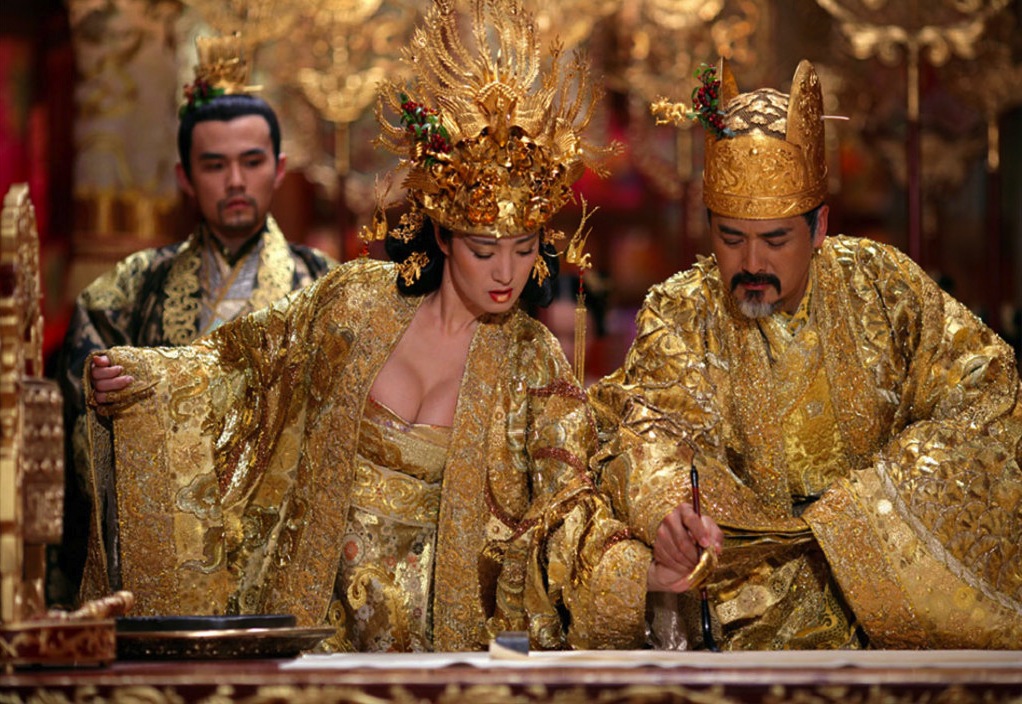 Many have criticized the movies rather complex plot, which is filled with all sorts of crazy subplots. I guess it might be hard to follow for some, but I thought it was fascinating. There is something epically Shakespearean about how all this tragedy and drama plays out. This is obviously because I was captivated by the entire cast of the characters. What I love about all of the characters is that they aren’t caricatures. The villains aren’t beyond redemption and the heroes aren’t above damnation. The Empress, for example, can be seen as a righteous woman who is justified in her coup. But she’s also shown to be cold, snobbish and is clearly manipulating her son. The Emperor can be seen as a total monster, but he clearly loves his children and seems to have remorse for some of his actions. The only character who is typically ‘good’ is Jai and naturally, he was the most boring character in the movie. It’s not Jay Chou’s fault, it’s just that the character is flat compared to the rest. The actors in general are superb, with some of them delivering performances that stand alongside their best work. Chow Yun-fat and Gong Li especially are amazing, stealing whatever seen they are participating in.

I’m also a sucker for intrigue when it is done right. Everyone is scheming against each other and part of the thrill was never knowing what was going to come next. The story ultimately goes into some pretty bold territory, which continuously kept me on the edge of my toes. I’d presume it’s not quite as startling in Hong Kong (where the story is relatively popular), but unpredictability leads to suspense, which leads to a satisfying movie experience. So yes, I thought there was substance because the story was powerful and the characterizations were strong. Any problems? I guess. The final shot was maybe a little too self indulgent and I’m not sure why the Empress was being poisoned. Some motives were a little vague, but that might be better as it means a lot of this movie relies on subtext. 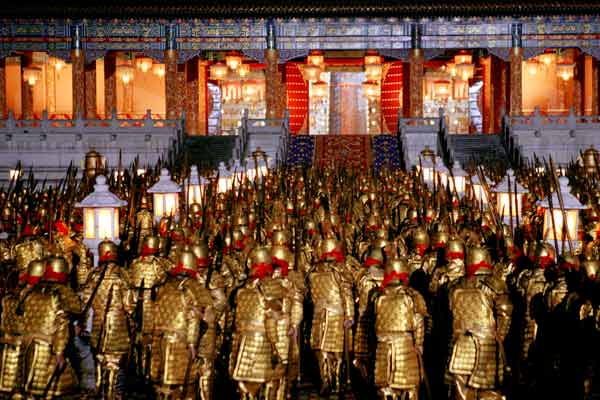 In terms of action, the film relies more on its cinematic appeal than its choreography. There is one hand-to-hand fight scene, which relies on slow motion, wire works and CGI, but the technique used looks pretty good. There are only two single fights throughout the first half. But near the finale, there are epic battles involving archers, swordsman, lancers, ninja (!!) and a spatula wielding doctor. Zhang Yimou uses these fights more for dramatic effect. 10,000 knights clad in gold march the palace and fight with the Chinese equivalent of ninja. We’re not supposed to focus on the choreography as much as we’re supposed to notice blood spilling on golden armor or bright yellow flowers. Hell, even the melodramatic music almost takes the stage over the choreography, but it somehow worked. Some of the ideas themselves are pretty cool, like when they start using spears as ladders. One element that I appreciated about the action was the strategy involved by all the parties. Don’t expect traditional kung fu here, as this isn’t anymore of a martial arts movie than “Troy” or “Pirates of the Caribbean” is. But the fight scenes are brutal and exciting in their own right, so they satisfy.

John Woo would perfect this kind of visual style with “Red Cliff“, but even his movie overlooked that the story is the most important thing within a movie. “Curse of the Golden Flower” is one beautiful movie and to this day, I’m not sure if I have ever seen such a mastery of set design. But I was just as interested in the plot and how it played out. I was entranced by the characters inner workings and the decisions that sprung from them. Everything about this movie ‘clicked’ for me, even if it’s not perfect.

Violence: Rated R. Not gory, but it is pretty violent.

Nudity: None. The majority of it is implied. Most of the women have big breasts and wear tight corsets though. Yummy!

Overall: “Curse of the Golden Flower” is a superb drama/intrigue/epic that does pretty much everything right. I loved it. Just know what kind of movie you’re getting into.