Ah, western-horror hybrids, why are you such a rare gem? I ask that question often in my reviews. I’m pretty sure I’ve ranted about this even when discussing movies that have nothing to do with either genre! It still baffles me how there isn’t a single one I know of from the 60’s. You’d think that with Gothic horror films and spaghetti westerns flourishing, someone would be like “Hey, why don’t we combine these two”? But it didn’t happen and all I can do is cry myself to sleep every night. Well peeps, my wait is finally over. “The Burrowers” is here and is everything I wanted out of a western-horror hybrid!

Plot: The film takes place in the wild west (yay!) and opens with a family being assaulted and abducted by some unseen enemy (…yay!). The eldest daughter happened to be the love interest of Coffey (Karl Geary), who discovers the mysterious crime scene. The perpetrators appear to be Native Americans, so a posse is formed to hunt them down. They include the hardened John Clay (Clancy Brown), the skilled gunslinger Parcher (William Mapother), Henry the sadistic officer (Doug Hutchison), a former slave named Callaghan (Sean Patrick Thomas) and the young Dobie (Galen Huchison). However, it turns out that the Native Americans aren’t any better off than they are. Both sides are being preyed upon by strange creatures that live underground.

Review: It should be noted that while “The Burrowers” has earned more praise than criticism, I am mostly alone in my enthusiasm for the film. Personally, I think it handled the molding of two genres very well. As it is, you have a sturdy western. You have actors that look the part (and do admirable jobs), speak the right dialogue and wear the right costumes. It has the right locations, music and atmosphere. But it’s greatest achievement is that these characters feel like they would belong in another western. The dynamics in their relationships, the tactics, actions and responses are all very familiar. Watching the characters converse and bond was fun!  For a large portion of the film, you almost forget that there are monsters looking about. Instead, you feel like you’re watching a solid western film.

Then the “horror” begins.

There is the occasional scare here and there. Outside of the opening, the creatures attack the group a few times or there will be some quick jump scare or boo scare. But there reached a point where the dread starts to seep in, effecting the characters personalities. Guys who we expect to be heroic are reduced to useless cowards, characters who are competent make devastating mistakes and sometimes someone will die whom you don’t really expect to die. I said that these characters were ‘familiar’, like the cast you’d see in a genuine western, but they only set everyone up as such so they can invert the stereotypes. Yet I never wanted anyone of them to die. 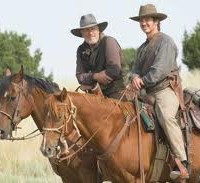 The film generally relies on the characters effect on us. It wants us to care for them and I obliged. After that, it relies on atmosphere. As the film moves on, the cinematography becomes bleaker and the mood becomes more and more grim. The most haunting moment is probably when they discover what the Burrowers actually “do” to their victims. It gives us glimpses at why we should be afraid, but what scares us the most is what we don’t see. There are still quite a few jolts and they work too, but the movie wants to be more creepy than scary, although it has a few scary moments too. Speaking of which, the monsters themselves are pretty freaky. We don’t see them often, but their designs are derivative of “The Descent” (except maybe scarier?). Once again though, it’s what they do that makes them terrifying.

Perhaps the most depressing aspect of this movie is its social commentary on racism. Or is it even that? The most prominent example of racism comes in the form of Officer Henry, but he gets angry when his own (native) scout is attacked by another character. He probably saw the scout as his property, but I look at the real commentary to be man’s inhuman nature to its fellow man. To say that this movie is about “white’s hating Indians” is wrong because the we see white’s discriminate against other whites (the Irish, at least) and tribes of Native Americans hating on other tribes, not to mention that they hate whites too. If everyone actually treated each other equally, then maybe none of this would’ve happened. 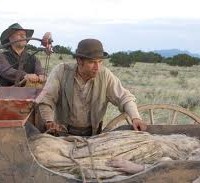 Are there any flaws? Sure. The direction usually is strong, but there are a few moments that seem off. The monsters look CGI at times and that doesn’t gel well with the good practical effects. I also thought the movie was a bit too darkly lit during the night scenes. Sometimes it was effective, other times it wasn’t. I guess a few parts were sort of redundant too, but those faults were minor and I was mostly devastated by this movie. It created captivating characters and I left the movie feeling like I had endured everything with them. It is a good western and it is a good horror film, but is a great combination between the two.

P.S: I suppose some readers might be confused as to why I haven’t mentioned “Tremors” or “Red Hill“, two successful western-horror hybrids that I recently reviewed. Honestly? They’re modern day westerns and while they’re awesome, it’s just not the same.

Violence: Rated R worthy. It can be graphic, but it’s not sleazy in its violence.

Nudity: None, although there is talk of rape.

Overall: “The Burrowers” is a must see for anyone who wishes to see a good western-horror film.