I warn you of this because it is possible that I am being unfair to “Bodyguards and Assassins“. More viewers seemed to have liked it more than I did, so perhaps I’m more angry with the distributors than I am with Teddy Chan’s film. But maybe it’s not THAT great of a movie either. My review will focus more on why I felt the film failed to make an impression on me EVEN as a drama. But I don’t want you to presume that “Bodyguards and Assassins” is devoid of merit. I think it’s an okay movie that will either work on you or not, regargless of its objective quality. It just did little to nothing for me.

Plot: “Bodyguards and Assassins“, like most epics of its ilk, has too little plot and too much plot so these descriptions aren’t easy to sum up. The film details with the historical uprising that I believe was inspired by Dr. Sun Wen. However, he’s more of the plot than a real character in the movie. Instead, it follows many different (fictional) characters who are influenced by the man and his idea of ‘revolution’. This includes Professor Chen (Tony Leung Ka-fai),  one of the more influential members of the revolution, a businessman named Master Li (Wang Xueqi), a beggar martial artist named Liu (Leon Lai), a troubled police officer named Shen (Donnie Yen) and many more. They’re all embroiled in the revolution and realize that it’s essential Sun Wen survives.

I don’t hate “Bodyguards and Assassins“. As an epic, it has everything that one would expect. It has a larger than life cast who all do solid jobs in their roles. Besides the aforementioned guys, there is Eric Tsang (the police Chief), Simon Yam (a fallen General), Jacky Cheung (Teacher who gets killed in the opening scene), Hu Jun (the antagonist) and other faces I recognized whose names I cannot remember. The sets are ambitious, the cinematography is gorgeous and when the action really begins, it’s all very large scale stuff. There’s a lot of thunderous music and big boned drama. But it is an epic DRAMA, so does the drama succeed?

For me? No. While plenty of time is given to fleshing out the characters, I never saw them as anything but cliches. They are based in cliches, do cliched things, have cliched backstories and their fate’s are often cliched. You know every decision everyone will make 30 minutes into the movie and you know when they are doomed to die long before it happens. Hey, so and so is getting married! I wonder what’s going to happen to him! For me, all this movie was during the first hour and a half is people crying and delivering speeches about the revolution. It’s moving at first, but eventually becomes tiresome. What I hate the most is how heavy handed it all is. The director REALLY wants you to care about what is going on. When people cry, it’s often in slow motion with dramatic music playing in the background. When they deliver speeches, the camera slowly moves in on them as the now inspiring score suddenly picks up. It failed to effect me, so I didn’t care. Obviously though it effected many people, because there are more positive reviews than not and the positive reviews stress at how “human” everyone is. I disagree, but I am not the voice of cinema, so it all comes down to you. 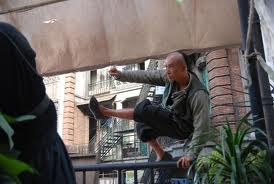 Actually, it’s sort of odd that this movie appears to be unsure at what it wants to be. It’s not REALLY a historical film, as the bulk of the characters are fictional. Yet it lists their birth and death dates as if they are, which is really misleading. As a drama, it balances its massive cast expertly in terms of screentime, but never gives anyone enough for them to become anything more than their designated cliche. As an action movie, well, we’ll get more into that later. Someone else pointed out that the film can’t even be accepted as a patriotic film because most of the people who fight and die did not enter the fray for patriotic reasons. They enter out of respect for a friend, or a sense of debt to someone, or even their own familial reasons. So all of these speeches mean nothing when you think about it. Ironically, the only character development that really moved me was the villains. His final line makes you wonder if the movie really messed up somewhere or is challenging the patriotic mentality in general. Maybe that was the point. Patriotism is grand and all, but both sides have a lot of it and all it leaves is piles of corpses. I’m not sure, the movie never really allows its own message to blossom. Either the filmmakers lost focus as to what they wanted to say or they just failed at executing its commentary.

There is only one fight within the first hour and a half and it kind of sucks. It’s choppy, poorly edited, framed and it made me a little dizzy. However, once the meat of the action begins, it is rather spectacular. While Teddy Chan continuously tested my patience with his quick camera tricks and tight editing, the choreography seemed strong and I liked how the fights were sped up. They get better as the movie progresses and the choreography eventually found its own rhythm. The fights are fast, brutal, ambitious and sometimes really creative. They even use the wire works so effectively that they mostly blend in with the more old school tactics. Donnie Yen, of course, is the coolest character in the film. He fights swiftly and is believably badass, but I love how messed up his face is at the end. Plus, he gets the most jaw droppingly badass scene in the whole film (man Vs horse; ITS AWESOME!).

Unfortunately, by the time the action started to rock my world, it was just too late. I was bored, exhausted and waiting for this movie to end. Hell, even the finale is peppered in with…you guessed it, people crying and delivering speeches. I did not like this movie because I did not understand it. I did not understand what it was aiming to be and felt it under-achieved in everything that I suspected it was trying to be. But the action, locations, cinematography, music and acting are all stellar. Plus, it seems to be making an impact on other reviewers, so don’t take my word as truth. If you like these kinds of epics, I’d say “Bodyguards and Assassins” is worth a look because you might like it. But you might not, so keep that in mind.

Note: I just want to make a point that I do like drama’s (Jackie Chan’s “Little Big Soldier” amazed me) and I can even appreciate confused epics (“Legend of the Fist: The Return of Chen Zhen“, also starring Donnie Yen). But these kinds of movies rely more on their impact on you- the viewer- because their technical achievements are a given but mean nothing if you aren’t engaged.

Violence: Pretty violent, although some of the blood is too CGI-ish.