A fan asked me to start reviewing some of the movies belonging to iconic director David Cronenberg, which seemed like a given considering the impact he has had on the horror genre. Yet for whatever reason, his genre output and my reviewing ‘career’ have never crossed paths, so I immediately wrote his name on the request list. When it came time to add something, I looked through his filmography on netflix and realized how inexperienced I was in the world of Cronenberg. I recognized many of the names of the flicks, but hadn’t actually sat down and watched them. Amusingly, of the three films I had previously viewed, only “The Fly” was even remotely close to horror. The other two were “A Straight Story”, “A History of Violence” and “Eastern Promises”. I remember disliking “A Straight Story”, but that was probably only because I was a kid who wanted that lawnmower to come to life and start eating people…which never happens…I can recall a lot of the content though, so it must’ve been pretty good to leave such a lasting impression. “Eastern Promises” wasn’t great, but it was a really good gangster flick that relied on brutally realistic violence and effective performances from the actors. “A History of Violence” felt like a great movie and a subpar movie were constantly fighting for dominance, only for the battle to end in a draw. For the most part though, don’t expect me to cover these kinds of movies. I’m trying to stick to martial arts and horror. But I did end up watching the ones that I thought I’d review and yet when it came down to writing something, very little inspiration gripped me. I thought about this and came to the conclusion that Cronenberg isn’t a horror director. These examples of his works might borrow elements from the genre, but tend to be rooted more into science fiction and drama. Nevertheless, I wanted to talk about his works in some capacity, so why not FINALLY get to filling out my “Fistful of MartialHorror” subpage? If you’ve forgotten about “Fistful of MartialHorror“, don’t worry…I kind of did as well. These are mini-reviews and plan on doing more in the future! 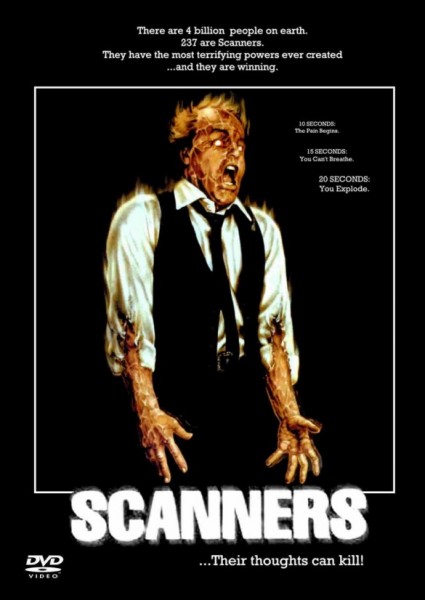 Vale (Stephen Lack) is a psychic recruited by a mysterious organization to hunt down a psychotic with similar powers (Revok; played by Michael Ironside). “Scanners” is the type of movie that I respect more than I enjoy, although admittedly the hype certainly affected my viewing experience. The special effects are really good and it’s stunning how much is accomplished despite the limited budget. There are a lot of creative ideas that makes “Scanners” stand out and Cronenberg shows off his ability to develop iconic imagery. If it’s not the final duel, it’s the infamous exploding head that will stay within our minds. The pacing is inconsistent, constantly speeding up and slowing down so rapidly that I grew exhausted around the half way point. I also couldn’t get behind the acting- which ranged from too hammy to too stale. While Ironside is excellent as the villain, I thought Lack was…lacking… as the protagonist. His wooden performance was actually intentional in order to emphasize the contrast between the dull Vale and charismatic Revok, but it worked too well as he ended up boring me. Nevertheless, “Scanners” is the perfect definition of a ‘cult classic’ and even its apparent weaknesses help add to the films identity. I’m sure I’ll remember it, even after I’ve forgotten better Cronenberg flicks. I don’t think I’d go for a second viewing, but it was worth the first. “Scanners” is science fiction mixed with action, although the gore can convince some viewers that they are watching horror. 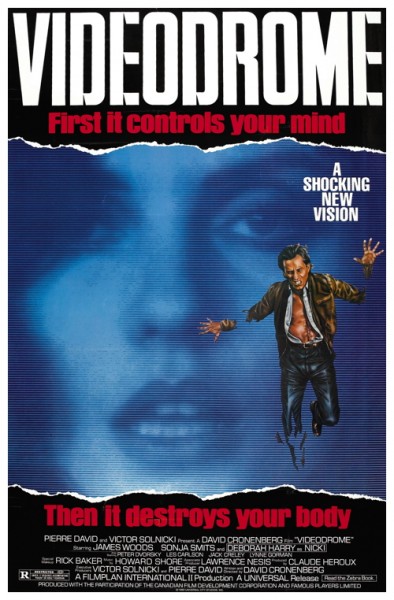 In the future, the masses have become desensitized to sex and violence in the media, forcing television stations to become even more exploitive with their content in order to keep ratings high. Max (James Woods)- the president of one of these stations- discovers a video that might revolutionize the industry, as the violence seems unnaturally real, but something about the tape has distorted his reality. Plagued by visions, he becomes involved in a deadly conspiracy that may or may not be a product of his own mind. “Videodrome” is awesome, boasting all the strengths of “Scanners” and none of the weaknesses. The visual effects are terrifying, mesmerizing and incredibly inventive. But beyond looking cool, they have a certain depth to them. They all mean something, tying into the protagonists psyche without the movie spelling it out for us. “Videodrome” manages to blend in style and substance so seamlessly that it’s hard to tell the difference. Max is very likable and sympathetic despite his questionable tastes, thanks to the charming performance of James Woods. This is probably Cronenberg’s best work, an easy masterpiece. “Videodrome” is a science fiction themed, psychological thriller that relies a lot on body horror. I strongly considered doing a full written review, but I couldn’t think of anything more to say. 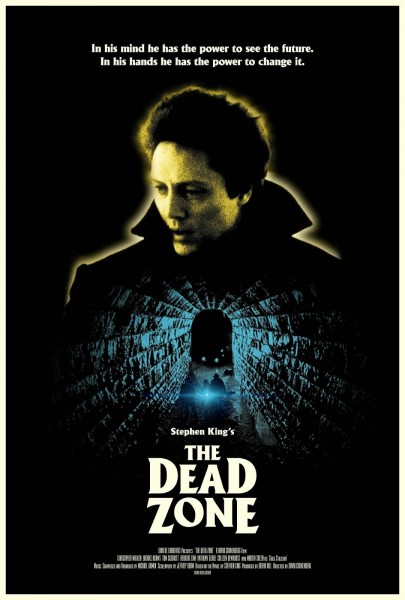 Johnny Smith (Christopher Walken) wakes up from a 5 year coma and learns that he has developed clairvoyant abilities, which he uses to save lives and hunt a vicious serial killer. But when a vision reveals nuclear holocaust, he is faced with an incredible moral dilemma. The episodic narrative makes it difficult to care for the majority of the supporting characters and their relationships with our (admittedly interesting) protagonist, but this is based off a novel by Stephen King- and from what I hear, is a very faithful adaptation. The movie plays out like a live action novel, for better or worse. While not my favorite Chronenberg feature, this dramatic thriller does have some incredibly terse and suspenseful moments. The acting is exceptional too, although would we expect any less from a cast of this caliber? Er, actually, the answer is yes…But “Dead Zone” was made before Christopher Walken, Martin Sheen and Tom Skerritt learned the craft of sleepwalking through their roles. 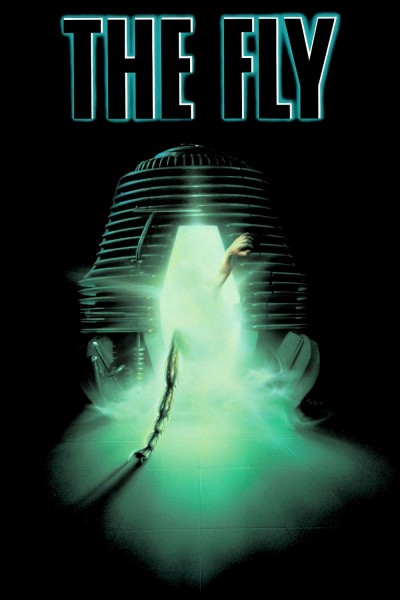 Seth Brundle (Jeff Goldblum) is the scientist who has learned how to teleport inanimate objects and his love interest, Veronica (Geena Davis), is recording the experiment. But when he tries to teleport himself, a fly gets in the machine and their DNA is spliced together, causing Brundle to mutate into something…monstrous. “The Fly” is arguably Cronenberg’s most famous feature and it certainly deserves that fame as it’s pretty phenomenal. The special effects are amazing and even as of 2015, are horrifying to behold. You might find the idea of a man-fly to be silly but trust me, once you see what Brundle becomes, you will be enthralled and repulsed at the same time. Underneath the awesome effects lies a pretty good story, with characters who develop over the course of the film. I thought it was interesting seeing Brundle’s personality change along with his body- especially when his humanity begins to leave him. It’s very tragic, especially as he is fully aware of what is happening to him. Yet the token asshole ex-boyfriend actually seems to realize he’s an asshole ex-boyfriend and works to make himself a better person- something you don’t see often from this kind of character. Caught in the middle is Veronica, who also aspires to become a better person thanks to her relationship with Brundle, but finds herself in an impossible situation. “The Fly” accomplishes a lot, despite its relatively short runningtime. I almost feel it should’ve been longer, as some transitions felt…abrupt. Nevertheless, it’s a very powerful film with a heartbreaking and intense finale. “The Fly” is more of a dramatic romance, heavy on science fiction and body horror, but it doesn’t start stepping into thriller territory until the third act.

Overall: I feel like there should be a new genre called ‘David Cronenberg’, which is comprised entirely of David Cronenbergian flicks, because his films tend to defy the rules and conventions of established genres. They exist within a genre of their own. Should we call the subjects of this page horror? Not really, but at the same time, you can’t really call them anything else. I suppose you can argue that they’re an arthouse interpretation of horror, as they are pretty artsy, but even that doesn’t sit well with me. Arthouse cinema is designed exclusively for a highbrow audience and I don’t believe even those walls can contain Cronenberg. You don’t have to be a critic who spends the runningtime searching for symbolic imagery in order to enjoy these films, even though it’s available if you are that kind of viewer. But I sincerely believe that anyone (with a strong stomach) can make a positive connection to the likes of “Videodrome” and “The Fly“. The Cronenberg experience is a unique one and so far, every Cronenberg experience has been something entirely different. “Scanners” is not really like “The Fly“. “Dead Zone” is not really like “Videodrome” and yet, they all share a similar vision. Each of them embody everything that is Cronenberg. Even his newer works, such as “A History of Violence” and “Eastern Promises” don’t really fit my definition of mainstream, even if they are more firmly rooted within their respective genres. The visuals might not be as prominent and on the surface, they resemble ordinary films. But the content is constantly defying our expectations, which makes his movies special. I have heard that sometimes his genre-bending backfires and the eccentricities- that I found to be so charming- are also very chaotic. They might give the amazing “Videodrome” its identity, but they’re also responsible for “Cosmopolis” being tedious- allegedly. This doesn’t deter me though, as sometimes true genius can be alienating. However, do not expect me to cover “Maps to the Stars“, the aforementioned “Cosmopolis” or any of his other works that have nothing to do with the horror (or martial arts) genres. After all, they don’t call me SatiricalDrama or DramaThriller. They call me MartialHorror…primarily because that’s what I tell them to call me. And because I want to stay close to those genres, if I can’t stay within them.

COMING SOMEDAY: I’m not sure whether any of the following will be full written reviews, or if they will be posted here. There is no particular order to this list and I chose to avoid saying ‘Coming Soon’ because I am probably more well known for my tardiness than I am for my reviews! There are a lot of ‘maybes’ within Cronenberg’s filmography, but for sure you can expect-