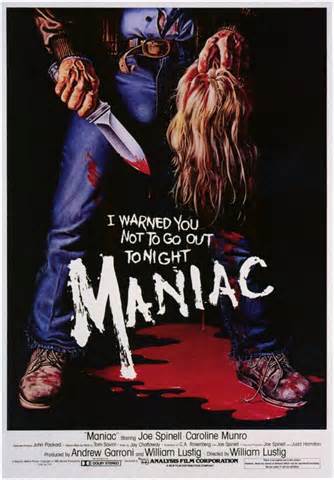 Plot: Frank Zito (Joe Spinell) is a psychopath who kills young women and collects their scalps, but he finds himself conflicted when he encounters a mysterious photographer (Caroline Munro).

“Maniac” is an exceptional slasher, but it is not for everyone…and by everyone, I also refer to slasher fans- a genre that is already not for everyone. When you consider their appeal, slashers are supposed to be thrilling or maybe scary, but in a fun kind of way. “Maniac“, on the other hand, contains a bleakness that keeps me from wanting to call it ‘entertaining’. This is a very dark and depressing slasher, one with a methodically slow pace and a desire to make the kills as uncomfortable as possible. I can see many viewers calling “Maniac” boring and I wouldn’t blame them. But I thought the filmmakers did a masterful job at creating a never-ending feeling of unease thanks to the atmosphere and amazing performance by Joe Spinell- who is adorable and terrifying at once. But perhaps it works a bit too well, as I have absolutely no desire to experience this…masterpiece (??)…again.

It’s easy to compare “Maniac” with “Henry: Portrait of a Serial Killer“, as both films strive for a chillingly realistic portrayal of the deranged mind. There is a lot of reliance on the acting, which is excellent, although there is a dash of unintentional hilarity to be found within some of the lines. Much of the narrative is built around Frank bantering with his mannequins and it is a testament to Spinell that he is able to make this interesting. Yet each kill unhinges him even more, so the dialogue becomes increasingly incomprehensible as the film progresses. Frank is a pathetic person who seems harmless at first glance, but when he enters ‘psycho’ mode, he is outright scary. Watching his descent into madness is harrowing and adds to his creepiness. Even his softer scenes have an edge to them, because he can snap at any moment. “Maniac” is claustrophobic, but not only because it has limited locations to work with, but because you feel like you’re becoming trapped within the confines of Franks’ insanity. By the time the 3rd act rolled around, I was in desperate need of a shower, just so I can get the imaginary stench of blood and filth off me. This is what atmosphere is supposed to do, children, and we haven’t even gotten to the aesthetics yet. 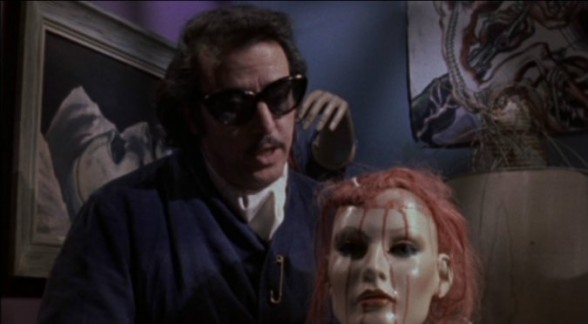 The violence is definitely graphic, with the highlight being the infamous ‘shotgun’ death. Tom Savini did the effects and even though he probably had less money to work with than usual, he still delivered awesome and believable work. But even as insane as the gore can be, there’s a realism that makes the kills hard to watch. When someone gets stabbed, we will likely see the agonized expressions on the actresses faces- this shit hurts!- and none of the gore is ever clean. There’s a sexual element that causes the kills to be even more unsettling- women seem to almost make orgasmic faces as life escapes them. “Maniac” not only makes violence unpleasant, but even the sex itself is uncomfortable to behold. I didn’t find any scene to be erotic, even when the female characters are trying to be erotic, simply because of how awkward it is. The locations are menacingly seedy, even though they’re all very familiar. There is nothing that unusual about these sets, yet apartment complexes, neon signs and subways all look unnaturally suspicious thanks to the shadowy lighting and chilling music. The sound design and score arguably were the most important pieces when designing this atmosphere and those cues will likely haunt my dreams long after I’ve seen the film. The exteriors are cold and murky, whereas the interiors are bright and vivid with color- I love those kinds of contrasts. The director was apparently inspired by the Italian thrillers popularized by Bava and Argento and it shows in both the experimental cinematography, editing and color-scheme. Yet while providing an aesthetic appeal, none of it ever looks pleasing to the eye. Those macabre visuals of blood caked mannequins are about as spooky as they are stylish- and they certainly are stylish. Thanks to the atmosphere and acting, the suspense always managed to creep under my skin. But there is one stalk sequence in particular that stood out, where Frank is potentially following a nurse. The initial ambiguity mixed in with the actress’s growing panic and the feeling of dense isolation created the perfect formula for being terrified. The pacing was perfect as the movie patiently kept the hunt going…and going…and going…Brrrrr.

Sometimes “Maniac” struggles with its low budget and some of the supporting actors don’t quite work. The voice over of the Mom threatening to punish Frank as a child had to be the stiffest line reading ever…and by ever, I just mean off the top of my head. As I said though, the biggest enemy of “Maniac” is its lack of fun and slowness. If you think that this is not for you, then don’t bother watching it. Yet for those who feel like this might be the kind of slasher they’d enjoy, then expect your guts to churn. Expect to feel dirty from the experience. Expect “Maniac” to leave an impression on you, albeit one that will leave you repulsed and disturbed. Even though this is not necessarily my cup of soda and I did notice the flaws, I was immersed into the narrative so seamlessly that I was begging for a release. I don’t want any part of this crapsack world, dammit! Let me enjoy the upbeat exploits of Jason Voorhees, Michael Myers and Freddy Kruger! I need to experience happy things now that I’ve endured the grim “Maniac“.

Nudity: Some, but it’s not pleasant. Sex is a major theme.

Overall: “Maniac” worked its magic on me so well that I doubt I’ll want to see it again. But it’s a fine movie.