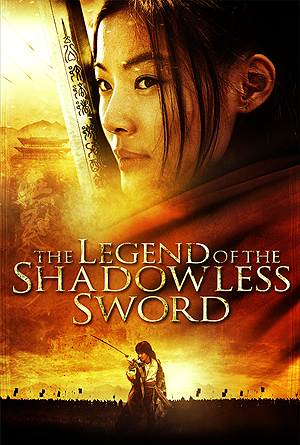 Plot: The last remaining Prince (Lee Seo Jin) of the Balhae Kingdom has been in exile, assuming a new identity in a town full of vagabonds. Unfortunately, his Kingdom needs him back due to the Killer Blade Army assassinating everyone else who could fill his position. They send a deadly female warrior (Yoon So Yi) to retrieve him, but the Killer Blade Army is hot on their trail and it doesn’t help that the Prince has no interest in his Kingdom. Also known as just “Shadowless Sword” and “Muyeonggeom“.

I spent quite some time in front of the computer screen, pondering “Legend of the Shadowless Sword“, a South Korean fantasy-fu epic that was filmed in China. It was a pleasant experience, but it failed to achieve greatness and I wasn’t sure why. The confusion stemmed from the fact that there is nothing glaringly wrong about “Shadowless Sword“. It’s strengths can even be considered exceptional. Yet I couldn’t bring myself to say I loved- or even really liked- the movie. There was something ‘off’ about it, but the ‘flaws’ were buried underneath the surface. After much consideration, I came to the conclusion that “Shadowless Sword” was just too ambitious for its own good.

“Shadowless Sword” is a nice little spectacle, resisting the urge to take the usual low budget shortcuts and use actual sets and locations, instead of CGI back-drops. If I’m mistaken and Green Screen’s were used, then I have to give it credit for making the CG appear authentic. The cinematographer is sure to exploit its settings to the max, but I also appreciated how understated the aesthetics are. It’s a gorgeous film, but it’s not trying too hard to look good. There are neat little tweaks to the various locations too, like what in the hell were those flags in the graveyard? I don’t know, but I liked them! The score is grand and eccentric at once, taking inspiration from a few different cultures. Some tracks would feel more at home in a King Arthur movie, others in a Samurai feature. Many might dismiss the music as out-of-place, but I thought it gave the film its own personality.

Yet my favorite aspect of “Shadowless Sword” had to be the costuming. Actually, it’s really the gimmicks that surround the various fighters. The Killer Blade Army is comprised of…NINJA, complete with those awesome straw hats and shuriken. Hell yeah! One of the villains is a warrior Monk who wields a giant hammer-like weapon and anal beads. Okay, I think those are actually prayer beads, but I was laughing my head off when he started weaponizing those anyway. I’m still searching for a kung fu flick where anal beads are used as a deadly weapon, but my search continues… Gun Hwa-Pyung (Shin Hyeon Jun) is the main antagonist and his appearance is a little weird- braided hair doesn’t exactly scream badass to me- but his fighting gimmick is freaking awesome. With a single slice, he can cause your body to practically explode! Actually, a few people can do this and I loved every instance of it. It reminded me of “Fists of the Northern Star“. The action is plentiful, but it more comes down to what you think of Wire-Fu. There’s a lot of wires and even CGI within the fight scenes, but I thought both fit within this context. The choreography isn’t amazing, but it is solid work for this kind of movie. I was pleased, even though “Shadowless Sword” isn’t the best of its ilk. It is startlingly violent though, with even arrows severing limbs.

But now we have to discuss some of the weaknesses, even though they sometimes hold hands with the good parts. The plot is very streamlined. The protagonists travel, the villains attack, the protagonists escape and the process continues. Almost always, one of them will get hurt and have to be nursed by the other, developing their relationship. Many will accuse “Shadowless Sword” of being redundant, but this isn’t my problem. My issue is that the script often comes across as scatterbrained, introducing characters or interludes that are pointless. The most noticeable part is when the duo confronts a gang who are mourning for their fallen leader. I kept thinking that they would return to play a part later on, but they never do. Was that divergence necessary? Furthermore, “Shadowless Sword” tries to humanize its villains during the second half but it ended up putting a bad taste in my mouth. The female assassin is one-dimensional until she’s forced to do ‘something’ for her master. It’s hard not to feel bad for her, but it just didn’t fit. I understand that they were trying to parallel the relationships, but I didn’t feel that point was explored enough. Gun Hwa-Pyung becomes more sinister as the finale draws near, so it’s unclear whether or not we’re supposed to sympathize with him. The girl is the opposite as she’s villainous during the majority of the running-time, but is fleshed out after we’ve already disliked her for so long. Many might appreciate this unusual character arc, but because the movie takes the side of the heroes, we’re supposed to be happy when the Killer Blade Army is defeated.

The problem is that “Shadowless Sword” has a very streamlined and simplistic narrative, but it seems to want to be episodic. Had it embraced the episodic structure, then they would’ve emphasized the side quests that our heroes find themselves part of. Maybe in the process, the character development that the villains go through would’ve felt more natural. Maybe the pacing would’ve been effected, but at least “Shadowless Sword” would be the movie that it wants to be. But the way it is, the character-oriented moments slow it down a bit too much. There are a lot of philosophical speeches, but instead of being inspiring or thought provoking, they struck me as desperate. There is plenty of pathos to be found here, but it’s not as deep as it thinks it is. This struck me the hardest when a revelation hits our reluctant Prince as to why his companion has taken an interest in him. I liked the idea, but it moves so fast- like everything else- that it never completely sinks in. Speaking of which, there are a lot of unanswered questions too. Why was the Prince exiled? What happened to his Father? There was something missing here and unless I took a bathroom break at the wrong time, that information diminished the character development. Thankfully, this criticism is at least partially blunted due to the chemistry between the cast members. Lee Seo Jin steals the show as the exiled Prince, showcasing lots of charisma and skill. The interactions between the characters might lack substance, but the actors and actresses keep them from being boring.

In the end, “Shadowless Sword” can’t decide what movie it wants to be and it ends up being uneven. It moves so fast that it undermines the character development, but then it will suddenly slow down in an attempt to flesh everybody out and it makes the final result a little exhausting. Nevertheless, I liked “Shadowless Sword“. I liked the cast, the props, the sets, the music, the direction and even the wire-fu. It provided enough of everything that I ended the movie with a feeling of fulfillment. But more importantly, despite having a familiar story, something about the execution feels different. The clashing cultures, the weird fighting styles and unique locations helped give “Shadowless Sword” is own identity. It’s impressive, but unlike similar films, this one doesn’t seem to be showing itself off. I’m torn between a 2.5/4 star rating and a 3/4 star rating, but I think I’ll be more generous because it’s difficult to pull off what it accomplished.

Violence: Rated R. It’s shockingly violent, although it’s cartoonish enough that it fits within the tone.

Nudity: None, but there is a quasi-sex scene (focuses on the actress’s face, not the act) and there is a reoccurring threat of rape.

Overall: “The Legend of the Shadowless Sword” is worth watching if you like wxia, wire-fu features. It’s a solid, if imperfect, example of that subgenre. Obviously if you don’t care for wire-fu, I doubt you’ll think much of this.