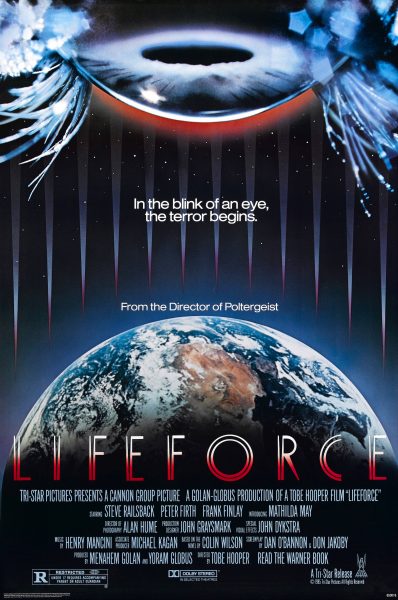 Plot: A female ‘space vampire’ (Mathilda May) is brought to Earth by a crew of doomed astronauts, where she promptly begins infecting the populace by draining them of their ‘life force’.

NOTE FROM AUTHOR- This is a cleaned up re-posting of one of my older reviews. I did not re-watch the movie or re-write this review, as I often will, but I did fix a few errors.

“Lifeforce” is another sad example as to why Tobe Hooper’s (“The Texas Chainsaw Massacre”) career crashed so loudly and perhaps gloriously, depending on your perspective. Despite the fact that it’s unclear how much of “Poltergeist” Hooper actually directed, it did for a short time turn him into the ‘next big thing’, finally giving him the opportunity to prove that he wasn’t a one-hit wonder. Hooper, getting a contract with Cannon films, was allowed to direct 3 big budgeted horror films- “Funhouse”, “The Texas Chainsaw Massacre 2” and the subject of today- “Lifeforce”, which has developed a strong cult following, albeit for some ‘questionable’ reasons.

“Lifeforce” suffers from many problems, but no one is going to criticize its production values. The film looks very expensive, with some awesome special effects and great creature designs. Hooper weaves a stylish, spooky atmosphere throughout many scenes and “Lifeforce” boasts an imaginative energy that could only be found within the mind of a mad man. There are a few wonderfully startling moments, and the finale was pretty spectacular too. Unfortunately, these strengths ultimately set me up for disappointment in the final product, because they deserved to be part of a better overall movie. Of course, they also keep “Lifeforce” from being a waste of time and obviously the fanbase will revere its successes and ignore its failures, so I’m trying to phrase my opinions in the most objective way possible.

It feels like Cannon threw $25,000,000 (a staggering budget for a horror film at the time, especially from Cannon) at Tobe Hooper and told him to make a movie, but despite this rare opportunity, he had no idea where to start. I obviously don’t know what was in the strange mind of Hooper, but “Lifeforce” is too derivative for me to believe that he approached them with the concept. The opening scene on the space ship feels very much like “Alien”. He also added a dash of “Star Wars” in its tone and I could swear that at one point, the music was borrowing a few cues from John Williams. Then “Lifeforce” enters “The Thing” territory, by playing with the ambiguity surrounding characters’ identities. But by the ending, we really learn that all along, this was a blatant rip-off of “Quatermass and the Pit”. Now let me be perfectly clear- I am cool with knock-offs and rip-offs and these movies in particular have spawned plenty of entertaining clones. But the narrative here is so disjointed, as if Tobe Hooper and his writers kept changing their minds as to what kind of story they wanted to rip off. At first, I was content with an “Alien” wannabe, as the sets were cool and creepy. But just as I would start to get into it, the setting, tone and sometimes even the genre should drastically change, forcing my brain to switch gears. This happened too rapidly and too often for me, so the narrative struggled with building momentum. On the flip side, I have to admit that I had absolutely no idea where the ‘story’ would go. “Lifeforce” might be borrowing A LOT from its contemporaries, but Hooper will shake things up by adding naked space vampires…you don’t see that every day…and it’s kind of unpredictable with what it will rip off next. When a movie starts off with space vampires, I don’t expect it to end with zombies overrunning London. So you can find the script appealing or alienating based on how you react so its bizarre mashup of borrowed ideas.

Another flaw or quirk with the narrative is its attempt to be an ensemble piece. It starts off following Carlsen and his crew, then shifts to Dr. Fallada (Frank Finley) and Dr. Bukovsky (Michael Gothard; whose character isn’t even properly resolved). Then Caine (Peter Firth), an SAS member, replaces Bukovsky. Then Carlsen returns and replaces Fallada, who I personally liked a lot more than Carlsen. There isn’t enough screen time for anyone to be fully fleshed out and I wasn’t sure who the main character was supposed to be. Perhaps I would’ve made an attachment to them if they spent more time together. The upside to this is that we’re not really sure who will live or who will die, but personally, I didn’t care either. I was mostly indifferent to them all. The tone is outright disorienting and is one of my main points of contention. “Lifeforce” starts off like an 80’s pop film, with a good looking cast, a naked vampire, and some disturbing violence with a dash of cheese. Then it shifts to a “stuffy old men talking” type of movie, suddenly taking itself a lot more seriously. Then it becomes a freaking zombie movie, embracing the absurd and THEN it becomes more supernatural based. The acting is uneven, which might be part of the problem, as some of the dialogue is hokey and the performances can reflect that. Railsback was the worst for me, as I could never take anything he said or did seriously, because of his tendency to ham things up. This made me snicker during scenes where I shouldn’t be snickering…Of course, other actors turn in stellar performances and they even sold me on some awkward dialogue. Yet for some, Railsback’ strange delivery turned “Lifeforce” into a camp favorite, even though I’m not sure that was the intention.

Ugh, jeez, there is so much I want to talk about, but feel I better wrap it up. Let’s see…..Well, the story seems to pull itself out of its own ass quite often. They’ll randomly throw in a revelation that Carlsen and the vampire share a telepathic link for exposition purposes, some character finds a way to kill the vampires in the silliest way possible, and even the ending feels random. “Lifeforce” has its moments and sports some great visuals. But Hooper’s vision seems to have been lost underneath heaps of bad writing, convoluted subplots and bad actors. He seems to have forgotten that films like “The Texas Chainsaw Massacre”, “Poltergeist” and even “Funhouse” worked because they were so simple, and simplicity tends to be the best route for horror films. Yet one persons’ garbage is another persons’ treasure and…I don’t think “Lifeforce” is garbage, even if I also don’t treasure it. It’s a bizarre, wildly uneven movie that’s so unhinged it’s bound to draw a passionate reaction out of you. You may view it as awesome, terrible, or a lot of both like myself, but I can’t imagine you experiencing indifference. Unfortunately for Hooper, “Lifeforce” bombed at the box office, along with his other two Cannon contracted features. These high profile failures derailed his career and he has yet to ever mount a real comeback, even though these films developed followings over the years and Hooper’s subsequent works have some merit to them- even if they are usually dumped straight to video (Or DVD). I don’t think he’s a bad director, but it’s unlikely he’ll ever be able to recapture the magic of “The Texas Chainsaw Massacre”  or”Poltergeist” again and it’s probably unfair of us to hold him to that standard.

Violence: There is some ghastly imagery.

Nudity: There is a fair amount of female flesh and some male nudity.