Plot: Kit (Jing Wu) is an undercover police officer who has been left to rot in Prison, where Chatchai (Tony Jaa) is working as a guard. Through a series of contrivances, Kit escapes and Chatchai faces the moral dilemma of choosing between helping Kit or being a dutiful employee for his corrupt boss (Zhang Jin)- who is the only one who can save Chatchai’s daughters’ life. Also known as “SPL 2: A Time for Consequences“, “SPL 2“, “Sha Po Lang 2” and “Kill Zone 2: A Time for Consequences“.

For the record, if you’re wondering about the alternate titles, “SPL (Sha Po Lang) ” apparently refers to Chinese astrology that ties in with the thematic material of the film, but doesn’t translate well into English. Naturally, the west went with the more generic title- “Kill Zone“.

“Kill Zone 2” is definitely the son of “Kill Zone“, even if it’s telling a new story with different characters, because these films share identical strengths and flaws. Both are ambitious to a fault, as they’re juggling too many story-lines that are sometimes a little difficult to follow. The first perspective comes from Chatchai (Tony Jaa), a prison guard in Thailand who is struggling to pay the medical bills for his ailing daughter- who needs a bone marrow transplant. Chan Chi-kit (Wu Jing) gets sent to his Prison, although the circumstances surrounding this are very shady. The Warden (Zhang Jin) strips him of his identity and informs him that he’ll spend the rest of his days there, ignoring Chi-kit’s insistence that he’s a cop. We flashback to the events surrounding Chi-kit’s arrest, learning that he’s undercover and his handler is his bad-ass Uncle (Simon Yam). His investigation leads to a crime syndicate leader named Hung Man-kong (Louis Koo), who is dying and plans on abducting and murdering his younger brother for his heart. The cops rescue him, but Chi-kit is stranded in enemy territory and the villains plan on using him to get Hungs’ brother back. It’s revealed early on that Chi-kit has agreed to serve as a donor for Chatchai’s daughter, but because he was undercover, communications became muddled and neither are aware of this connection. I was expecting this to be a story where Chatchai helps break Chi-kit out of prison, but instead the focus shifts to the aforementioned Uncle and his investigation into the disappearance of Chi-kit. There is so much going on and that’s not even going into the Wardens’ organ harvesting or Chi-kits’ cocaine addiction. I strongly recommend you avoid the dubbed version, as a large part of the problem with the narrative is rooted in translation. The characters are all speaking different languages, yet they’re all dubbed in English and still can’t understand each-other, so it’s pretty disorienting. But even beyond that, these story threads don’t start coming together until the third act in the movie, so I spent a lot of my viewing experience wondering why Tony Jaa even needed to be there. There are some strange transitions, such as when Chatchai is approaching his sleeping daughter, the editor abruptly cuts to a ferocious CGI wolf growling at the camera. The daughter wakes up and reveals she was dreaming about it, but why did we need to see it and couldn’t they have eased us into the dream sequence? Not long afterwards, they use the image of a sinking cell phone to shift the focus to Chi-kit. There is a call-back to this, but it’s a distracting transition. “Kill Zone 2” is definitely striving to be artsy, especially with its use of the (ironic) score and sometimes it works, other times it fumbles. But I don’t think the story itself is complicated as much as it’s just told in the most unnecessarily complicated way imaginable. Too many characters, too many subplots and not enough time to flesh any of them out…Yup, definitely a sequel to “Kill Zone“.

Yet despite my snarky tone, I don’t think “Kill Zone 2” failed with its multitude of stories. The writer takes a lot of risks and enters some very dark territory, allowing me to feel like a downer ending was certainly possible. The script defies our expectations quite often, so the arrogant critic in me was often surprised when certain characters perished prematurely, or other characters were spared despite being set up as obvious victims. Unpredictability will often conquer any other shortcoming, especially when you’re like me and are used to noticing all of the patterns of a narrative. I also found the overall tone to be very refreshing, because it balances cynicism and optimism perfectly. We are dealing with some very deplorable villains who do terrible things and every situation seems to be surrounded by a permeating sense of dread. Yet there are also many selfless acts of kindness amongst minor characters and there are a lot of heartwarming exchanges between our heroes, making it easy to care about them. The cast deserves a lot of credit for making this work, as their performances all come across as very sincere and both Wu Jing and Tony Jaa are surprisingly good. I’ve always seen Wu Jing as a pretty boy, but he looks convincingly rugged and the actor does a good job at gradually changing the character for the better. Tony Jaa really surprised me, as you can see his inner conflict and desperation etched onto his face in nearly every scene, while his interactions with his daughter are incredibly sweet. This is easily his best performance in regards to drama. So despite the problems with the narrative, it still managed to leave a positive impact on me. Yup, definitely a sequel to “Kill Zone“. 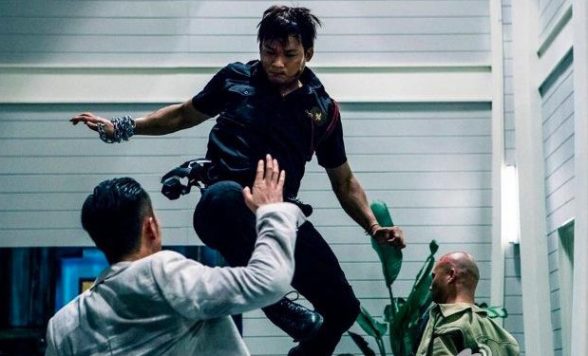 “Kill Zone 2” isn’t an action packed movie, although I’m not sure if I’d say most of the fight scenes were stored during the second half, as the pacing was too erratic for me to keep track of their placement. Sometimes the pacing would be lightning fast, with a segment being largely comprised of action, only to spend the next 30 minutes focusing entirely on drama. There are some incredible set pieces though, such as the prison riot, the warehouse siege and the finale, each balancing crazy stuntwork, sophisticated cinematography and phenomenal martial arts choreography. Tony Jaa continues to use Muy Thai, but you can tell this is a Chinese production, as their choreography is paced and stylized in such a distinct way. While I enjoyed Jaa’s work in Thailand, I do think it reached a point where we became used to his style, which might’ve contributed to the martial arts industry losing interest in him in favor of Donnie Yen and maybe Iko Uwais (“The Raid“). I’m not saying Chinese kung fu is the most effective form of combat (I don’t think any are; for the record) and any country can produce an awesome fight scene as long as the right talents are involved. But China has consistently been the top dog in this area, as their martial arts have been rooted in showmanship and theater for centuries. Every time their formulas for cinematic combat start to become stale, they incorporate new gimmicks, styles and techniques to elevate the excitement. So Tony Jaa’s presence gives the fighting a distinct flavor, while the choreographer designed new and awesome ways to use Jaa’s moveset. I’m also a big fan of Zhang Jin, whose movements are alarmingly fast and precise that I could buy him being able to face both Jaa and Wu Jing at the same time. Wu Jing is easy to overlook, but his fights with Jaa- whether as friend or foe- stand out because their styles compliment each-other, while looking so different. There isn’t really enough martial arts to satisfy the cravings of fans, while there is too much martial arts for those interested in the plot, but the quality of said martial arts is certainly top-of-the-line. Yup, definitely a sequel to “Kill Zone“. But is it better than “Kill Zone“? I think this is inferior when it comes to story and character writing, but superior when it comes to action, so it depends on what you want from it. Personally, I liked them both about the same and I hope this boosts Tony Jaa’s career the same way the first did Donnie Yens’.

Violence: Rated R and it can get pretty damn violent.