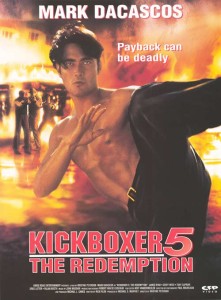 Plot: Mr. Negaal (James Ryan) is starting up a new federation that’s exclusively for Kickboxing champions, which will take the industry by storm. But he’s a psychotic asshol,e so most rational fighters turn him down. He responds by killing them (including David Sloan), but one of his victims happened to be the friend of Matt Reeves (Mark Dacascos), a skilled fighter who swears vengeance. Reeves teams up with a former hitman (Geoff Meed) to bring down this bloodthirsty tycoon once and for all.

“Kickboxer 5” opens with a round house kick to the face of its fanbase, by having the protagonist of the previous three movies get killed off unceremoniously. But it’s not finished with us yet. “Kickboxer 5” curls it’s hand and stiffens its fingers, sending a tiger palm strike right to the jugular with the revelation that Sloan was murdered by incompetent thugs who can best be described as ‘comic relief’. It’s the equivalent of “Rocky 4” opening with its titular character (but different actor) being slain by Rob Schneider. Kurt (Van Damme) suffered a similar fate, but at least his death effected the plot of “Kickboxer 2” and his previous Nemesis was the murderer. Here, Sloan’s death is just treated as a weak way to connect this entry to the other films. I have to wonder if the producers were angry with the actor or something, because something about his demise felt spiteful. “Kickboxer 4” was my favorite of the sequels BECAUSE David Sloan was finally becoming interesting. But the filmmakers cannot just beat us fans. They have to break us too. “Kickboxer 5” proceeds to spit on our unconscious forms with its overall poor quality. It says something when the highlight of your film is Mark Dacascos calling the villain a ‘butt face’.

I have to admit that part of me wants to be somewhat forgiving towards “Kickboxer 5″ for at least being an awful action movie, instead of an awful character drama (like “Kickboxer 2“). But here’s the thing. While “Kickboxer 2” may have failed in the areas that mattered, at least it wasn’t a disaster in every aspect of film-making. “Kickboxer 5” fails on ALL levels. Whereas the previously films at least cast the illusion that they weren’t Z-grade in the production value department, everything about this sequel looks shoddy. It may have been made in the mid 90’s, but I would’ve guessed it was produced in the 70’s, if I didn’t know better. The film stock looks that bad. Despite taking place in South Africa, there are only a handful of scenes that take advantage of the location. 75% of the time spent there could’ve taken place anywhere else in the world. Kristine Peterson’s (she also ruined the “Critters” franchise) direction can best be described as lifeless. There’s never any sense of excitement or intensity in any frame. The limp direction compliments the uninspired choreography nicely though, which means it makes boring fights seem…just as boring as they really are. I think a lot of the problem is that she didn’t use enough close-ups. She favors medium and wide shots, even when “Kickboxer 5” is attempting to be dramatic. One scene has Dacascos angsting pretty hard, running through the streets and hitting stuff. She films the entire scene objectively, keeping a camera at a distance. The problem is that these moments need to be subjective. They must put us in those characters shoes, so we feel what they are feeling, which close-ups are able to do. When you shoot the scene at a distance, it makes us feel like a passerby. Let me ask you this: If you’re walking down the street and see some dude hitting the walls/punching the air, do you stop and feel bad for him? No, you feel uncomfortable for having to witness this. Instead of being an emotional moment, it’s really just awkward. The entire movie is like that.

Despite the characters claiming that they are using Kickboxing, I don’t believe anyone was actually a kickboxer. Negaal (Ryan) and Croft (Meed) appear to be Karate experts, while Reeves (Dacascos) seems to be using Kung Fu. They have some good techniques, but their opponents tend to be average thugs, so the majority of the fights are just baddies getting knocked down. I found these brawls to be rather slow paced and dull. My main problem with the martial arts present is that it often doesn’t look authentic. I gave Albert Pyun a lot of crap for being a poor action director, but at least the fighters appeared to be legit. They used some slick, believable and diverse techniques. Here, there’s a lot of fancy movements, but they’re very impractical and wasteful. This is especially apparent with Dacascos’s battles, as I kept face palming every time he did something ridiculously stupid and the villains failed to capitalize on it. Example, at one point he jumps in the air and thrusts BOTH feet forward to kick the villain. It looks kind of cool, but what is the advantage of doing that? If anything, his front/jump kick would be less powerful and more risky than a normal kick! My favorite bit has to be when he starts cartwheeling away from the villain (he does it earlier on too) and the villain follows him with cartwheels of his own. It just looked silly. I will say this though: I suspect Dacascos knew how absurd these techniques were, but he wanted to spice up the film somehow. He was one of the choreographers and he probably figured that he was in a stinker, so at least would show off his agility. Props for trying, dude! The choreography is minimal, mostly just flailing and knocking people down, so don’t expect much there. True to form, the director puts the camera in the worst places, so you can clearly see that no one is actually getting hit. When Dacascos uses a spin kick to bring two thugs down, it’s obvious that the blow didn’t connect. Some of the minor fighters- especially that German ‘champion- keep dropping their hands so that they will be conveniently hit without obstruction. “Kickboxer 5” isn’t short on action, but it’s so unexciting and phony that it might as well have had no action at all. At least then the movie could have an excuse as to why it’s boring.

It has been a long standing tradition of the “Kickboxer” franchise to hire actors with little acting capabilities. “Kickboxer 5” is somewhat different in that a lot of these ‘actors’ might be okay, but the dialogue and direction they’re given makes them the most obnoxious supporting cast of all the “Kickboxer” films. Every mannerism is oversold, primarily because everyone is trying way too hard to be ‘funny’. Peterson doesn’t handle the comedy any better than she does the martial arts, so I never laughed. At least the primary characters do the best, my favorite being James Ryan (Negaal). The man had charisma, charm and was credible in his action scenes. But he also had the most compelling character. Instead of being a corrupt businessman, he is a psychopath who has an unhealthy obsession with the martial arts. I found myself wishing he had more screen-time. Mark Dacascos (Reeves) tries his best, but the character is too flat to be interesting. Kurt and David had flaws, but Reeves is a fairly basic hero. They reveal early on that he turned his back on professional fighting and chose to teach kids, but that would only be relevant if the villains attempted to force him into fighting again. They don’t, so that set-up is both unnecessary and derived from “Kickboxer 2“. At least in that film, David’s refusing to fight was both something that could be admired and criticized. Here, it’s just used to present Reeves as a saint. Kurt and David had distinct personalities, but Reeves doesn’t. He’s just a good fighter who wants revenge. That’s the extent of his characterization. No conflict or anything resembling character development. His co-hero, Croft (Geoff Meed), has a better arc, but I felt it was under-explored. What caused him to renounce his life of violence? What brought him to that world in the first place? The writer had no interest in exploring that. Speaking of which… 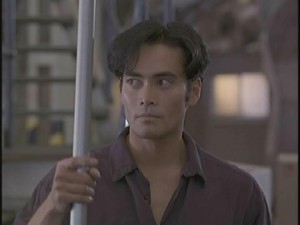 In all movies- especially bad ones- the screenplay is usually the weakest link. Generally, we’re lucky if the script is just average and then maybe the director will be able to make it exciting. But “Kickboxer 5” has sucked on so many levels, so is it a surprise that the script is actually WORSE than the direction. I’ve alluded to its weaknesses in previous paragraphs, from the lame jokes to the poor character development. The rest of the dialogue is thinly veiled exposition and sometimes the context is so forced that I actually had a good laugh at it. There are a lot of plot holes, like how the cops say they can’t do anything against Negaal without evidence. Um, wasn’t Reeves THERE when his friend was killed? Did they not find the body of one of the villains who was dumped in the trash? Doesn’t anyone find it odd that everyone who Negaal contacts either signs up with him or dies? One fighter even confesses that Negaal’s reputation is common knowledge, but he figures that out before the law? THINK, WRITER! Whenever the characters hit a snag in the story, bullshit writing will save the day. Okay, so Croft sends a letter to his sister, apparently telling her to pick them up. But based on how that scene is done, there is no way she should know where exactly to go. He wrote it BEFORE they were told of the escape plan. I suppose it could just be a coincidence. Maybe the plan was once they were out, there were to go to the place they told her to wait at and it just so happened that the drop-off point was nearby. But that’s just as-if not more- stupid! Argh! Writer, at least try to write a coherent script! These mistakes are inexcusable!

I thought “Kickboxer 2” was a cheap way to exploit the fans of “Kickboxer“, but now I’m becoming more sympathetic towards it. At least that movie tried. It pleased enough people that it acquired two (better) followups. “Kickboxer 5” is a film devoid of effort or skill, but apparently this backfired as there hasn’t been any sequels since then. It’s kind of a shame, as I do like Mark Dacascos and think he could’ve made a good lead. Sadly, the script, direction and choreography failed him. It’s just a bad, bad movie that makes its predecessors seem like respectable pieces of art. I just don’t see how anyone can like this. The best thing I can say about it is it could’ve been worse. It could’ve had modern day Steven Seagal in the leading role. It could’ve had shaky camerawork and incomprehensible editing. But this just keeps it from being “Against the Dark” bad and I’m pretty sure if this was made today, the director would utilize those obnoxious conventions too. But it wasn’t made in this decade, it is a 1990’s bad actioner, so those flaws had yet to take hold of the genre. Back then, we just had to endure slow paced action and cheesy dialogue, which is SLIGHTLY better than what is at the bottom of the barrel now. “Redemption: Kickboxer 5” was not the redemption of this series, it was its damnation. It is currently in hell with “American Ninja“, “Best of the Best” and “Bloodfist” franchises. May God have mercy on its soul.

Overall: “Kickboxer 5” is the worst of the “Kickboxer” movies and just thinking about that makes me shudder.