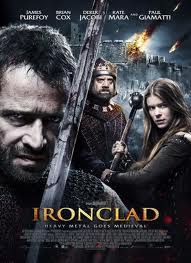 Plot: In the early 1200’s, King John (Paul Giamatti) was such a tyrant that the Barons and Knights Templar banded together and rebelled, ultimately forcing the King to sign a treaty that limited his power. Shortly after, John recruits Danish mercenaries and starts slaughtering the Barons who humiliated him. A former Templar named Marshall (James Purefoy) witnesses his cruelty and decides to join the people who originally opposed John. Marshall and the Baron William d’Aubigny (Brian Cox) recruit a handful of trusty men in order to secure Rochester Castle, a location that has plenty of strategic value and can turn the tide of the war. They lay claim to the stronghold, but King John’s warriors now have them surrounded and they’re in a fight for their lives. Can 20 soldiers hold off 1,000 warriors?

“Ironclad” impressed me for a handful of reasons. By all accounts, it should be terrible. It had a troubled production, was dumped on DVD in the U.S and it had a meager $25,000,000 budget despite being an epic, medieval feature. Yet somehow the director managed to snag a respectable cast, cobble together a stellar- if flawed- script and perhaps delivered one of the best looking period pieces in the past few years. How in the hell does “Robin Hood (2010)” look so bland with a budget of $100,000,000, yet “Ironclad” looks four times as lavish despite having a quarter of the funds? That’s not to say the movie is for everybody or that even if it is your cup of tea, that it’s a good film. But I was impressed and often entertained, so I can forgive its shortcomings.

The first half of the movie showcases lots of testosterone, interesting badass characters played by strong actors. Are they stereotyped? Sure, but there are enough tweaks to the characterizations to make up for this. Marshall is your cliched murderer who wishes to redeem himself, but unlike other heroes who traveled down that path, you can actually see the murderous side of Marshall. He was obviously a vicious killer who’s guilty of many war crimes and you can see how that past is effecting his current actions. Their leader, Baron d’Abigny, is your typical good natured, loveable Father figure. But he’s played by Brian Cox and it’s always nice to see Cox play a good guy for a change. But my favorite performance came from Paul Giamatti, because his interpretation of King John (formerly known as Prince) is much more interesting than what we usually get from this character. Generally, Prince/King John is weak, soft and bitchy. While this version has shades of those traits, they play up his ruthlessness and his intelligence a lot more. Plus, unlike the 2010 Robin Hood movie, you can take him seriously as a villain. He even has touches of humanity and Giamatti captures all of this wonderfully. The cast also includes Kate Mara (Isabel), Derek Jacobi (Cornhill), Charles Dance (the Archbishop), and Jason Flemyng (Becket) among other familiar faces. It’s awesome to see all of these people interact.

Oh yeah, did I mention that the first half features almost non-stop action? You get plenty of hack and slash clashes and the choreography is surprisingly good considering these guys are using heavy weaponry. Even better, the camerawork never gets in the way of the action either, although good luck trying to tell who is who. Actually, I suppose this leads into a complaint. The format is lifted from “Seven Samurai“/”The Magnificent Seven“, but unlike those two, the majority of the defenders aren’t fleshed out very much and you might get some of them confused with others. But I spent the opening 60 minutes paying attention to the sheer spectacle. There’s so much freaking gore and the carnage is creatively over-the-top. You don’t just see decapitations, impalings, etc. You see people being dismembered, chopped down the middle and WORSE! “Ironclad” certainly doesn’t shy away from the violence and that made me happy. When the characters aren’t slaying people, we can breath in the gorgeous landscapes, sets and costumes. The director makes excellent use of the foreground and background, making sure everything is framed impeccably. The actors are always in the right position and it’s refreshing to see a bit of color in these settings. It’s sometimes dark and bleak, but there’s also a lot of green and sometimes the color scheme becomes sort of trippy (white water?). The matte paintings- at least I presume a lot of these shots had to be painted on- are aesthetically appealing even when they’re not convincing. I’ll laugh heartily if it turns out that no matte paintings were used yet I still thought some of the backgrounds looked artificial. “Ironclad” is not as visually attractive as “Lord of the Rings” or “Excalibur“, but they were A-list productions while this had a C-list budget. That is amazing.

Sadly, the film runs out of steam around half way through. It’s at this point you’ll notice how weak some of the characterizations are and we’re forced to endure a flimsy love story. Romances are hard to pull off because to truly understand why people are attracted to each other, you must know what is going on in their head. This means that the filmmakers either will rely on clunky exposition or the actors mannerisms. When relying on acting, they will either be so subtle to where you might not notice significant glances or it will be like “Twilight” where it starts to become unintentionally hilarious due to the high levels of hamminess. I guess I have to accept that audiences demand this shit and directors have yet to truly master a formula. But when your movie takes place in the middle ages, where adultery could get you killed or allegedly put your soul in peril (the Church exploited this a lot), it becomes more farfetched that a pious man of God and a married woman would risk having an affair, especially when it’s under the husbands own roof. The attempts at subtext are goofy though. I don’t know what’s worse, a shallow romance or a directors attempt to make it artistic with phallic symbolism. When she’s touching Marshall’s “sword”, I started to laugh. Talk about heavy handed. With that said, I should be used to this kind of crap by now, so I’m not sure why I have to make an example of “Ironclad“, as it’s not the worst example of a tacked on love story. Yet it does stop the movie dead in its tracks.

The film does make up for it with a bombastic finale, but the damage was done. The pacing was so clunky that I was no longer fully invested in it. Yet epics have this strange tendency to be very faulty and I don’t see why “Ironclad” would be any worse than cult classics like “Excalibur“. I mean, that movie was far more sloppy when it came to script structure, but fans either overlook or forgive its failures (and I am one of them). So why should I be any harder on “Ironclad“? This movie proves that with inspiration, talent and ambition, you can take a little bit of money and create a sweeping, thunderous epic that will make you want to draw a sword and kick some ass. The flaws be damned! “Ironclad” is spectacle at its finest!

Nudity: Some, although the sex scenes don’t occur on-screen.

Overall: If you like medieval actioners, give “Ironclad” a look as long as you’re willing to accept that it isn’t perfect.