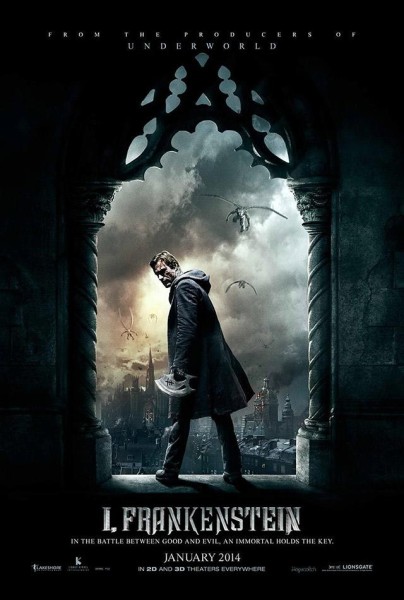 Plot: Frankenstein’s Monster (Aaron Eckhart) just wants to be left alone in peace, but he’s dragged into a war between demons and angelic gargoyles, so has to choose a side and kick everyones ass in the process.

“I, Frankenstein” didn’t strike me as especially awful while I was watching it. Sure, I can’t say I was really enjoying myself and the only time my attention would really activate was when something would annoy me. But I would’ve used the term ‘mediocre’ before calling it ‘bad’. Yet as I began penning my thoughts, the more and more I realized that “I, Frankenstein” really does suck, even if it’s not as blatant as “47 Ronin” or “The Legend of Hercules” were. But why? Or more importantly, why did I almost overlook the extent of its suckitude? I sincerely do believe that my standards were dragged down into the abyss of hell thanks to the awful cinematic output I’ve witnessed lately. Sure, “I, Frankenstein” sports some pretty weak effects, but at least they looked more polished than what “The Legend of Hercules” delivered. Sure, “I, Frankenstein” is in a hurry to get itself over with by rushing the narrative, but at least it wasn’t as unfocused as “47 Ronin“. Yet that doesn’t mean “I, Frankenstein” deserves any praise. It just means it doesn’t deserve the same level of damnation that those other two flicks got. “I, Frankenstein” is guilty of the usual critical follies, whether it be stupid dialogue, weak acting, a flimsy plot, awkward pacing or unreliable special effects. But its greatest sin is that even though it contains a non-stop onslaught of action and visual effects, it’s just not very fun. Yet it’s not unwatchable either.

“I, Frankenstein” is so colorless and grim, but it’s not deep or atmospheric. I suspect the filmmakers wanted to emphasize the ‘Rule of Cool’- with characters making awesome poses in front of epic backgrounds-, not unlike what the “Underworld” franchise achieved to some degree, but nothing about “I, Frankenstein” stood out as cool. This movie is more proof that ‘fast paced’ does not always equal entertaining. At first, I was enjoying myself to some degree as the action scenes do boast some decent choreography, but eventually I started to feel burned out. The fight scenes always look the same, the special effects always look the same, the locations always look the same. It gets old. I need diversity, damn it! The fact that the special effects are very inconsistent doesn’t help things much either. Sometimes the CGI is convincing and other times the CGI looks too much like CGI. When practical makeup effects are used, such as with the demons, I often thought they looked like the coolest Halloween masks ever. Whoops! I’m pretty sure that wasn’t what the filmmakers were going for…Although at times they could be pretty menacing. Still, apparently the critics thought the special effects looked A LOT worse than I did. I just thought the CGI was standard, neither being especially impressive or embarrassing. Yet when your movie is really relying on these effects, that is just not enough. 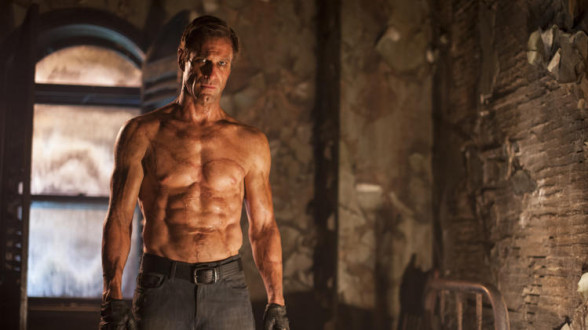 I am no stranger to the brainless action brand of film and sometimes, I can even enjoy them, but they need to be designed with that in mind. “I, Frankenstein” almost seems to not want to be that kind of movie. There are enough implications of characters having personalities and developing throughout the course of the story, but then the action hijacks any potential that could’ve been found there. If this was conceived as a brainless action flick, the character of Frankenstein’s monster (called Adam) would be a boring invincible hero who exudes sheer badassery. Except here, he’s not. He loses fights quite often and seems to always need to be rescued. Whenever he’s overpowered or imprisoned, he starts whining and begging his captors to free him. He’s not trying to trick anyone either. Obviously “I, Frankenstein” wants to make him a very human character who showcases a variety of emotions, while being vulnerable despite his abilities. But since the movie usually spends time on making him a prop who’s only around to deliver a continuous stream of action sequences, what little ‘character’ we get just makes him look like a sore loser who only acts badass when he’s on top of things. Whoops. Poor Aaron Eckhart. He’s a good actor, but he often just seemed confused as to how to play the character. The movie is in so much of a hurry that even the token romance forgets to be…well, a romance. Frankenstein’s Monster isn’t the only victim of being run over by sheer spectacle either. The Gargoyles are supposed to be morally ambiguous, but their erratic decisions and downright stupid judgments just didn’t fit with their characterizations. Instead of feeling natural, they would only do something a certain way in order to drive the story, even if it makes little to no sense. What’s worse is that the action isn’t ALWAYS to blame either. There are two characters who have a fair amount of screen-time early on, only to die BEFORE THE FIRST ACT EVEN FINISHES. Their deaths don’t seem to effect Adam much and that time could’ve been spent on Leonore (Miranda Otto), Terra (Yvonne Strahovski) or ESPECIALLY Gilliam (Jai Courtney). I couldn’t even tell whether I was supposed to like the last guy or not. He’s shown to have good intentions and has a courageous side, but he’s a total prick when dealing with Adam and that never changes. Once again, I presume the original intent was for him to be an actual multi-layered character, but he’s also reduced to a prop whose only purpose is to deliver action sequences.

But we’re not done yet, what does the rushed narrative do the story? It often seems thinner than it really is (believe it or not, quite a bit is going on), but it also leaves some holes. There is a plot twist near the ending which makes absolutely no sense that answers the question of whether Adam has a soul or not. The final answer contradicts an earlier scene, although I presume the original intent was for this ‘twist’ to be reminiscent of “Constantine“, where God is involved. “Constantine“, which in a way was this movie done right even though it wasn’t that great either, actually built up that idea so it made sense when it finally went down. God is never really involved in this story, outside of a few mentions of how ‘God is no longer the only creator of man’, so…it’s just duex ex machina bullshit. Whoops! Also, whenever the demons or gargoyles attack in masses…where do all the humans go? They are fighting in a city, yet the locations are all devoid of civilians. Whoops! Once again, if “I, Frankenstein” wasn’t in such a hurry and didn’t just focus on railroading the audience with action scene after action scene, these holes could’ve easily been filled. Ugh, this movie is so stupid.

Yet “I, Frankenstein” didn’t aggravate me while I was watching it. I had no problem with leaving my brain outside the theater while my eyes feasted in the visuals. The problem, of course, was that my eyes ended up feeling unsatisfied and “I, Frankenstein” only works if you never plan on retrieving your brain after viewing it. Because once you start thinking about it, the stupidity gang rapes you from every direction. But I can deal with stupid and have enjoyed dumber movies. Everything I complained about during my review could’ve been forgiven if “I, Frankenstein” had an anchor for me to latch onto. If there was a trace of inspiration within the story or the characters. If it was paced much more evenly, knowing when to slow down so it didn’t wear itself out so quickly. If the action scenes weren’t so monotonous. If the special effects were more creative with the designs and were more consistently believable. If the dialogue wasn’t so silly and the actors didn’t look so lost. If there was anything I could really embrace, I probably would’ve given “I, Frankenstein” a passable grade in spite of everything else. It’s not really abysmal in any way, it’s just not exceptional in any way even though it had a lot of potential- making its failures that much more disappointing. Much like “Priest“, when I think of “I, Frankenstein“, I shall think of its missed opportunities and what it could’ve been instead of the films objective quality.

Overall: “I, Frankenstein” isn’t good enough to be fun, but it’s not bad enough to make fun of. I wouldn’t bother watching it during the theatrical run. If you’re interested in seeing it, wait until it is a rental.