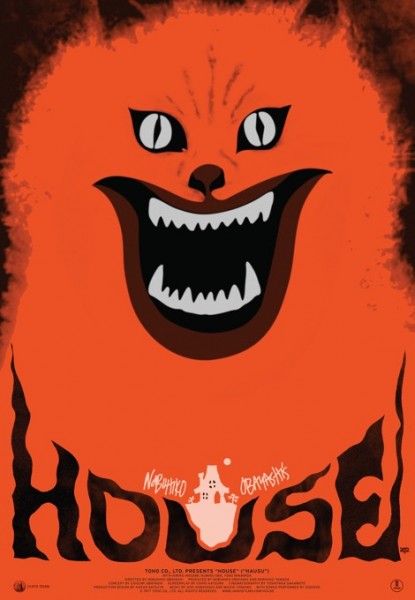 Plot: A group of schoolgirls stay at an old, isolated house- where they are preyed upon by a malevolent entity…and I think LSD is involved…somehow…Also known as “Hausu“.

So I put “Hausu” into my DVD player and began to watch it, only for my viewing experience to be derailed when I apparently unintentionally ingested acid. After my trip died down, I tried watching “Hausu” again only for the same thing to happen. At this point, I began to suspect that maybe “Hausu” is just that damn weird.  We have a surrealistic horror-comedy that is often described as “X meets Y, mixed in with LSD“, with X usually being “The Evil Dead” and Y being interchangeable with something strange…and don’t forget the drugs. My Y would be Chang Cheh’s “Heaven and Hell“, but no one knows about that one so I must go sulk in a corner. “Hausu” is a fascinating experience because it’s one psychedelic visual following another, some shots being alluring while others are haunting. It’s corny, campy and kind of creepy, but you have to accept its avant-garde approach in order to appreciate it. Not everyone will have a positive reaction, so be sure to consider my points carefully before choosing whether or not this cinematic incarnation of acid is for you.

I was taken aback by how corny the film was, especially at first. The performances from the actresses were strange and over-the-top and their character dynamics were…unusual. I thought the interactions between the girls had a heavy lesbian subtext and even Gorgeous’s (Kimiko Ikegami) relationship with her Father seemed vaguely incestual…Remember these words, for I shall return to this point later on. But in terms of the tone, the characters barely resemble real people and the various cartoonish backdrops, goofy songs and hammy acting styles will make you wonder if you confused this alleged horror classic with a childrens program that happens to have the same name. Western audiences will particularly struggle with this as the comedic aspect is much broader than what they are used too, which is ironic as “Hausu” was better received in the west than it was in Japan. Yet underneath all this… bubblegum flavored shell lies something sinister, which contrasts with everything else within the movie and yet compliments it. “Hausu” never loses its camp value, but there is an unsettling atmosphere thanks to its morbid ways of killing people. I’d actually like the modern day, Paranormal themed trend of horror flicks if they contained scenes of victims getting eaten by pianos. That sounds silly, right? And it most certainly is. But it’s also pretty disturbing because most of the kills are prolonged and make use of ‘stomach’ acid. You see, the house is literally feeding on these ladies and won’t let you forget it. The girls might be playing stereotypes…even their nicknames are based around their single defining attributes…but there is something so lively and innocent about them. This makes it hard to witness their fates. 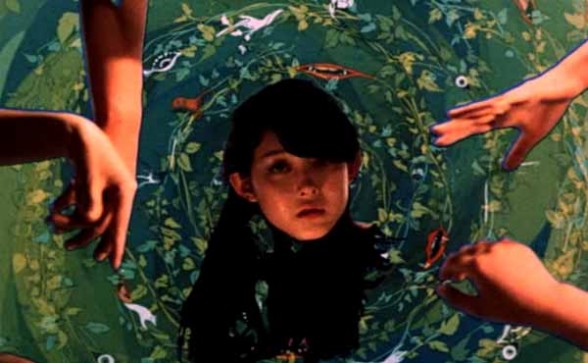 There isn’t a single mundane visual in the entire movie. There will be one trippy shot, followed by another trippy shot and often the transition between said shots will be trippy as well. The director takes an avant-garde approach, using animation, mattes- even breaking the fourth wall, set design and an abstract use of color in order to tell his story. To call “Hausu” a ‘stylish’ film is an understatement. The sound is just as unusual, with exaggerated noises and a repetitive soundtrack that is both catchy and annoying. Whether the sound design and score work for you or not, you’ll probably remember them. For absolutely no reason, they play the theme at one point using only looping cat meows. A lot of the imagery is freaky, like when the piano closes itself on severed fingers, causing an explosion of blood. Or what about that iconic picture of the cat, where its facial expression becomes significantly more sinister every shot. I don’t want to spoil anything else, but that is merely the tip of the ice berg. “Hausu” boasts a lot of creativity with its visuals, regardless of whether it’s falling under ‘horror’ or ‘comedy’. You never know to expect and just when you thought that you’ve reached the peek of its madness, it will only get crazier and crazier.

But I will admit that my initial thought was ‘style over substance’…until I learned that the director took inspiration from the musings of his 10 year old daughter and that the point of “Hausu” was how it was told from the eyes of a child…and suddenly I felt like a total pervert. Even though the characters are played by young women, their mannerisms actually make a lot more sense from that perspective. That lesbian and incest subtext I saw? Much more innocent in retrospect, as kids tend to act like that. The cartoonish imagery, the fear of being eaten and the nonsensical craziness of some of the attacks…of course these ideas are coming from the imagination of a child! Now quirks like the Step Mother always moving in slow motion, while her hair often seems to blow from wind that isn’t even there make more sense when you consider that this is from the POV of Gorgeous, who’s jealous. This puts “Hausu” in a whole new context, as you can argue that it’s a ‘coming of age’ story. Every character represents something important to the female identity, which is both their strength and weakness. Even the fact that these girls are played by adult women makes sense, as what age group always insists that they are ‘not a child’? I found it amusing how the girls keep hoping that the man will come and save them, with one even imagining him as a Knight in Shining Armor, as young girls would certainly do. Only for it to cut to him being stuck in traffic and wasting time eating noodles: Clearly the emphasis being on how fantasy and reality are conflicting forces. They ultimately take this farther using some hilarious phallic symbolism. By the end of the movie, the POV has shifted from ‘Save me my Knight in Shining Armor” to ‘Men are useless’ and the girls must rely on their own abilities. I did think the film went a bit too far in its zaniness at times and the last scene was…off…It’s as if the movie regressed back to its childlike optimism after a rather grim conclusion…Weird. But “Hausu” is crazy and I love it for its wildness, but you have to really consider whether this is the kind of movie for you.

Nudity: There is some.

Overall: “Hausu” is wonderfully weird. I loved it, but you might not.