(Written and Directed by Kazuki Ohmori) 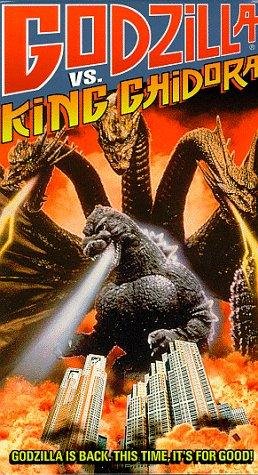 Plot: Time travelers from the future show up in modern day (1990’s) Japan, offering them salvation. Apparently Godzilla is about to wipe the country out, but they have a plan that will eradicate Godzilla from existence. It seemingly works, but now Godzilla has been replaced by another monster known as King Ghidorah. Therefore, the Government has to resurrect Godzilla in order to stop this new menace.

I’ve always found it a little sad that “Godzilla Vs Biollante” never found the acclaim it deserved. It was considered a financial disappointment upon its initial release and even now, you don’t often hear about it. I personally thought it was one of the best entries of the franchise, possibly even the best of the Heisei era. Toho blamed its failure on the new monster, so decided to bring back a familiar face to oppose Godzilla for the upcoming sequel…KING KONG! Unfortunately, Turner Entertainment demanded too much money and the idea was scrapped. So instead, they settled on Godzilla’s most popular foe, King Ghidorah. In previous reviews, I’ve made a point to remind readers that I grew up with the franchise and the films which I tend to dislike these days were the ones that I had little exposure too as a kid. Because I wasn’t able to watch “Destroy All Monsters” or “Godzilla Vs Gigan” much (maybe once or twice) as a boy, I can’t say I enjoyed them as an adult. I only viewed “Godzilla Vs King Ghidorah” once during my fanboy years, but I tended to shy away from it after that. Usually when this happens between me and a Godzilla flick, it’s due to a lack of opportunity, not a lack of interest. In this case though, it was because I wasn’t impressed with the movie. Yet years later, I would continuously hear good things about the film, so I decided to pursue it once more. “Godzilla Vs King Ghidorah”…sucks. Whenever it manages to entertain, it’s usually for the wrong reasons. I have no idea why my fellow Godzilla fans enjoy this so much, because it fails on almost every level.

Let’s discuss this HILARIOUS story. There are two complaints which seem to follow “Godzilla Vs King Ghidorah”, whether spoken by a fan or detractor. The first is the apparent anti-American sentiments. I personally disagree with that accusation, as the movie is quick to criticize Japan too and the American soldiers aren’t portrayed in a negative light (most of them don’t even want to be on the island). As an American, I was more offended by the insanely awful dubbing than I was in regards to any of the content. The second complaint is the whole time travel paradox. Time travel is a tricky thing to pull off, but how its used in “Godzilla Vs King Ghidorah” makes absolutely no sense. But I will admit that I’m grateful because it provided a lot of laughs. They get rid of Godzilla, but now have to contend with Ghidorah. So they bring Godzilla back, only to empower the monster, so Ghidorah is destroyed. But now Godzilla is trashing Japan ever harder than before, so they have to bring back Ghidorah to deal with the menace that they created. It’s a pretty funny dilemma. On the positive side, “Godzilla Vs King Ghidorah” is remembered for being the first Godzilla flick to explore his origins. That was pretty interesting. But I also can’t help but wonder why they just go back in time and stop the creation of Ghidorah when they moved Godzilla. Then move Godzilla somewhere else, so he’s not resurrected. The writer obviously didn’t think his own story through. 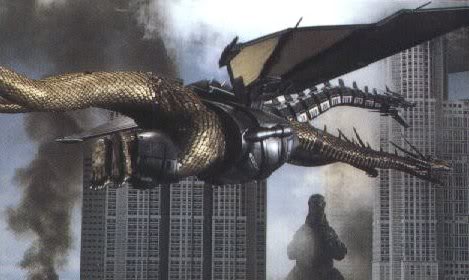 As for the characters, everyone is pretty boring, although the dub can be pretty amusing. This is the only entry within the franchise where Miki (Megumi Odaka) failed to capture my interest. What did catch my interest was the awful dialogue, although this is more of a jab at the dub. I have no idea how faithful the English language translation was to the original Japanese version, but every line seems incredibly redundant. “Godzilla Vs King Ghidorah” has this habit of someone making a statement and then whoever they are talking too will say the same thing. Characters will respond to “You call it a time machine…” with “So that is a time machine” or “I think the dinosaur became Godzilla” with “So you’re saying the dinosaur became Godzilla?”. Yes! That’s what he just f@cking said! The dialogue in general has the tendency to explain what we already know, but the American interactions stand out as the most awkward. The awfulness of the line “Take that, dinosaur!” is out-shined by the awfulness of the delivery of that line. The attempts to be dramatic USUALLY fail, primarily because the cast is so large that no one is able to be fleshed out. I especially love the revelation regarding Anna Nakagawa’s character and the protagonist near the end, which becomes creepy when you remember that it seemed like the movie was building up a romance between them…Yeah…Luckily, the music does sometimes overcome the badness. The scene where Godzilla confronts the soldier from his past is overblown, but the music makes their ‘reunion’ rather moving…

The monster designs definitely deserve praise though. Godzilla looks significantly crazier than in previous appearances. The animatronics are fantastic, making him appear incredibly pissed off and menacing. He’s not as scary as he was in “Godzilla 1985”, but his aggressiveness makes up for it. Godzillasaurus was excellently rendered, even if the effects surrounding him were subpar at best. I’m split on King Ghidorah. The design in itself works, but its movements are stiff and awkward compared to the Showa version. When I reviewed “Godzilla Vs Mechagodzilla II”, I pointed out that the advancements in the monster suits came at a heavy price- their mobility. It’s obvious that outside of firing lightning bolts, there wasn’t much they could do with King Ghidorah and when they try, it just looks weird. Even though Ghidorah is definitely one of the more iconic Godzilla enemies, I’ve always found him to be an overrated villain. He’s always being controlled, although this was the first time he was somewhat sympathetic. He lacks the personalities of other monsters like Gigan or Spacegodzilla. He’s also significantly weaker when compared to his Showa counterpart, undermining the threat he poses. The Doratss are laughably bad effects, resembling dolls more than monsters. Despite this, I have to admit to finding them cute. Finally, we have Mecha King Ghidorah, who is…awesome. Although once again, there wasn’t much the filmmakers could do with him (or should I say it?). 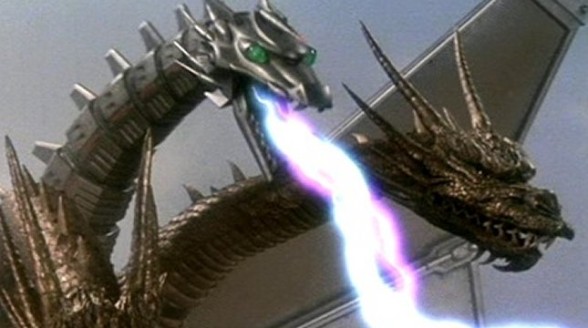 But while the monsters themselves are more successful than not, the remainder of the special effects are more bad than good. The director had previously helmed “Godzilla Vs Biollante”, which showcased superb special effects, so maybe the budget was slashed and he had difficulty working around that. Everything about “Godzilla Vs King Ghidorah” looked off to me. The green screen effects always looked like green screen effects, especially whenever Godzilla or Ghidorah would interact with humanity. The miniatures always looked like miniatures, undermining the scenes involving mass destruction. When some jets attack King Ghidorah, the use of real jets only drew more attention to how fake the model jets were in comparison. This problem wasn’t apparent in the next entry, “Godzilla Vs Mechagodzilla II”, which I only watched a month ago. Yet I rarely hear anyone call this one out for its failures in the special effects department. But it doesn’t even stop there. The time traveling sequence is full of poorly rendered effects. If it wasn’t the android’s goofy running, it was stuntmen (or technicians) missing their cue and flying in the air before the explosion goes off. Seriously, I thought the Showa era produced better visuals…and that was the era of “Godzilla’s Revenge”…

The finale is considered a high point among the franchise, but I was mostly underwhelmed. Sure, the action was acceptable, even if the director continuously is sabotaging his own work by speeding up the camera. It’s not like “Godzilla Raids Again”, where all the action is sped up like that, but when it happens, it’s very distracting. It just draws more attention to the fact that these suits are sluggish…and are suits. I personally would’ve preferred more city action, especially when Godzilla and Ghidorah clash. Their battles are both even, but short. Granted, his struggle with Biollante was arguably quicker, but it was more intense. Maybe I didn’t feel any of the intensity because I couldn’t get over the awkward special effects. But in general, I just didn’t like “Godzilla Vs King Ghidorah” very much. Its strengths (the monster effects) aren’t impressive when you remember that the Heisei era was able to recapture them for all of the movies. The only time I really enjoyed myself was when I was making fun of the film, but even that got old after a while. So If you’re a fan of “Godzilla Vs King Ghidorah”, you’re obviously seeing something I’m not. But I thought it sucked.

Violence: PG-13 worthy. There is a lot more death than usual and some blood squibs are used when the Godzillasaurus is mangled.

Overall: I thought “Godzilla Vs King Ghidorah” was laughably bad, but it does enjoy a decent reputation amongst the fanbase. So maybe you’ll disagree with me.