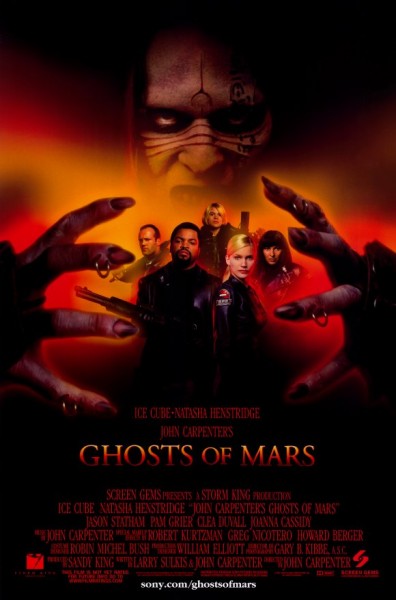 Plot: A futuristic police squad is sent to collect a dangerous prisoner known as Desolation Williams (Ice Cube) from a small town on Mars, only to find the place completely deserted. They quickly learn that a ghostly alien presence possessed the inhabitants, driving them insane, so the squad has to fight for survival- even if it means teaming up with Williams.

During the 1970’s and 1980’s, John Carpenter established himself as one of the greatest horror directors of all time with awesome chillers such as “The Thing”, “Halloween” and “The Fog”. He even proved he could make pretty cool actioners like “Escape from New York” and “Big Trouble in Little China”. Unfortunately, while these films are fondly remembered by those who’ve seen them, they were often box office failures upon their initial releases. Yet that never seemed to slow him down and he was attached to some big productions during the 90’s, but something seemed to happen during this period. It felt like he had run low on creative juices, rehashing previous ideas and his attempts to be trendy usually backfired. Most of these flicks weren’t awful, but they were  a noticeable step down from his earlier works. Yet his career still managed to barely stay afloat, allowing him to helm “Ghosts of Mars”, which had a decent budget for its time. Unfortunately, “Ghosts of Mars” feels like John Carpenter was doing his best Paul W.S Anderson imitation, but was then promptly possessed by the ghost of Uwe Boll. This movie is really, really, really, really bad. It was such a disaster that Carpenter temporarily retired. And for any asshole who points out that Anderson didn’t start the style he would become synonymous with until a year after this was released, I’d like to remind you that Uwe Boll is not dead. I just thought that was a funny line and if Paul W.S Anderson traveled back in time and made “Resident Evil” in the year 2000, while also killing Uwe Boll before he could make “House of the Dead“, what I said wouldn’t sound so stupid.

The film starts off on a wonderful note by showcasing some hilariously awful miniature special effects that totally derail the attempt to build mood. Some fans have justified this by claiming that Carpenter was making a throwback to the shoddy production values of the 1950’s, but that is a moronic excuse. “Intentionally bad” rarely works and any piece of shit film can hide behind that. The only way the effects could be excused is if the movie ended with the revelation that some kid was playing with his toy models, which comprised the bulk of the running time- which wouldn’t just give a good reason for the effects failures, but also would explain the sophomoric story. Actually, that would be an awesome final twist. I wonder if that’s been done before… Even when actual sets are used, the cinematography is so bad that everything seems small and fake. Carpenter’s use of red lighting and filters starts off kind of interesting, but as time moves along, it just draws attention to how ugly the aesthetics are. Everything is murky and unpleasant to watch. I’m not exaggerating when I say instead of looking like a $28,000,000 movie, it resembles a made-for-television special designed for the Scyfy channel. Whenever CGI, matte paintings or blue screen work is used, none of it is ever convincing, but it’s never terrible enough to be entertainingly awful. Like Paul W.S Anderson, Carpenter does his best to make the characters do these ‘cool poses’. The difference is that might be one of the few strengths Anderson really has, while whenever someone tries to look cool in “Ghosts of Mars”, they end up looking goofy instead. I couldn’t take their ‘coolness’ seriously. So the visuals sucked. 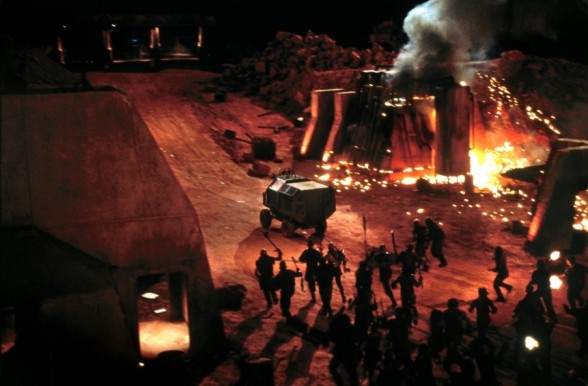 “Ghosts of Mars” was probably intended to cash in on the success of “Pitch Black”, as they had similar premises, but if Carpenter had originally envisioned the tone for this flick to be more like the tone from that flick. Even though people tend to remember “Ghosts of Mars” for its (sucky) high octane action sequences, there are only three major battles. The remainder of the runningtime is dedicated to building suspense, atmosphere and failing at building suspense, atmosphere. Characters will have (allegedly) ‘intense’ confrontations or slowly move through the sets as they try to figure out what in the hell is going on. For this to be a real actioner, it needed more…um, action! I’m only guessing, but I think Carpenter realized how badly he had missed the mark during post production, where editing and the score become the primary focuses. The music sucks, often being derived from hard rock tunes popular at the time, but it also doesn’t fit with what is occurring on-screen. When the score should be chilling during the scarier moments, it’s instead being hardcore and when the music should be hardcore, it’s hardcore enough. The music always seems like its building up to an awesome tune, but then never climaxing. That completely disrupted the tone. The editing is ATROCIOUS. Carpenter’s framing of the action was already pretty weak, but the editing often made the battles incomprehensible. I didn’t like how scenes would transition and often, SINGLE SHOTS would be edited. Characters would walk, but because apparently moving four steps is too much, the shot would fade into…two steps later? Jesus, Carpenter. I also want this movie to over with, but you don’t need to break the flow of EVERY FREAKING SHOT in order to save 2 seconds.

At first, I thought “Ghosts of Mars” had a pretty creative concept until I realized that it was just borrowing from a slew of other movies. “Pitch Black”, “Fallen”, “The Road Warrior”, “Planet of the Vampires” and all those crappy Mars movies that seemed dominate the late 90’s/early 200’s. It doesn’t have an original bone in its cinematic body, but it’s how the story is told that pisses me off. Why would you spoil who lives and who dies in the first scene? Having the survivor explain what happened AT THE VERY BEGINNING is always a bad idea, especially once she starts having other peoples flashbacks within her flashbacks. At first, it’s explained by having her pointedly say she is merely quoting them, except sometimes characters will be lying to her and we will be seeing the truth…God, such a damn mess…There are also a ton of plot holes, like why does everyone shoot to kill when they know that killing human hosts will only release the ghosts? Why doesn’t anyone aim for the legs or arms? How did that one guy- the first they encounter- have some control over himself when no one else does? If the higher-ups don’t believe this story, why would they just let her go? If she’s lying, shouldn’t she be arrested? Or if they think she’s mental, wouldn’t she be placed in psychiatric care? WHY DOES EVERY CHARACTER HAVE TO BE SO UNBELIEVABLY STUPID?! These cops are brutally unprofessional, constantly splitting up, dropping their guard, lying when there is no advantage to doing so or…that…that…THIRD…GOD…DAMN…AAAACT! They’ve escaped, but realize they must return to stop the ghosts…by nuking them…Why they think this would work when other means failed, I don’t know. Wouldn’t it be better to return to the base, report to their superiors and at least warn everyone? Risking their own lives for something that is likely going to fail is one thing, but they ultimately risked the life of every human on Mars by doing so. Although the stupidest moment has to come from the rookie girl, who shoots a jailed (therefore, secure) villain, even though she knows that will just..free…him…and her excuse? “because fuck him!”. Bitch, I hope you get your head cut off.

The acting is probably the best thing about “Ghosts of Mars”, which is pretty funny considering that it’s not very good. Carpenter has an impressive cast, but he uses them very poorly. Natasha Henstridge probably does the best, but only when she’s being the no nonsense soldier. When she attempts to share any deeper moments with either Cube or Statham, she seems uncomfortable (especially when she gives into Statham’s advances). Ice Cube does okay…He’d get better as an actor, but my only major complaint is that once he shows up, the majority of the supporting cast (including Statham) are practically reduced to being extras. He’s not THAT charismatic. This is the only movie where I didn’t like Jason Statham. I blame the character writing and the dialogue, but his flirting with the girl got old immediately. He was more sleazy than charming and I couldn’t tell if that was the point. The majority of the character interactions are just awkward to watch. The supporting cast does fine, but the better performers are underused and why was Pam Grier in this movie? She’s so over-the-top and campy, which actually could’ve sold the films alleged comedic angle, but she’s killed off almost immediately. Pam Grier as a sassy lesbian commander? That sounds awesome and she’s pretty amusing…SO OF COURSE THIS STUPID MOVIE WOULD KILL HER OFF IMMEDIATELY.

“Ghosts of Mars” isn’t the poor man’s “Pitch Black”, it’s the retarded man’s “Pitch Black”. Relax, fanboys, that is just another line that I really wanted to use even if it’s not really accurate. I just don’t like this movie. The plot is a mess, the characters are morons, the actors don’t often seem like they were getting any kind of direction, Carpenter didn’t seem to know what kind of movie he was making while the special effects, editing and cinematography just downright blow. “Ghosts of Mars” gave me a headache on just about every level, so don’t put yourself through the same agony. I can’t take the claim that this film isn’t intended to be taken seriously…seriously…because it’s never ‘laugh out loud’ bad. “Hobo with a Shotgun” is a film that made a comedic effort out of its badness. “Dead Sushi” is an even more extreme example. “House of the Dead“, on the other hand, was just a piece of shit that happened to make some people laugh. “Ghosts of Mars” is that same kind of piece of shit! Shockingly, it has developed a cult following, hopefully in the same way that Bruno Mattei has a cult following…This movie ended, or at least slowed down, many of the careers attached to it. Carpenter would do some “Masters of Horror” episodes after this before finally making “The Ward”, which was mediocre. Oddly, the best actress ended up struggling the most, as Natashia Henstridge went from being a scream queen to a TV supporting actress. Ice Cube would have more success as a comedian than as an action star, although luckily for him and Jason Statham, they were already being pushed so much as leading men that “Ghosts of Mars” was minor blip on the radar for them. But really, it’s just an awful movie that gave me a huge migraine with its suckitude. Now I need to wash the taste out of my mouth with a good John Carpenter movie…I’m thinking “In the Mouth of Madness“…Or what about “Prince of Darkness“? Was that one any good? I haven’t seen that since I was a kid.

Violence: Rated R. CGI and…off-screen…kills…Even the gore got on my nerves.

Nudity: None, although the leading lady gets in her undies.

Overall: “Ghosts of Mars” was annoying as hell, but it does have some fans, so maybe you should get a second opinion.