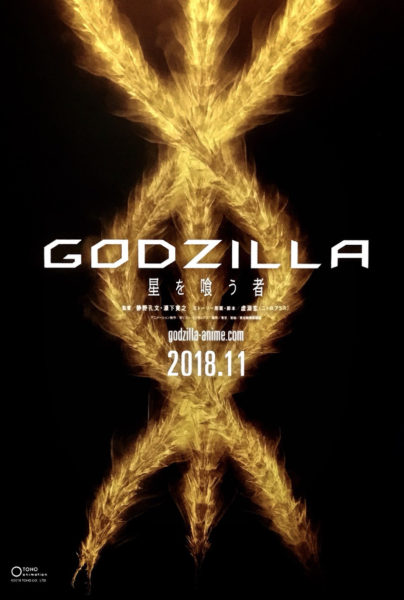 Even though I haven’t really been a big fan of this animated Godzilla saga, I have to admit that part of me is sorry to see it end. Say what you will about these movies, but they’re imaginative — even if a lot of their more interesting ideas function like wild fire and often damage the narrative. When I first saw “Godzilla: Planet of the Monsters“, I suggested that I might warm up to it over time depending on how the sequels turned out, but while “Godzilla: City on the Edge of Battle” was better…it was also worse…I wish I could tell you that “Godzilla: Planet Eater” was good…I wish I could tell you that “Godzilla: Planet Eater” was bad…My feelings towards Godzilla’s third anime outing are complex enough that I can’t even tell you whether I ended my viewing experience happy or upset. Now that the trilogy is complete, was this story worth it? I think so, but I can’t just recommend these movies to anyone. They will find their audience — what will certainly be a passionate cult following — but everyone else will feel alienated. The director himself admitted that he didn’t have much interest in Godzilla, so did his own thing, which reminded me a lot of Roland Emmerich’s opinions of the big lizard god when he made the highly controversial “Godzilla (1998)“. Perhaps “Godzilla: Planet Eater” is just not for Godzilla fans? But then… who is it for?

I will begin by saying that “Planet Eater” contained the most mesmerizing art direction of the trilogy, even if it still struggles with the same unappealing CG animation. King Ghidorah’s design has been radically altered and while this might be one of many things that will annoy fans, I thought it was an awesome re-interpretation of the character. The build-up to his arrival gave me genuine chills! His presence allowed for some powerful, breathtaking visuals…It’s just too bad that the monsters are so massive, that the actual battle is about as slow paced as the rest of then movie…and “Planet Eater” is f@cking SLOW. Most of the action comes in the form of…characters’ facial expressions…as they talk…I was okay with this for awhile, as I had finally become attached to the characters and their plights. The human drama is surprisingly compelling, as everyone has their own agenda and you get the impression that this conflict is above right or wrong. They are products of their cultures, their own experiences…and sometimes what they think is right is dangerous to other perspectives. I really respect the filmmakers’ bold creative choices, as the story explores some unpredictable territory…”Planet Eater” isn’t afraid to get dark with its content, making this Godzilla’s bleakest outing yet.

Throughout the second half, “Planet Eater” seemed to be drawing a lot of inspiration from “End of Evangelion“. The protagonist enters some sort of fugue state, where he’s forced to confront all of his emotional problems and the end result will determine the fate of the world. There’s a lot of random, provocative imagery and an unlimited supply of thematic material dealing with the human condition — sex, religion, violence, science, etc. Much like “End of Evangelion“, there is a lot of thought provoking, psychoanalytical material…buried underneath heaps of nonsense pretending to be thought provoking, psychoanalytical material. With that said, it also lacks the budget of “End of Evangelion“, so sometimes the visual style can’t keep up with the dense dialogue and I would grow bored…I’d say “Godzilla: Planet Eater” is traditional science fiction, being more interested in stirring up discussions than entertaining an audience. It’s very talky and so much screen-time is dedicated to characters explaining their fake science…Ghidorah looks awesome, but his fight with Godzilla is disappointing and the King of the Monsters spends most of the movie sleeping. But when all was said and done, I realized that I kind of enjoyed the ride, even if it was bumpy along the way. “Godzilla: Planet Eater” is…well, definitely part of this bizarre, frustrating and yet fascinating trilogy. You’ll either like it in spite of its flaws or hate it in spite of its strengths and I…Er…I like it as much as I dislike it, so have fun trying to decipher that!