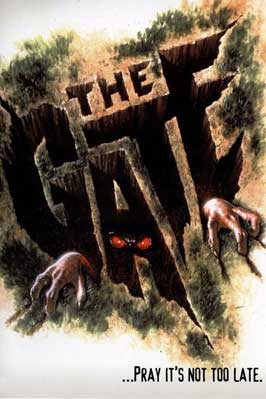 Plot: A little kid named Glen (Stephen Dorff) and his older sister, Al (Christa Denton), are left alone at home for the weekend. But the weekend goes to hell when Glen and his best friend, Terry (Louis Tripp), accidentally release pint sized demons from a hole in their backyard. Yeah…anyway, they have to survive the night as demonic forces terrorize them.

“The Gate” is one of those nostalgic horror films that terrified me as a youngster. One of my fondest memories is seeing it on television and the next day, everyone at school was talking about it. People would recount the scariest moments or affectionately make fun of the cheesier parts. Boys would scare the girls by doing that “YOU’VE BEEN BAD” line, which would be followed with lots of laughter. I was one of the only people who had seen the film prior, which made me feel important. The funny thing is this was in Middle school. So even at that age, “The Gate” left an impact. But I am now an adult and as an adult, I have to pretend that I give a shit about “2001: A Space Odyssey”! Can “The Gate” survive my pretensions?

“The Gate” is the perfect kind of horror movie for kids. It’s violent, but not sleazy. It’s scary, but also silly. It has characters whom we can actually relate with. Screenwriter Michael Nankin apparently based a lot of the script on events from his childhood, although I presume he didn’t release the forces of hell upon the world. But as an adult, he did unleash “The Gate 2”, which pretty much amounts to the same thing. Nevertheless, both Glen and Al are fairly realistically portrayed. Glen is the type of kid who goes along with his cool friend, even if it means he’s going to get in trouble for it. Alexandra just wants to fit in with the popular crowd, sometimes at the expense of her brother. But they never go too far with it. Those are just facets of their lives. Terry is more difficult to pin down as I never knew anyone like him. When I was a little one myself, I thought Terry was pretty cool. Now that I’m older, he feels more like a movie kid. He was still interesting though.

I also liked how the movie played with childhood fears. At one point, Glen gets nervous and is spooked out by mere shadows on the wall. I remember when I was around that age, I watched “Scream” and the night which followed had me convinced the room was filled with serial killers out to get me. Of course, it was just shadows of toys and other items that appeared menacing whenever some light would enter the room from outside. I could totally relate to Glen’s panic and the director did a good job at making the scene rather uneasy. There’s a grisly side to this too. You really do feel that the children are in danger and it’s startling to see them get hurt. These days, filmmakers are reluctant to have kids harmed in movies. Even with more recent films that likely borrowed from “The Gate“, such as “Don’t be Afraid of the Dark“, I never felt the kid was in any real peril. So imagine this from the perspective of a child who loves horror. Nobody is safe, not even us young ones.

But even if you take out all that nostalgia, I do believe there is an effective horror film at work. The creature designs are pretty creepy and the effects that give them life are surprisingly good. In a way, they’re even more menacing because of their size. A larger beast could probably kill someone with one bite, but these guys will swarm you like an army or piranha. Just the idea sounds painful. The final monster is rendered by stop motion and I thought it was well executed. More importantly, the director doesn’t show everything immediately. He builds up to their appearances, making their introduction more frightening. The set-pieces are incredible and I love how the movie continuously tops itself in terms of sheer spectacle. When the house starts falling apart, my jaw dropped. It looked great! The Matte paintings are a little obvious, but to me they added the right kind of atmosphere. It is very cheesy, but I adored that. The goofiness mixes in with the terror pretty well, creating a morbid, camp classic that also happens to be spooky. It’s rare when a movie can make you shiver and laugh at once. 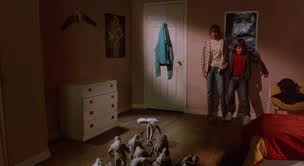 Now to enjoy “The Gate“, you’re going to have to accept it for its flaws. Beyond the traditional “it’s dated” argument- which I think is usually unfair- you’re going to have to embrace the bad dialogue and awkward acting. Most of the lines that fail are relatively simple ones, such as “You’ guys are my best friends“. It’s pretty gag inducing and the acting itself is uneven. Stephen Dorff seems too passive at times, making me wonder if the director occasionally forgot to direct them. But none of this was bad enough to effect my enjoyment. You’ll have to excuse the silly plot as well. The Gate is opened only because of contrived writing. It just so happens that everything the demons need to be unleashed occurs within a short time-span. Alright, so the constellations need to be aligned or some nonsense like that. Okay. They need the hole to be opened and lightning happens to strike it. Maybe the demons caused that? They need blood. Whoops! Glen accidentally cut himself. But they need a sacrifice too! Hey, the dog just died and the animal hospital happened to be closed. What is a teenager to do? Oh, there’s a hole in the neighbors backyard! Let’s bury the animal in there. Oh yeah, the ancient words need to be spoken. Aw shucks, the kids said them aloud. But these are complaints that add to the movies’ charm, in my opinion.

“The Gate” is one of those movies that benefits from its strengths and weaknesses alike. Its failures adds to its camp value, which makes the movie a lot more fun. But it also has its fair share of bone chilling moments too. It makes me nostalgic on two different levels. As a kid, this movie spoke to me and I really felt like I was part of its world. Yet it also reminds me of 80’s horror in general, which was much more creative, ambitious and riskier than what we get today. This is a movie that makes me shed off my poser critic status and squeal “cool!” as loud as I can. It’s not for everyone, especially if you haven’t grown up for the feature. But whenever I watch it, my inner child comes out and I can’t really bring myself to dislike anything about it. I sure miss the 80’s.

Overall: If “The Gate” was part of your childhood, revisit it! If it wasn’t, I’d recommend it if it sounds interesting to you.