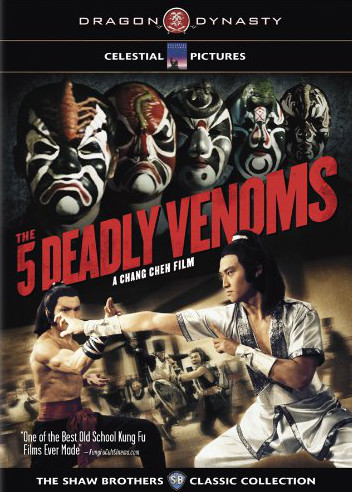 Plot: A dying kung fu master instructs his final student, Yang Tieh (Sheng Chiang), to investigate the activities of his former pupils. He had taught each a different style of kung fu- the centipede, snake, scorpion, lizard and toad- but is concerned that they’re abusing their skills. If they are corrupt, then Yang Tieh (who hasn’t mastered any style, but knows some of all of them) must kill them. Also known as “Five Venoms” and “Wu du“.

“The Five Deadly Venoms” is one of the most iconic kung fu flicks of all time. It propelled the Venom Mob into stardom in the East and helped shape what westerners thought of the genre when it became a big hit on TV in the west. Admittedly the impact of “The Five Deadly Venoms” on foreign audiences tended to be based around the corny dubbing and exaggerating mannerisms, which is ironic as the English voice acting no longer really stands out. Despite this, the film is often referenced positively in pop culture- both in the East and the West- and it does have a glowing reputation amongst fans…Yet strangely, I never saw it until now. I have seen plenty of Cheh Chang and Venom Mob flicks and would consider myself a fan, but I never got to their breakthrough project…because apparently I had to spend my time watching crap like “South Shaolin Vs North Shaolin“. Maybe if it had fire breathing ninja and ghostly drag queens, I would’ve gotten to it much sooner…”The Five Deadly Venoms” boasts exceptional direction by Chang Cheh, ambitious writing by Kuang Ni (and Chang Cheh) and good martial arts action by the Venom Mob…I do find it strange, however, that I’m less enthusiastic in regards to the kung fu in this kung fu movie…even though I’m definitely a fan.

Writing a plot description for “The Five Deadly Venoms” is difficult because the basic idea is almost misleading. The meat of the story surrounds the titular five venoms as they conspire to steal their Uncles treasure, the problem being that his identity is a mystery. On one side you have Inspector He (Phillip Kwok) and Li Hao (Meng Lo) of the gecko and toad styles, who seem to be the more heroic of the venoms. Even though they are technically ‘heroes’, they aren’t traditional good guys. ‘He’ isn’t above bribes, drinking and gambling while Li is a bit too eager to beat something up. Their opponents are Hong Wentong (Pai Wei) and Tan Shan-kui (Feng Lu) of the snake and centipede styles. They are certainly the villains, but there does seem to more to them than just being the bad guys. Tan is a lot like Li and it’s kind of amusing seeing how their stories parallel each-other throughout much of the duration of the film. Hong is the brains of the outfit, being cold and vicious, but he does get a scene that humanizes his character. Even though they’re villains, they do seem to have an admirable amount of loyalty to each-other. Even though they trained under the same master, Team A does not know who Team B is and vice versa. Furthermore, the Scorpion practitioner lurks in the shadows, his identity a mystery. I really liked the heroes and villains as they all had distinct personalities and were able to showcase a variety of emotions which you don’t see too often from these kinds of characters. Pay attention to Tan’s facial expressions during the ending, as he’s clearly conflicted about what he should do. A lesser movie would exclude that, showing only his aggression and other villainous attributes. Everyones interactions are a lot of fun and I liked the mystery which surrounded the story. The various schemes, planning and traps were all very compelling. I’m a fan of kung fu flicks, but it’s nice when more effort is put into the story. Of course, you might be wondering where our protagonist, Yang Tieh (Sheng Chiang), fits amidst all of this intrigue. Unfortunately, this leads to the films biggest failure, as he feels like an afterthought. He seems to vanish for large periods of time and I occasionally even forgot he was still around. While Sheng Chiang’s performance is fine, his character a traditional, naive country pumpkin who just happens to know kung fu…except he doesn’t even stand out in that regard because he’s decent at everything while excelling at nothing (in story). They could’ve definitely done a better job at incorporating him into the plot, but he doesn’t drag it down either. Obviously the writer realized that the five deadly venoms were more intriguing characters, but it was too late to get rid of him. At least the spotlight was put on the right people though… 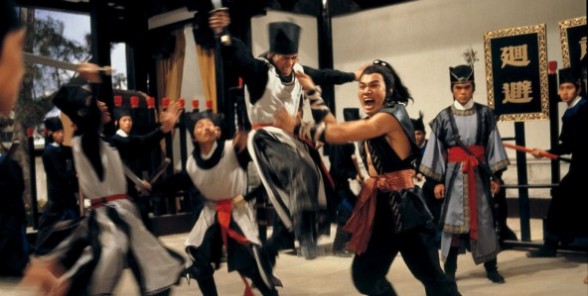 I’ve always had mixed feelings towards Chang Cheh’s…lack (?) of style. Visually, his films tended to blend together, not helped by his reliance on formulaic scripts and characters. I’ve seen dozens of his works and while I remember giving giving many positive reviews, but I can’t remember much beyond their names. I know I’ve seen “Two Champions of Shaolin“, but I don’t remember which one it was. Yet I vividly recall one of his lesser films, “Heaven and Hell“, because it did have a distinct visual style…which I presumed reflected the acid trip Chang Cheh must have been on (seriously, see the movie and tell me drugs weren’t involved in the production). Sometimes its admirable for a director to restrain himself from any flashiness though and the imitators definitely watered down Chang Cheh’s aesthetics due to overexposure. “The Five Deadly Venoms” continues Chang Cheh’s simplistic approach…except it’s just better. The sets are more attractive, the camerawork is sharper with some excellently framed shots, the lighting is often chilling and the music is atmospheric. Yet it serves the story, characters and action instead of upstaging it. Yet “The Five Deadly Venoms” is more sophisticated on a technical level than most of his flicks…and kung fu flicks in general. As for the kung fu choreography, it’s…good. I liked how everyone has distinct styles and the use of wires added flavor to the fights. There isn’t a massive amount of action, but it’s paced so smoothly that I never really noticed until afterwards. Once again, Yang Tieh- our supposed hero- is the weak link as his ‘capable of everything, master of nothing’ style seems bland in comparison to what everyone else is delivering. Of course, the biggest issue surrounding the fighting in “The Five Deadly Venoms” is that I’ve seen a lot better by these same people. That’s kind of a stupid criticism, but it did often pop in my head throughout my viewing experience. If you want to see the group at the top of their game, watch “The Kid with the Golden Arm“. “The Five Deadly Venoms” works primarily due to its characters, storyline and strong direction. The fighting itself is really just icing on the cake.

Violence: Rated R worthy. There are some disturbingly creative ways to kill and torture people. I often cringed.

Nudity: None. Were there even any females?

Overall: “The Five Deadly Venoms” isn’t just really good, it also stands out in a genre where the majority of the films resemble each-other in stories, characters and aesthetics. Not this one though. It will remain secure within my memory.