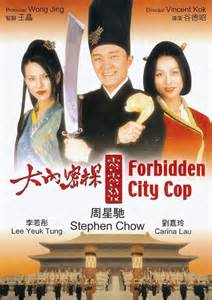 Plot: Ling Ling Fat (Stephen Chow) is a bumbling inventor who also happens to work as an Imperial Guard, albeit a controversial one who is even disrespected by the Emperor. But he finds himself drawn into a plot to assassinate his liege, so has to use his inventions to save the day.

Even though I am a huge kung fu enthusiast, I’ve oddly never had many encounters with Stephen Chow, despite him being a HUGE star in his native country. Sure, I’ve had a few sparring sessions with him, which ended amicably with both “Kung Fu Hustle” and “Shaolin Soccer“. But even though those were positive experiences, I ended up shying away from “CJ7” because of negative word of mouth and I could never really muster any interest in checking out his earlier works…Oh yeah, he also had a hand in producing “Dragonball: Evolution“…Yes…Of course, almost ALL of his movies have been waiting impatiently on my Netflix account, but they’ve never fought their way onto the top of the list…until now…Although its presence in my DVD player was actually kind of an accident. I was supposed to watch a Steven Seagal movie, but I got the dreaded “Very long Wait” ambushed me the day it was supposed to venture towards my mailbox…I’d like to think that “Forbidden City Cop” challenged “Submerged” to a kung fu fight and whipped its bloated, boring ass off my Netflix queue, before taking its rightful place. I’d also like to think that there will be a sequel to this feud, where “Submerged” rises from the dead and murders the family of “Forbidden City Cop“, starting another chaotic war- Okay, this review is weird. In my defense, “Forbidden City Cop” is pretty weird too. It’s so strange and bizarre that “Dead Sushi“- the movie about flying, zombie, killer, fire breathing, hormonal sushi- looks sane in comparison. But those who understand my tastes know that I’m tired of the ordinary, conventional flicks that take no risks, so “Forbidden City Cop” immediately got into my pants with its strangeness. But the unique fight scenes and hilarious comedic antics seduced me into a satisfying relationship.

I suspect that part of the reason I never pursued Stephen Chow is that he adores slapstick comedy- which I fear within the realm of kung fu. Yes, what I’ve seen of him has consistently made me laugh, but when Hong Kong comedy goes bad for me…It’s like watching a brutal rape unfold before my eyes and sometimes these comedic flicks will actually have a brutal rape unfold before my eyes…”Forbidden City Cop” definitely has its moments where it’s too noisy and hyperactive, which I’m sure sums up the entire movie for the detractors. But I thought it was hilarious. There are a lot of great lines and funny situations, like when the doctor starts taking medical advice from his patient. That in itself was already amusing, but Stephen Chow’s facial expression when he realizes what just happened elevated that gag so much. Chow has great comedic timing and even when his performance becomes broad, the movie sort of acknowledges it and uses that as a strength. All the performers have perfect reactions to the wild and strange occurrences surrounding them, which often drove the comedy. Hell, even the mood whiplash seemed intentional and added to the humor. There’s a disturbingly violent battle where the villains are mortally wounding the guards, but the editing ends up turning their grisly deaths into jokes. A villain attacks the testicles, but before the strike actually hits, it cuts to our heroes breaking a pair of eggs. That cracks me up! The fight scenes are very…90’s…in that there’s a lot of wire works and violence (lots of injuries linger, like bruises, although it’s still played for laughs). Yet I thought it found the right flow and although there are only two major fight scenes, they were pretty phenomenal in their own way. The characters often have gimmicks- one uses puppetry, another acts like a ghost, etc- but they’re used in a way that delivers plenty of fast paced and unique battles. I was concerned because Stephen Chow’s character isn’t a martial artist, but the way he uses his inventions to assist him during the battles made up for it. His limited abilities never slowed down the action. 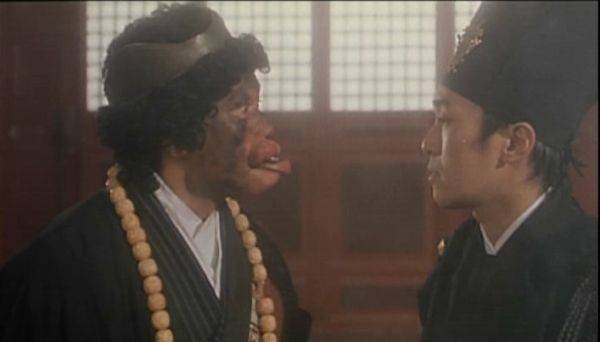 Yet above everything, “Forbidden City Cop” is unpredictable. Many might complain about the lack of plot, or more specifically, how the plot seems to change during the second half. At first, I thought it would be about our hero trying to rescue the Emperor. The first half of the movie is dedicated to that, but eventually it becomes more about his fall from grace as he is seduced by a suspicious prostitute. Even though the big revelation regarding her is pretty easy to follow, the movie knows this and doesn’t even treat it as a real twist. Yet it’s surrounding by so many good twists that I ended up being shocked anyway. But for me, the plot threads- while startling- weren’t what stood out the most as much as it was just the strange ideas which accompanied them. The villains try to have the emperor assassinated by his own people, so what do they do? Put him in an alien costume and let the doctors dissect it…Who thinks of this crazy ass shit? A madman, surely, but this madness is beautiful. “Forbidden City Cop” NEVER runs out of unusual ideas, sometimes even going out of control because of them. Have you seen “Anchorman 2“? Remember how there would be so many random, weird inclusions, such as the shark? “Forbidden City Cop” is similar to that, except MAGNIFIED. Many might think it went too far and was merely unfocused. I understand that complaint, but it appealed to my sensibilities. Yet beneath all of this insanity lies a beating heart. I genuinely cared for the characters and their relationships. The romance between Stephen Chow and Carina Lau is SOOOO adorable, which makes his later straying kind of heartbreaking. So I was emotionally invested, constantly thrown off guard, enjoyed the action and laughed at the comedy. I loved it! Yet I will concede that it is not for everyone. It’s…really, really, really, really, really, really, really, really f@cking weird. Random Note: The James Bond references were pretty clever too.

Violence: Rated R worthy. Hong Kong cinema was pretty gory during the 90’s, although the violence here never unsettled me.

Nudity: None, although there is a fair amount of sexuality.

Overall: “Forbidden City Cop” is a riot, even though it’s much more of a comedy-spy saga than it is a traditional kung fu flick.