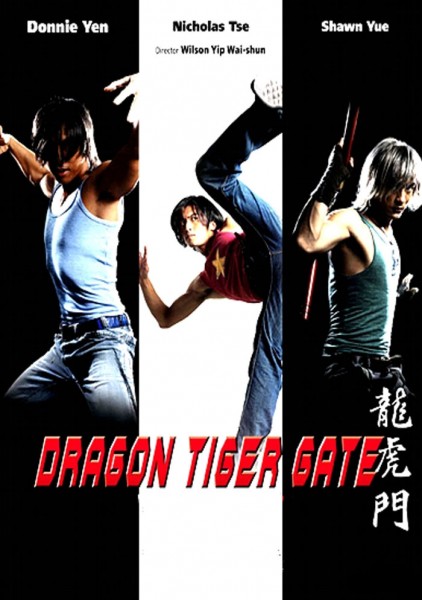 Plot: Dragon (Donnie Yen) and Tiger (Nicholas Tse) are two brothers who were separated as children, resulting in them going down vastly different paths, despite not being very different themselves. But they must unite when a bloodthirsty criminal threatens the people they love.

Damn it, Donnie Yen, you have disappointed me two times in a row and I haven’t even gone near your 90’s output. My last Donnie Yen experience was with “Seven Swords“, which I thought was the equivalent of a bloated, absent minded old dude whose feet had been cut off so he could fit in a hobbit dwelling even though he clearly does not belong there…and no, that is not a metaphor for Tsui Hark’s career…I think…Honestly I have no idea what the f@ck that means, but I do know that I disliked the movie. Yet I love me some Donnie Yen actiony goodness, so chose “Dragon Tiger Gate” to wash the taste of “Seven Swords” out of my mouth. Unfortunately, that is like washing your mouth out with urine to dull the fresh taste of semen- okay, this review is getting uncomfortably weird and I apologize for that. “Dragon Tiger Gate” enflamed my wrath not because it’s terrible (it’s not), but because it tricked me into thinking that I would be entertained. The first act is pretty awesome, but just as you let its warmth wash over you, the second act arrives and it’s numbingly cold…and then the third act drenches you with piss and semen, completing this bizarre metaphor. For the sake of this review, which I promise will contain no more references to any potential or allegorical fetish I may or may not have, I will break “Dragon Tiger Gate” into its three act structure and describe why it is such a train wreck.

Act 1- This is pretty cool: “Dragon Tiger Gate” immediately catches your attention with its unique visual style. The sets are all colorful and the use of CGI for the backgrounds establishes this world as something that’s not quite like our own. It has a certain anime-ish flavor, although I suppose comic book fans would claim it is more akin to their medium as “Dragon Tiger Gate” is based on a popular comic. The fight choreography is fast paced and exciting, primarily focusing on 1 (or 3) skilled warriors mowing down hordes of mooks. Despite the occasional special effect boost, the fighting is primarily driven by cool posturing, fancy techniques and what appears to be genuine martial arts. I expect this from Donnie Yen, but imagine my surprise when “Dragon Tiger Gate” somehow convinced me that Nicholas Tse is a legit badass. That just doesn’t happen very often. Wilson Yip’s camerawork is very playful and unconventional, capturing the battles using odd angles, but it never upstages the action at hand. It also helps that two major fight sequences occur during the first act, so there wasn’t any downtime and I was sure I was in for a martial arts treat. So…what in the hell happened?

Act 2- This is pretty boring: While there is still action, “Dragon Tiger Gate” unwisely chose to scale it back and focus more on the growing drama. This isn’t the kiss of death, as Wilson Yip is one of the few directors who can successfully balance martial arts spectacle with tear jerking emotional conflicts, but Edmond Wong’s script is too unfocused. Why was Turbo here again? I found nothing wrong with the character, but he didn’t add anything to the story and could’ve easily been omitted. I suspect that he was a prominent player in the comic books, so this is a problem with being an adaptation in general. Unless he serves a purpose within the narrative he will be unnecessary, but to leave him out is likely to infuriate the fanboys. Yet I’m not one of those and I thought his subplot only took more attention away from the more important subplots. Dragon’s relationship with his boss, his sister, his quasi-love interest and even Tiger all feel glanced over. We’re supposed to care because the movie asks us to, but I couldn’t make an emotional connection to anyone. In the case of Tiger, it’s especially jarring as the film pointedly sets them up as rivals, but suddenly they are friendly. What’s even stranger is that Tiger is set up to be the hero, while Dragon is the anti-hero, but eventually Dragon overtakes his brother in terms of importance. Tiger is more prominent during the first half, but is eventually treated as an afterthought while Dragon is the one who actually does everything of importance. Tiger’s relationships are also glanced over and it’s annoying that his love interest has this whole segment to herself, where she saves Tiger and Turbo, even getting them a power upgrade, but then the ending reveals that it was all for nothing. It was wasted time. Dragon has to do everything, so that segment should’ve been dedicated to getting HIM the powerup, not Tiger and Turbo. “Dragon Tiger Gate” has no substance. It’s all filler. Yet based on how it presents itself, the movie seems to think it’s deep. The whole “Martial arts isn’t about strength or power, it’s about heart” speech has become a cliché, but based on the way Turbo says it, I was supposed to be moved to tears. But as much as “Dragon Tiger Gate” wanted me to be moved, I stood in place on an emotional level. I could care less about what was happening and the occasional bursts of kung fu couldn’t help me maintain my interest. The visual style also loses its impact after a certain point. The sets and backgrounds all start to seem kind of mundane in contrast to the vivid and wild visuals of the first act.

Act 3- This is pretty stupid: The finale really feels like it belongs in a different movie. A lot of the second act tones down the more superhuman aspects of the kung fu, so their world started to seem very much like our own. But the third act buries its locations in CGI, giving the film a cartoonishly over-the-top feel and the villain…God, I could not take this guy seriously. Admittedly he’s pretty goofy from the beginning, but the more he shows up, the more out-of-place he looks. Hell, he would’ve made a great villain during the 90’s wave of cheesy-yet-grisly fantasy films like “The Heroic Trio“, but he’s practically an anachronism by 2006. The fighting is pretty good when it decides to focus on the traditional choreography- which the opening act did, only sparingly using special effects. But the final battle goes all out in turning “Dragon Tiger Gate” into a fantasy, because characters start using mystical kung fu. I don’t mind this in theory, but the CGI is weak and maybe this style of action should’ve been introduced much earlier. Imagine if “Hero” replaced its finale with something that belonged in “The Storm Riders“. The action isn’t bad, but much like the villain, it’s very out-of-place. On a story level, once again I found myself annoyed that they spend so much time giving Tiger and Turbo new abilities only for them to be used as a measuring stick for the villains powers…while Dragon, who didn’t get a power up, seems significantly stronger. I guess that’s what happens when the actor playing said character played a major role behind-the-scenes of this production…Regardless of the reason though, “Dragon Tiger Gate” went from being cool to dull to dumb.

I’m not sure if it’s better that this viewing immediately followed “Scorpion Thunderbolt“, which does make this movie seemed focused in comparison, or worse because now I’ve just made a comparison to “Scorpion Thunderbolt“. Don’t get me wrong, even if “Dragon Tiger Gate” is just as bad as I think it is, it’s still LEAGUES better than that piece of shit…But I expect more out of Wilson Yip, which probably makes this flick seem worse than it really is. As negative as I am, most viewers seem to be more appreciative. If you had a positive reaction to the film, then good for you! It definitely has its moments of awesomeness, but those moments tend to float towards the beginning of the feature. Once you get past the first act, everything just sort of meanders and goes through the motions, at least until it reaches the eye rolling inducing finale. Is it at least better than “Seven Swords“? Well, it is shorter and the higher points stood out more. I’d certainly rather watch “Dragon Tiger Gate” again, if I was forced to choose between the two. But “Dragon Tiger Gate” disappointed me a lot more- which stung a lot harder once I realized that the film will never be able to top its first 25 minutes.

Overall: “Dragon Tiger Gate” has its fans, but while I thought it had a strong start, it began to fall apart when it attempted to be ‘more’ than just action spectacle. It was simply too shallow to be successful as such. It’s probably a 2/4 star movie, but I’m going to be harsher because of my own negative reaction.