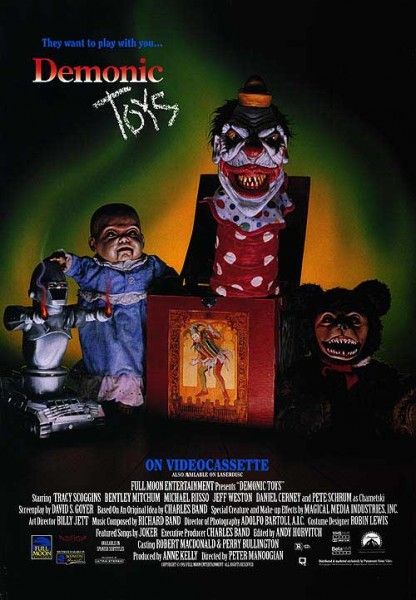 Plot: Cops, criminals and other various victims find themselves trapped in a warehouse with a demon- who has brought his toy collection to life so they can sacrifice them all.

I reluctantly decided to watch “Demonic Toys” in order to prepare myself for “Puppet Master Vs Demonic Toys“, which I hear is…delightful…Quite frankly, I’m tired of murderous dolls and I feel like this franchise marathon has already eaten up too much of my life. But I wanted a break from the Puppet Master series and needed to remind myself of what a REAL B-movie looks like…and “Demonic Toys” was produced during the tail end of the golden era of exploitation, before B-movies started to resemble D-movies. When “Puppet Master” was a hit, Full Moon Entertainment had found its calling and began a trend of killer toy movies- including the subject of today. “Demonic Toys” turned out to be surprisingly entertaining, offering all of the over-the-top gore, cheese and weirdness that I wanted out of the more popular “Puppet Master“. However, I can already feel it dissipating from my memory and I noticed that the titular demonic toys became increasingly irrelevant as the narrative progresses. I have to stress that ‘fun’ does not always mean ‘good’, although those who dance in the realm of B-horror should get what I mean.

I have to admit I giggled nervously as the little villainous objects revealed themselves, because they resemble real toys. None of them have drills for heads or hooks for hands, but instead are the kind of playthings that your kids might have. Yet the director does a good job at surrounding these rather mundane things with an ominous aura. When they sprout sharp teeth, bloody jaws, malicious eyes and potty mouths, I was like “holy shit! This is awesome!“. While many have complained about the special effects, I thought they were pretty convincing when they needed to be. There are definitely moments where you can tell that they are inanimate, but more attention was put in the close-ups and they were what stayed with me in the long run. I don’t recall any stop motion animation, so considering traditional puppetry (and maybe some animatronics) was used to bring the effects ‘to life’, I thought the toys looked freaky! When they attacked, I was cringing as their methods of murder were vicious! People get flesh chewed off, stabbed in the eye repeatedly, punctured with laser beams- NO ONE GETS OFF EASY…except the guy who you really did not want to see get off easy…Yet lets face it, the reason why “Puppet Master” got all the sequels is they had much more memorable villains. You can base a franchise around Blade, Pinhead, Jester and company as they have unique and marketable appearances, but…evil looking teddy bear? Nah, the novelty is lost after awhile. Baby doll who spits out profanity? Na- Oh wait, “Child’s Play” did that. Nevertheless, the attack sequences are brutal and gory, which works as the films backbone. 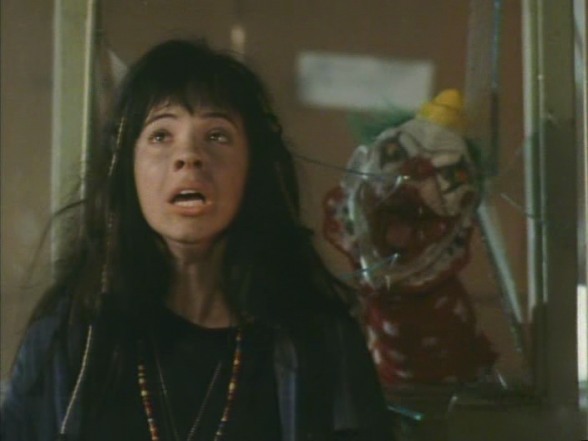 “Demonic Toys” is definitely 80’s cheese, even though it was produced and released in the 90’s. It’s mean enough to have an edge, but silly enough to be a good lark without any emotional baggage. The acting is shockingly good, but the over-the-top moments are craptastic and they have the tendency to really stand out- for better or worse. This was an early David S. Goyer (“Batman Begins“) script and much like all of his earlier- and later- works, he tends to overreach. There are some intriguing ideas, but I couldn’t help but feel that “Demonic Toys” was more complicated than it needed to be. There is too much stupidity within the writing- inept police-work, stupid decisions to drive the story, a double barreled shotgun that rarely runs out of bullets- to take this movie seriously. Yet I suspect Goyer wants me to based on just a few sequences. I’m still trying to wrap my head around the finale, as I had presumed that the kids represented God and Satan. But before I could deduce whether there was some sort of statement being made about the Deities being children, they give another explanation that makes no sense. I guess Goyer deserves points for ambition though and I will admit to enjoying the characters (somewhat, sometimes). I consider Goyer to be an enthusiastic writer who always tries his hardest, but tends to be distracted by superfluous ideas that clutter his narratives. “Demonic Toys” is an early example of this, although it highlights his strengths more than “Kickboxer 2” did- which he had penned a year prior.

Yet I felt “Demonic Toys” started running out of steam during the middle block, when it began to focus more on the demon, at the expense of his toys. I thought the kid was perfectly cast, as he somehow managed to be charming, smug, adorable and unsettling all at once. But I still would’ve preferred more toy action and the fact that the movie had suddenly become much more talky didn’t really do the pacing any favors. Many have complained about the location becoming monotonous after awhile, but that didn’t bother me- probably because of the strange props that littered the backgrounds. I can see why this movie would turn many viewers off, as you have to enjoy these kinds of low budget, vulgar, campy splatter flicks in order to get any enjoyment out of it. But I always found entertainment out of something, whether it was that suavely evil kid, the grisly kills, the freaky toys, the goofy dialogue (the baby!) or its overall weirdness. “Demonic Toys” is one of those B-movies that defines what a B-movie is, for better or worse.

Nudity: There are some breasts and an attempted rape.

Overall: “Demonic Toys” is the quintessential B-movie, or at least the charming version of one. Whether or not it’s worth watching is up to you.