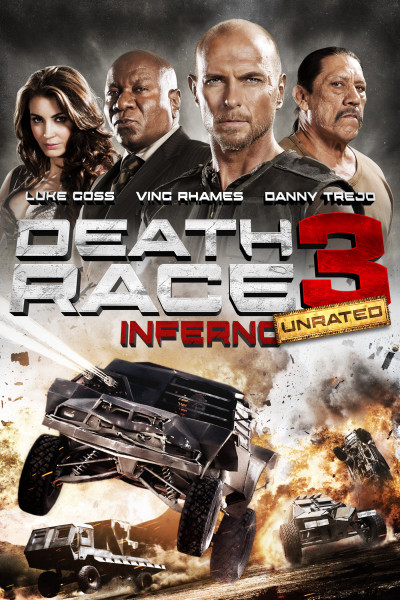 I was one of the few people who watched Paul W.S Anderson’s “Death Race” in the theaters and recall being underwhelmed, a sentiment most viewers agreed with as the movie underperformed at the box office. To this day, I still believe it borrowed more from Lucio Fulci’s “New Gladiators” than it did from the original “Death Race 2000” and that was its most memorable trait. Yet my opinions softened when I viewed it on DVD. Away from the confines of the theaters, where expectations tend to be higher and opinions are tougher, “Death Race” is a pretty fun experience, a sentiment most viewers agreed with as it soared in DVD sales. Hence, “Death Race 2” was produced and much to my surprise, it was also pretty good. It was as if the filmmakers were trying to create a badass actioner with a real plot, despite the low budget- instead of just aiming to make a quick buck. Because that was also a success, “Death Race 3: Inferno” was born. Sadly, “Death Race 3” ended up being what I feared “Death Race 2” would be: A shameless exploitation of its audience. It’s just…kind of sucky.

“Death Race 3” took the flaws of “Death Race 2” and magnified them. The hand-to-hand fight scenes aren’t quite as sluggish as they were before, but that might be because the editor has cut every movement so tightly to make it seem faster and more exciting. The problem? It makes the action so f@cking incomprehensible that I could barely tell who was who, what the f@ck was going on or what they were f@cking doing. It’s not helped by the jittery camerawork either. Actually, that sums up ALL of the action. The actual death races rely a lot on quick-cut editing, obscuring all the mayhem, before occasionally cutting to a character saying “Hell yeah!” or “Take That!” (usually with more profanity). Like in the previous film, Reine will slow down the camera to catch an epic shot, but none of them stood out as particularly cool. “Death Race 2” also struggled with tightly nit action scenes, but it wasn’t THIS bad and when it would use slow motion, it could capture sheer awesomeness. Maybe its because the sets are kind of boring this time around. The Africa idea is sort of interesting, until you remember that most of the races take place in a barren desert. That’s…pretty dull. There is a lot of chaos going on, but because the action was so poorly edited, I couldn’t enjoy it. Therefore, I found “Death Race 3” to be more exhausting than exciting. 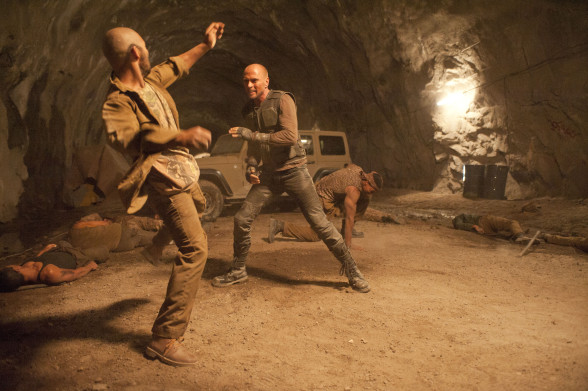 Say what you will about “Death Race 2”, there’s little-to-no denying that at least there was genuine effort into fleshing out the story. Instead of just completely rehashing the (minimal) plot of the original, it tried to expand upon it. “Death Race 3” is mostly plotless. I wouldn’t mind had I liked the action, but since I couldn’t stand it, I have to put on my big man critic pants and judge the script. The writer apparently thinks very low of his audience, as everything is explained so excessively so we can understand what’s going on. I mean, apparently it takes five different scenes to remind us that if Frankenstein wins, he and his friends will be killed. Apparently we need an assload of scenes demonstrating that Niles York is an asshole. We need plenty of scenes showing how Death Race is a rigged competition and we need a handful of moments dedicated to the STILL BORING love story. Even when the movie throws an admittedly cool twist our way, its impact is diminished by spending like FIVE MINUTES explaining everything that happened IN DETAIL, even though I thought it was pretty f@cking obvious. Otherwise, there isn’t anything noteworthy about the script. It’s just similar scenes repeated over and over again.

Is there anything good I have to say? Well, as I said, I did like the final twist before the writer flaunted his supposed intelligence by cramming the ‘how’ down our throats. The acting is okay, even if the attempts at comic relief were more awkward than amusing. Otherwise, this was just a very unpleasant experience for me. The script was insanely redundant and mostly uninspired, while the action was so ineptly shot and edited that I almost preferred the repetitive talking sequences. Also, what was with those backlights? SO DISTRACTING! Director Roel Reiné and Writer Tony Giglio had previously gone out of their way to create a compelling and worthy sequel with “Death Race 2”. But it seems their mentality has changed since then, as “Death Race 3” felt like they were just trying to make a quick buck. They’re taking the audience for granted and I’m not sure if I want to continue following this duo.

Violence: Rated R. It’s not really that violent though…

Nudity: Sort of. There’s a flashback to its predecessors sex scene and Danny Trejo gets naked (EEEP!).

Overall: I wouldn’t call “Death Race 3” awful, as I’ve seen plenty of worse direct-to-DVD movies…which usually starred Steven Seagal. But it is pretty bad, albeit in a ‘below average’ kind of way.