Plot: A bumbling detective (Anthony Wong) suspects that Mak Wei-Fong (Lily Chung) was the one who slaughtered her family. But when he learns that her family abused her relentlessly, with her Father (Ka-Kui Ho) even raping her, he must wonder who the victims really are.

“Daughter of Darkness” is one of those Hong Kong Category III features that I dread having to sit through. For the uninitiated, Category III is the western equivalent of NC-17 or Rated X, except Hong Kong is significantly more twisted in regards to what filmmakers are willing to put out. I’ve seen plenty of NC-17 American splatterfests, but they’re time in comparison to their Eastern counterparts. Can you think of any western examples which contained ‘death by chopstick rape’? Thanks to “The Untold Story”, that is a thing. Hong Kong is notorious for taking extreme violence to new levels, while not sparing ANYONE- man, woman, adult or child- from sexual assault or grotesque murders. As a gorehound myself, you’d think that I’d wrap Cat III in my arms and give it lots of hugs and kisses, but this is one style of horror that I’m wary to experience. It just takes the trashiness too far, while exaggerating Hong Kong’s greatest cinematic flaw: The tone. Nihilistic tragedy does not mesh well with goofball comedy, so I end up getting angry at the movie for both taking itself too seriously while not taking itself seriously at all. “Daughter of Darkness” is one of the better Category III films I have seen thanks to the acting, but it is a typical example of its ilk. You have to contend with drowning in a pool of sleaze, while enduring its bizarre mating of rape and comedy.

Throughout the first 20-30 minutes, you’ll find yourself wondering if you’re watching a thriller or a comedy. The story initially follows the goofy detective played by Anthony Wong and there’s plenty of hijinks to be found. Hong Kong comedy has always been pretty broad and noisy, but “Daughter of Darkness” is broader and noisier. It does quickly descend into black comedy territory when they come across the crime scene and start re-enacting what they presume to be a rape. It’s very tasteless and will offend many viewers- especially if you’re unfamiliar with Cat III. Despite the humor, the conditions of the corpses are very messy, which at least kind of foreshadows how demented “Daughter of Darkness” will become. The cops appear to be incredibly stupid, which is supposed to be funny but ends up being grating, but they are smart enough to quickly figure out that the surviving member of the family and her boyfriend cop are the likely culprits. The only time any of the jokes made me laugh were based around Anthony Wong’s troll logic. In fact, he’s actually kind of a compelling character even though he will provide you with the most headaches. He acts like a corrupt moron, but he does eventually figure things out and he seems more honest than initially thought. But I laughed whenever he would say some absurd comment about why someone is a suspect (the victims were shot, and you’re playing an action movie across the street, so you must be in on it!). It’s too bad that you end up despising him for outright MOLESTING corpses, which once again, is played for laughs. If this sounds too disgusting to be amusing, then don’t bother watching “Daughter of Darkness“. That is this movie in a nutshell. 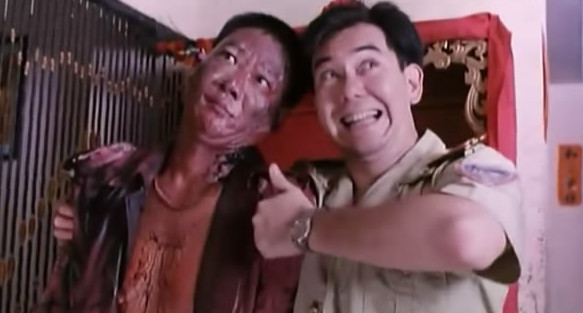 The comedy- while still present- is scaled down when Lily Chung takes the stage and it becomes apparent that she is the killer. Or maybe her boyfriend is. Either way, she’s not innocent, but she recounts ‘why’ she did it and we learn that maybe this family deserved their grisly fate. One thing I will concede with Category III flicks is that even though they often like making neighbors of graphic rape and slapstick comedy, the rape itself is usually not portrayed as funny. The general abuse directed at our heroine is so over-the-top…and noisy…that it’s hard to take seriously, but Chung’s sincere performance makes you feel bad for her. Once the sexual assault begins, it’s never eroticized or light hearted. It’s depressing, uncomfortable and brutal. Contrast the rape to the sleazy trysts between her Father and Mother (or a prostitute), which are designed to titillate the audience. Or place it alongside the love scenes with the primary couple. When the two leads make love, it’s romantic and sexy. The assaults are just as graphic, but I never felt like I was supposed to be aroused. That is part of the reason why I can almost forgive “Daughter of Darkness” for its transgressions. It crosses many lines, but it does have a certain degree of heart and respect towards its characters- at least the ones we like. In fact, if I enjoyed anything, it’s that the couple have some really good chemistry together. I bought their romance- a rarity in any genre, much less a sleazy exploitation flick- and I wanted them to come out on top. Their plight is so moving that even the detective struggles with cracking perverted one-liners. The comedy, for once, doesn’t effect the tone. The humor didn’t undermine the darker elements. The unsettling moments are just as unsettling as they would be if they cut out all the comedy, but I’d still say the humor is inappropriate. Maybe Hong Kong flicks only do this because they presume their audience doesn’t want their experience to be a total downer, but “Daughter of Darkness” is so bleak and vicious that I don’t see how the attempts to be ‘funny’ will make it any less depressing.

On a technical level, “Daughter of Darkness” never excels beyond your traditional Category III flick. Yes, the acting is good, but oddly that is very commonplace in Cat III. I swear these movies all have the exact same score and the direction is mostly standard, albeit with some inspired ‘symbolic’ moments. The finale is awesome, utilizing the actors facial expressions and the violence very effectively and the final shot is pretty haunting. This is a low budgeted movie, but the production values are acceptable. I never thought “Daughter of Darkness” was so cheap looking that it became distracting, but that’s another trademark of Cat III. I liked “Daughter of Darkness” more than I thought I would because I made an attachment to our doomed couple and cared about what happened to them. The violence is usually portrayed more as tragic, whereas usually it’s done for shock value.. But make no mistake, “Daughter of Darkness” is still misogynistic trash that will offend anyone who isn’t a fan of Category III exploitation. That doesn’t make it bad, but quality means little when compared to outrageous content.

Violence: Er…what do you think? It’s not as violent as other Cat III flicks though.

Nudity: Er, what do you think? Graphic rape, pornographic sex…It doesn’t shy away either female or male nudity.

Overall: “Daughter of Darkness” is only worth watching if you’re a fan of Hong Kong- Category III exploitation. It’s better than most, but not good enough to sway anyone else.