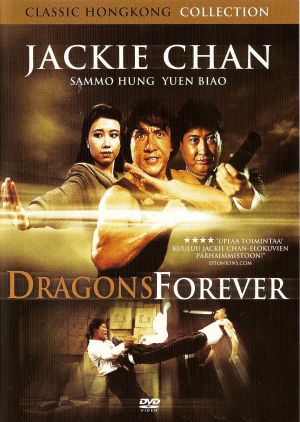 Plot: Jackie Lung (Jackie Chan) is a sleazy lawyer who’s hired by an unethical chemical factory, which keeps dumping chemicals into the fish pond that’s owned by Miss Yip (Deannie Yip). Jackie has to either win the case in court or convince the woman to sell the pond to the factory, who adamantly refuses to do so. She is represented by Nancy (Pauline Yeung), whom Jackie immediately begins to fall for. Eventually he has to hire his old friends Luke Wong (Sammo Hung) and Timothy Tung (Yuen Biao) to help him in his case. But Luke, who is supposed to seduce Miss Yip into selling, starts to fall in love as well. Timothy is supposed to bug her house, but…well, he’s crazy. This ultimately will lead to a collision between all parties involved, and it will be epic.

“Dragons Forever” isn’t for everybody. Perhaps as a testament to this, I’ve felt differently about the movie each time I’ve seen it. My first viewing was probably in the 90’s, when I was a kid who embraced the good in everything, while phasing out the bad. Needless to say, I’m pretty sure I enjoyed every movie ever made during that time period. When I saw it again years later, I was pretty disappointed. All I saw was a sappy melodrama in place of the riveting martial arts movie that I enjoyed. I had been experiencing my moody teenaged years where all I wanted was action and carnage. Now that I’ve seen it again, I notice and acknowledge both sides. It has everything that I loved as a kid, but loathed as a teenager. So as an adult, allow me to say this. “Dragons Forever” has great action and mawkish romance. Liking it comes down to which side grabs you more.

It’s hard to describe the choreography in a Jackie Chan movie without sounding redundant. While the high octane stunts are minimal, there are still a lot of brutal falls that audiences take for granted. But the stunts are only a part of the action and Jackie seems more interested in delivering sharp kung fu sequences. Each fighter has their own style. Sammo has the most power, but is surprisingly athletic. Jackie has the most speed, but is surprisingly powerful. Biao is the most athletic and spends the bulk of the movie doing flips and twirls. Another thing we take for granted about Jackie is how he incorporates the locations into his fights. Whether they’re on a yacht or in a factory, you can bet that these sets will be exploited for the fights scenes. A lot of props are used too, which adds a dash of stylish realism. In reality, if someone is being attacked by a group of people, they probably will hurl whatever they can get their hands on at the attackers. Yet they make this look really cool on-screen, so it adds to the fights. Jackie isn’t doing anything crazy like in “Project A”, but it does look like a lot of stunt men were sent to the hospital. The choreography is tight while never being incomprehensible. Every punch and kick looks like it almost hits and when they do connect, they seem painful. Eventually the trio have their own fight and it works beautifully, even if it’s a little short. It’s cool seeing all of their different styles clash at once. The finale with Bennie the Jet is exciting and it’s one of the few times where an American fighter looks awesome on-screen. Sure, it’s not quite as slick as their fight from “Wheels on Meals“, but it’s still very impressive. 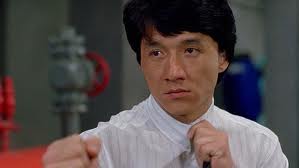 Plenty of wacky hijinks occur during the fights. Sometimes the concepts alone create the comedic suspense. One of the highlights is when Jackie is trying to have dinner with the woman he’s scamming, but both Sammo and Biao (who are hostile towards each other) somehow end up in the house and Jackie is trying to keep them all hidden from each other. This leads to a fight that Jackie tries to keep under control until he can get her out of there. It’s a good fight, but it’s also comical and edgy. There is plenty of mugging and sight gags, but Yuen Baio gets to have the most golden laughs. He’s playing the most amusing character and his twitchy, neurotic mannerisms are hilarious. I was disappointed that the domestic version cut out the bits with his psychiatrist. That pay off was side splitting. In fact, he practically vanishes during the middle block in the domestic cut of the film.

But now let us talk about why I turned my back on this movie during my teenage years. This isn’t one of Jackie’s more action packed movies. Don’t get me wrong, there is a healthy amount of kung fu. But much of the film is dedicated to the love story. It’s pretty shallow and you never really understand where the ‘love’ comes from. It’s implied Sammo’s character has seduced many women before, so I guess I can accept his success with his target. But what caused the change in him? Jackie seems more interested in looks and it’s never established what makes his love interest any different. Nor is it explained why she is attracted to him. The romance becomes so freakishly corny near the end, when Jackie asks her if she really loves him in the middle of court and the judge demands that she answers. It’s pretty stupid, but…but…

As an adult, it kind of charmed me. When you’re a male teenager who demands carnage upon more carnage, a good love story is no different from a bad love story (unless there is nudity). In terms of script, the film’s romance fails. But the actors performances are sincere enough that I began to accept it. It also helps that the characters themselves are surprisingly interesting. The trio of protagonists all have their strengths and weaknesses and once again, while the script fumbles with their development, they all do a stunningly good job at pulling it off. Sammo Hung is more or less reprising his role from “Project A”, but he’s just as enjoyable as always. Jackie Chan gets to play a jerk with a heart of gold and he does it well. It’s really Yuen Baio who steals the show, but he also has the most entertaining character. Hell, even the two women come across as strong and independent compared to previous love interests. Usually they are glaringly bland or insanely irritating.  Plus, the beautiful score just helped things connect. In the end, my criticism somehow managed to turn upon itself and I find myself reluctantly admitting… that… I…cared…*bursts into tears*. IT’S SO BEAUTIFUL! BWAAAAAH!

Nevertheless, I still believe that “Dragons Forever” isn’t for everybody. Many will complain that it’s slow paced or cheesy and they aren’t wrong. You can definitely tell that Jackie and friends were trying to expand their horizons by playing against type and focusing a little more on the drama. But I don’t believe they failed at it and it’s not like they abandoned their kung fu roots either. There is still a fair amount of action and it delivers everything that I want out of a Jackie Chan action movie. The fights are crisp and inspired, the comedy is restrained compared to their louder efforts and the characters (along with their situations) are engaging. This isn’t among any of their best movies, but it is a stellar example of their skills. With that said, if you are unfamiliar with the majority of their works, this might not be the best way to start. If you want to see Jackie, watch either “Little Big Soldier” (his best drama) or “The Legend of Drunken Master” (his best movie). If you want to see Sammo, watch “The Magnificent Butcher” (lead role) or “Yip Man 2” (supporting role). I’m not quite as familiar with Yuen Baio outside of his collaborations with these guys, but he was good in “Dreadnaught” (lead role) and “Once Upon a Time in China” (supporting role). If you want to see the best film they did together, give “Project A” a whirl.

Violence: PG-13. It can be pretty violent at times. Some scenes are flat out brutal.

Overall: “Dragons Forever” is certainly worth watching if you’re into the films of Jackie Chan, Sammo Hung or Yuen Baio. But if you do like watching their films, why have you not seen this?