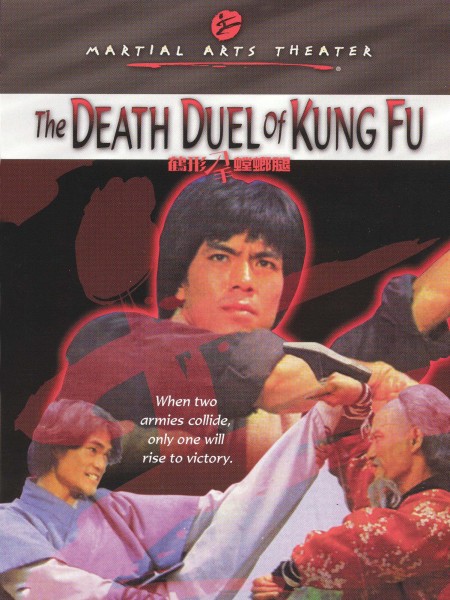 Plot: Hsiung Ting-Kuei (Don Wong Tao) kills a Qing Marshall and plans on joining the exiled Ming Army in Taiwan, but finds himself pursued by To Ko Lan (Eagle Han)- a ruthless martial artist, a mysterious female agent and an even more mysterious warrior named Sun Sen (John Liu)- who claims to be after our hero, even when he’s helping him. Also known as “He xing dao shou tang lang tui“.

“Death Duel of Kung Fu” might be a crappy movie, but it is an excellent kung fu movie…I swear that statement will make sense in time…It’s very rare to see such inept film-making having nasty sex with superb fight choreography, but while you might feel dirty afterwards, you can’t deny that you were turned on to the max! Apparently “Death Duel of Kung Fu“- a title that also mates awful with awesome- was a followup to a flick called “Secret Rivals“, which also boasted Don Wong Tao and John Liu. I have to admit that I’ve never seen that one, although it’s apparently pretty good and was quite successful…although that didn’t stop the producers from continuing to cut corners and film this ‘Chinese’ production in South Korea in order to save money. The budget was obviously minimal, but the film expertly distracts you from this by showing off a pretty terrible transfer…although that presumably was not the original intention. Nevertheless, the ‘ripped from VHS’ transfer was ultimately upstaged by the incompetent direction, insanely terrible editing and laughably bad writing…which were all soundly defeated by cool kung fu action. “Death Duel of Kung Fu” survives its badness because none of it gets in the way of the fight sequences, which are plentiful and shockingly detailed.

I’m not very familiar with Chi Chang, either as a director, writer, choreographer, actor or…Jesus, this guy has done everything…But based on his work as director of “Death Duel of Kung Fu“, he’s a hack. Sorry, maybe his talents lie within his his other film-based careers, but he is not a good director. While there is the occasional beautiful visual- not that attractive scenery provides much of a challenge in the cinematography department, he doesn’t seem to have a good grasp on framing. Two characters back-flip away from each-other which culminates in an empty shot of grass…why? Or what about that long shot where Dong Wong Tao is running in the direction of the camera, only to vanish within the hills while the camera awkwardly lingers until he re-appears again. I also thought that the zooming effect was over-used to the point of becoming distracting, although the editing is the real winner of suckitude. Admittedly some of this might be the shoddy transfer or might even be the fault of the writing or direction, but the lack of continuity was noticeable. At one point, the hero scuffles with a villain, managing to knock him down and vanishing just as his foe regains his bearings. Okay, so he teleports, but I can buy that to an extent. But then it cuts to him trying to get away, only to be intercepted by the same baddie and his partner. So he teleports too? The passage of time just seems odd there, although that might be an overarching flaw as the recovery periods and training montages are also very vague. “Death Duel of Kung Fu” also boasts some of the worst transitions ever. A scene will abruptly end, crudely cut to a black screen that lingers for a full second or two, before moving onto the next scene. That’s pretty shitty work and yet none of this crap really gets in the way of the action sequences, so do these flaws matter? I guess that’s up to you. 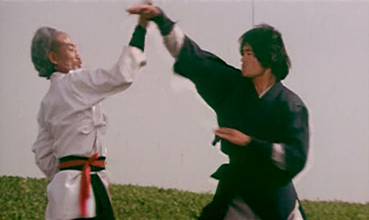 What about the story? Kuang Ni is no stranger to writing kung fu flicks and I’m pretty sure his name appears in every other review I write in regards to this genre, so why is this script so bad? Is inept film-making a disease and Chi Chang was contagious? As of 1979, he already had 10 years of experience- producing many good movies such as the “The Magic Blade“, “The One-Armed Swordsman“, “Heroes of the East“, “The Heroic Ones” and the underrated “Crippled Avengers“- and had penned countless other stories during this time (he has more than 200 credits to his name), but his work here feels more like it can from a misguided, but enthusiastic rookie. “Death Duel of Kung Fu” tries to tell a compelling story, but it really struggles with its characters. The attempts at intrigue usually fall flat because most of the twists are predictable, although one did surprise me because I was busy being distracted by a more obvious reveal. But there were so many moments that left me confused thanks to the crappy characterizations. The Japanese woman shows up along with Sun Sen to rescue the protagonist, so were they together? According to the next scene, apparently not. The Villain lets Sun Sen go after the latter says “I’m after him (the protagonist) too”, but he doesn’t comment on how Sun Sen just defended their apparent target? I still don’t really get Sun Sen’s motivations and I had a more sinister interpretation of the character that I don’t think was intentional. What’s strange is that the Qing fighters aren’t portrayed as villainous, being no more ruthless or cold blooded than the heroes. I love when Hsiung Ting-Kuei criticizes Sun Sen and the antagonist for trying to team up on him, but that doesn’t stop the good guys from teaming up on said antagonist during the finale. If the writing was better, I might believe that this was intentional, showcasing a ‘grey vs grey’ morality war. However, I suspect that this was accidental. Why spend time on the villain recruiting the Captain of the Guard when that character barely seems to play a role in the story? Because the script sucks. But do you know what? It doesn’t matter, as the script has so many holes that the fight scenes are more than happy to fill.

The fight scenes are awesome, having a nice blend of different kinds of battles. Weapons and hand-to-hand, comical and intense, one-on-one and one-against-many, ass kicking chicks, underhanded heroes and honorable villains- “Death Duel of Kung Fu” seems to have everything. There’s a lot of quick, fancy hand work and plenty of dangerous spots that I’m sure left the fighters bloody in outtakes. At times it’s obvious that the camera is being under-cranked, speeding the action up, but usually it added to the credibility of the fighters. The sound effects already sold me on the brutality of the strikes, but the sped up movements convinced me of their speed. I thought it was cool how the styles had distinct flavors, with Don Wong Tao focusing on gouging and jabbing with his fingers and John Liu showing off his kicks. Fanny Wang uses knives and is more practical, while Eagle Han just seems to be the overall best- having an impressive offense, defensive and an arsenal of techniques at his disposal. The timing is phenomenal, with so many near-misses involving complicated techniques, continuously keeping me on the edge of my seat. The choreography is too good for “Death Duel of Kung Fu“, but “Death Duel of Kung Fu” ends up being good because of the choreography. You can rest assured that an exceptional duel of some sort will occur three times around every corner and I often felt like the kung fu outweighs the rest of the content in terms of quantity. Enjoying this movie comes down to your own expectations of it. If you want a legitimately good movie, then I would suggest staying away, as this fails in most departments. But its failures never got in the way of the action, which means that if you want excellent kung fu fights, then said failures are worth enduring. “Death Duel of Kung Fu” might be a crappy movie, but it is an excellent kung fu movie.

Violence: Fairly brutal, but not too vicious.

Nudity: Only implied nudity, nothing explicit.

Overall: “Death Duel of Kung Fu” is only for kung fu enthusiasts who can forgive bad filmmaking. I am and I can.