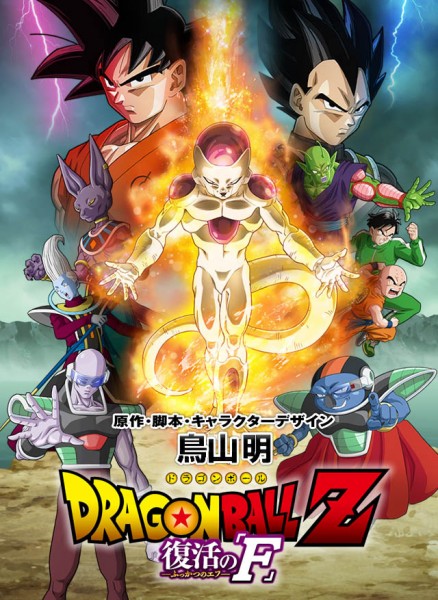 Plot: Intergalactic tyrant Freeza (Chris Ayres; I saw the English Dub) has been revived by the dragon balls and because he’s a prodigy, his power level becomes astronomical after a few months of training. Now he has arrived on Earth, determined to seek vengeance. Can Goku (Sean Schemmel) and his team stop him? Also known as “Doragon bôru Z: Fukkatsu no ‘F“.

The Dragonball Z franchise was resurrected when…sorry this awkward pause, but I had to resist saying something really corny like “The Dragonball Z franchise was resurrected when the fans gathered the Dragon balls and wished it back to life“. That would’ve been really stupid. It appears “Dragonball Z: Battle of Gods” was more successful than anyone anticipated, as not only did it lead to the development of a direct sequel, there is a new TV show called “Dragonball Super” (and a manga spin-off). It is truly great to be a fan right now! My only concern at this point is  a potential burnout from over-exposure, especially as the first two sagas appear to be glorified remakes of “Battle of Gods” and “Resurrection F“. But while rain might come, those dark clouds are either a figment of my imagination or are in the vast distance, so I can be a happy fanboy for now. And happy I was! “Dragonball Z: Resurrection ‘F’” was f@cking awesome, although I have to admit that part of me suspects I’m critiquing the experience more than the actual movie. I saw this in theaters with an energetic crowd and their enthusiasm was contagious. The flick was designed to please fans, but will inevitably confuse everyone else. Under normal circumstances, I’d likely condemn all of the recaping and explaining, but…that’s Dragonball for you! So I am warning all readers that this review is going to be biased, regardless of whether I’m praising the quality of the film or my general viewing experience.

Am I the only one who noticed that Freeza is technically the main character? He’s the underdog who has to catch up and even then, the odds always seem to be stacked against him. I could be wrong, but it felt like he had the most screen-time, because Goku vanishes for large chunks of the story. I’ve always thought Freeza was the best villain in DBZ, so I’m glad that his image was repaired after the anime turned him into a joke. He’s sophisticated, witty, cruel and can balance menace and humor without disrupting the tone. But unlike some villains, he’s not too cool to where you’re sad to see him die. You love to hate him, but you don’t love him. I thought his new Golden Form was intriguing and he gets all the best lines. Goku is still the hero, even though he doesn’t really become prominent until the second half. He’s amusing as always and his chemistry with Vegeta is even more enjoyable than usual thanks to their awesome banter. I loved how Vegeta was utilized and his battle with Freeza was very gratifying. The supporting team consists of Gohan, Krillin, Picollo, Master Roshi, Bulma, Tien, Whis, Beerus and a newcomer named Paco. I don’t really like the direction that Gohan is headed, but everyone gets time to shine. I’m a little confused as to how Roshi can keep up with the others and the power level scale no longer makes any sense, but…that’s Dragonball for you! Two henchman are said to be as strong as Zarbon and Dodoria, but one is able to keep up with Picollo? Huh? I thought the random mooks put up too much of a challenge for the supporting heroes, who should be ‘way beyond their league X 9000’ by now. It only drew attention to the weak reasoning as to why the rest of Earth’s heroes didn’t show up. Whis has become the new teacher for the Super Saiyans and Beerus observes the battle. I find both of them to be hilarious though and they didn’t need to do anything else. Paco was…unnecessary and feels like he is only present in order to plug another manga, but I did find him to be very amusing…So we were cool… Bulma made me laugh quite a bit as well and I’m glad she had a sizable role. I watched the Funimation Dub and the English Voice Actors delivered exceptional performances, particularly when it came to their comedic timing. 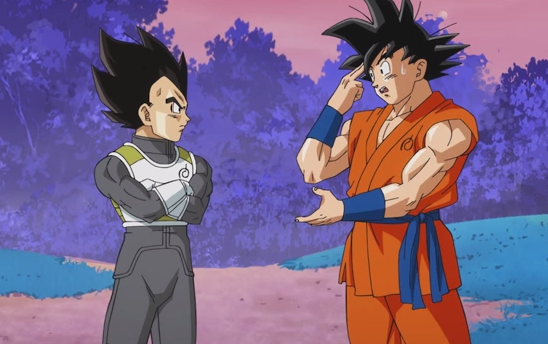 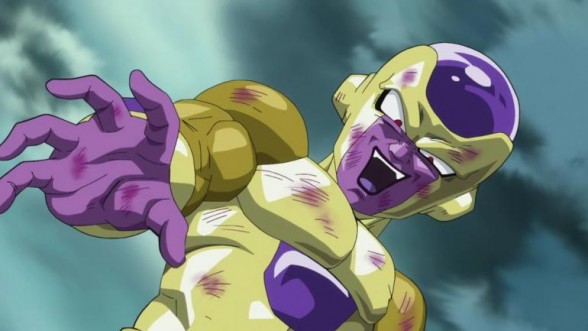 There is no real plot. Freeza wants revenge and attacks Earth. I find it amusing that some of the earlier movies had more in-depth storylines, despite having half of the runningtime. But there are some good character arcs, as the central theme seems to be ‘acknowledging and overcoming your weaknesses’. Freeza, Goku and Vegeta are all being put into situations where their shortcomings threaten to consume them. There is substance to this tale, even if the stakes aren’t very high and the tension is very low. Much like “Battle of Gods“, the characters don’t seem to be taking this threat very seriously and even we know that Freezer doesn’t have a chance. However, the filmmakers seem to be aware of this, because they actually use our expectations against us.  Admittedly this is followed by a safe, copout twist which only serves to cheapen the concept of death within this Universe even more, but…that’s Dragonball for you. The humor isn’t as broad as it was in “Battle of Gods“, but it is very prevalent and I laughed almost every time the movie wanted me too. The Funimation Dub provided lots of funny dialogue, but the sight gags and character reactions alone were enough to satisfy my comedic sensibilities. I especially loved when Goku and Vegeta start fighting each-other in the midst of Goku’s battle with Freeza. The audience surrounding me sometimes would laugh so loud that I’d miss the following line. There’s a lot of fanservice, with references to past events and even non-canon events. I have to imagine that Freeza taking out Gohan with a single punch was a reference to Gohan doing the same in “Fusion Reborn“. On the other hand, if you’re not familiar with the source material then you won’t understand what in the hell is going on- even with all of recap’ing.

The action scenes are just…epic. There’s a lot going on in these large scale battles and every clash felt larger than life. The sound effects took the action to a whole new level, as you feel the impact of every blast and strike. The animation quality is great, delivering surreal visuals, eye popping colors and chilling imagery. The art design is very stylish and the CGI isn’t as distracting this time around, even though it’s not always good. The backgrounds sometimes can look a little crude, but I was never taken out of the movie. In terms of spectacle, I think “Resurrection F” was a step up from its predecessor, both in quality and quantity. The soundtrack is good, if not quite as memorable as the score from “Battle of Gods“. The director did a great job at drawing loud pops from the audience. Goku and Freezer will be fighting and suddenly, Goku would take a punch like a boss and the crowd audibly yelled “OOOOOOH“. His subsequent counter-attack got an even louder reaction, but there are plenty of moments like that which stand out within the battle sequences. I did feel a little exhausted before the end credits began to roll, as the second half is practically one major fight scene. “Resurrection F” was a more satisfying experience for me, but “Battle of Gods” did a better job with pacing. Nevertheless, I think DBZ fans should have a blast with this, especially if you wanted a more action oriented sequel. But seeing this on the big screen, surrounded by a passionate fanbase, is an unforgettable experience. I haven’t had this much fun in the theaters since…well, I saw “Jaws” when it had a theatrical showing a few months ago. When this comes out on DVD, I think I’ll give it another look to see if my final rating holds up, because I’m going to be a little generous.

Violence: PG-13 worthy. People do die. There are some grisly moments.

Overall: “Dragonball Z: Resurrection ‘F’” was an awesome actionime from the perspective of this DBZ fanboy. Try to see this in theaters, if you can.