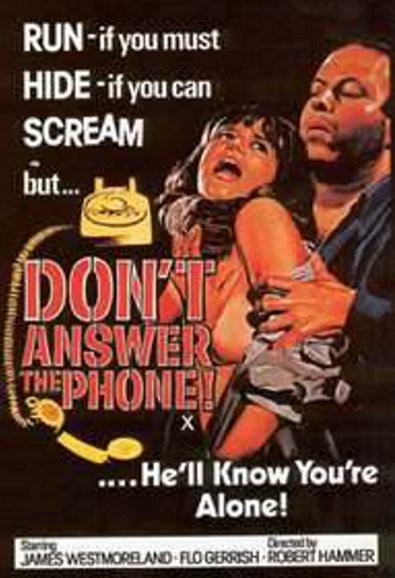 Plot: Two detectives, lead by Lt. McCabe (James Westmoreland), search for a brutal serial killer/rapist (Nicholas Worth). Their murderer strangles women to death and has set his sights on a radio-psychologist, Dr. Gale (Flo Lawrence).

“Don’t Answer The Phone!” is so laughably incompetent that even the title doesn’t make any sense. Does anybody actually ever answer any phones? I suppose that is a little more catchy than “Don’t Answer the Radio Hotline!”, but…actually no, that sounds way cooler than the one we got. I guess the working title, “The Hollywood Strangler” was rejected because it clued the slasher audiences into the ugly truth that they were not about to watch a slasher. “Don’t Answer the Phone!” is a bad movie. It’s a really bad movie, but it’s almost enjoyable in the same way that “Blood Feast” and “Troll 2” are. You just can’t help laughing at it and I suppose some entertainment is better than a bore-fest. But children, remember that the key word is ‘almost’.

One can’t help but wonder if “Don’t Answer the Phone!” was satirizing conventions found within the horror-thriller subgenre, down to the misleading title. Lt. McCabe is your cliched cop-on-the-edge, wanting to break into the killer’s flat, despite the fact that his partner is practically spelling out why it would be a mistake. His response? Pretty much “I don’t care about that legal shit! I want in!”. When a doctor is trying to analyze the killer for the police, he interrupts with “We can’t use any of that psycho-babble”. But my favorite exchange is when he meets this cliched psychologist, who eventually becomes the cliched love interest. For no reason whatsoever, she starts accusing people like the cop for creating deranged maniacs. Psychologists and cops just don’t seem to get along in these kinds of movies, but “Don’t Answer the Phone!” takes this to hilarious levels. I also love how despite being portrayed as a strong willed woman, she is never correct about anything and the cop has to fix everything for her. The cliches are so heavy handed- even with the mortician having a morbid sense of humor- that I toyed with the idea that it might’ve been playfully intentional. 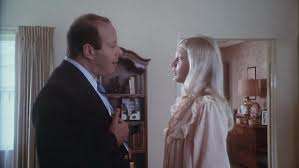 The acting was awful, but once I got used to it, I began to appreciated the nuances of true bad actors. The lead cop is abnormally stiff and his sudden bursts of anger left me gagging. The psychologist actually has some potential, but her character is so aggravating that you don’t really care. But the killer….oh my God, not since Mal Arnold delivered “What about an EGYPTIAN FEAST!?” has shit acting delighted me so much. Actually, Nicholas Worth isn’t THAT over-the-top, but he stole the show with his hammy facial expressions and body language. Hell, just watching him lift weights is never dull because he makes such weird noises. Yet sometimes…sometimes…the guy is kind of frightening. I certainly wouldn’t want to mess with him. So with all of this badness, why isn’t “Don’t Answer the Phone!” the ultimate romp in crap entertainment?

“Don’t Answer the Phone!” isn’t as sleazy as “I Spit on Your Grave” or…any Italian Cannibal film, but it’s also not as chilling either. There’s very little on-screen rape. He pretty much strips his victims, strangles them and presumably (when the camera cuts away) violates their corpses. We only know that sexual assault was involved through the dialogue, which is delivered in typical “Don’t Answer the Phone!”-ish fashion (contrived, silly). A psychic describes a murder in detail and it’s hard not to snicker at its conviction, but even if this scene was meant to be disturbing, it’s followed by a joke (them arresting the psychic because he knows too much). Another golden moment is when a sleazy pornographer is describing a photo he saw (unseen to the audience), where he mentions candles sticking out of every orificie. The exposition is so blatant and unbelievable that it’s hard not to laugh. But the problem is that rape is not funny. 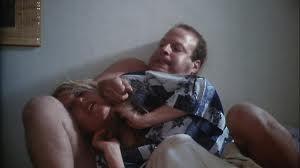 I’m not sure why rape is often treated as a taboo in film, while murder is commonplace. Is it some form of hypocrisy? In the past, it was a cultural belief that it was better to die than to be defiled. Even as a splatter fan, I have to admit that rape scenes turn me off. My theory is that it’s hard to do a disturbing rape scene without accidentally titillating in some way. It’s also difficult to ever feel aroused by that level of violence. In this case, I suppose rape-murder is worse than rape or murder, which makes the bizarre comedy (intentional or not) all the more baffling. “Blood Feast” was mean spirited, but it was too absurd to take seriously. The death scenes present in “Don’t Answer the Phone!” aren’t gory, but there is enough realism to the kills that they almost become unsettling. This could work in the right context, but a slapstick farce is not the right context.

While there are funny parts in “Don’t Answer the Phone!”, it’s mean streak kept it from fully being appreciated as a ‘so bad, it’s good’ laugh-fest. The inept writing, directing and acting meant that I couldn’t enjoy it as a thriller. There were some aspects I appreciated, from the cheesy 80’s music to the one genuine laugh in the entire feature (the bathhouse sequence). But the cruelty doesn’t gel well with any of that. The film is incredibly misogynistic and I don’t just refer to the killer and the violence against women. Women in this movie suck. They need men to do everything for them. Even the signs in the background tend to have some misogynist undertones about them. This could be clever if I felt it was a satire on this genre of film, but one scene singlehandedly discards that possibility. A girl is confessing to her psychiatrist that she was molested by her Father. The killer overhears this, stalks her, breaks into her house and binds her. What is he saying as he prepares to hurt her? He’s referring to himself as her “Daddy”, just before he presumably rapes and kills the poor victim. No movie with a grain of intelligence would ever consider such a hateful scene to be ‘funny’ in any sense of the word. “Don’t Answer the Phone!” sucks. It’s just sometimes amusing for it.

Violence: Rated R worthy. Just strangling, although it can be vicious.

Nudity: Lots of it, but it’s mostly unattractive. Is it a coincidence that the only consensual sex scene is the only one without explicit nudity?

Overall: “Don’t Answer the Phone!” isn’t really worth watching, but it does have a minor cult following.