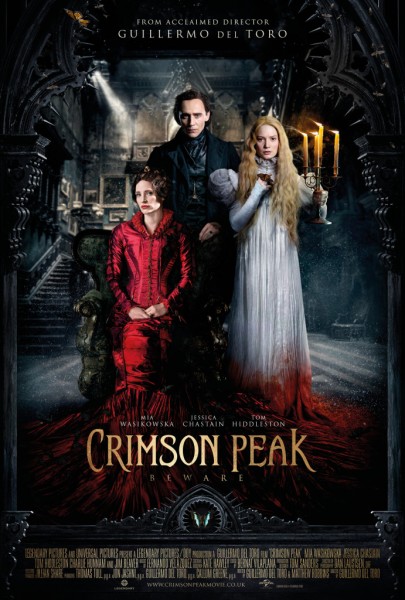 Plot: Edith Cushing (Mia Wasikowska) becomes smitten with the mysterious aristocrat Thomas Sharpe (Tom Hiddleston) and in the wake of a tragic loss, chooses to marry him. They return to his dilapidated mansion with Lucille Sharpe (Jessica Chastain)- Thomas’s aloof and unhinged sister. Everything starts off fine, but Edith begins to see strange visions and it becomes apparent to her that the Sharpe Family has been hiding some dark secrets…secrets which may put her in grave danger…

“Crimson Peak” does such a phenomenal job at being a throwback to vintage horror that it…ends up feeling outdated. I’m still not entirely sure how I feel about this one. Did it make me feel nostalgic? Absolutely. Was it nice to look at? I don’t know, as my eyes were too busy jacking off at the scenery porn to tell me what they thought, but I presume they were happy. Was I ever scared? No, although I guess I’ll concede that there was some suspense and a few creepy moments, even if nothing stood out as exceptionally terrifying. Yet I can’t help but hold this against “Crimson Peak“, as vastly inferior movies managed to crawl under my skin at least once or twice. Was I bored? No, and this is impressive as I was already aware that “Crimson Peak” was more of a ‘gothic romance’ than it was a horror feature. I expected to be yawning, but while the narrative did occasionally drag, I didn’t spend the majority of my viewing experience looking at my watch. Was the script of a higher caliber than most of its ilk? I suppose, but it’s also nowhere near as intelligent as it thinks it is. There is a scene where the heroine justifies the presence of ghosts in her story by claiming that they’re ‘metaphors of the past’. Guess how the paranormal are used here? It’s like Guillermo del Toro is boasting how clever his writing is, which I don’t approve of unless the context is satirical. Amusingly, the protagonists writing of romance is criticized as being overly sentimental among other things, which sums up my opinion of the films love story…and yet…I don’t feel the need to bring my hammer down upon the romance, as the film never treats it as anything more than infatuation that can either blossom into something more or wilt into…er…something less…But really, “Crimson Peak” is just glorified eye candy. Tasty…Tasty…eye candy…Yum…But your eyes will have to brush their teeth afterwards, or they’ll get cavities and always remember to consider their calorie intake. Plus, their can’t eat sweets near bed-time as that’s not good for their body and they might have a sleepless night.

That was a metaphor for me having writers block. Now praise me for my cleverness!

So why does “Crimson Peak” have such a purty mouth? For one, Guillermo del Toro was given plenty of money to work with, so the production values allows him to recreate the Victorian era with exquisite detail. The costumes and sets were stylish and authentic looking. The haunted mansion is breath-taking, being the perfect marriage of grand and sinister. The Gothic corridors are filled with beautiful designs and vibrant colors…that have deteriorated to the point of now looking creepy. The macabre additions, such as dead moths decorating the walls, add another dimension to the visuals. Yet I was also taken aback by the creativity of the set design, as the house is sinking in red clay. So a blood-like substance will occasionally rise from the ground or run down the walls and that is just really cool- and when it merges with the snow, it’s even cooler. The Gothic imagery is bathed in surreal colors that give the film a unique atmosphere, reminding me of classic Argento or Bava. I can only imagine the filmmakers spending hours experimenting with the lighting, just to make sure that the shadows are perfectly in place for the camera. Every shot seems immaculately planned, even when that shot is just of Tom Hiddleston’s naked ass. While I can’t say that “Crimson Peak” is ever scary, it can be eerie, despite relying a lot on ‘CGI ghosts’. I don’t think CGI effects work very well within the horror genre, but the ghosts bizarre and demented appearances did occasionally give me chills. 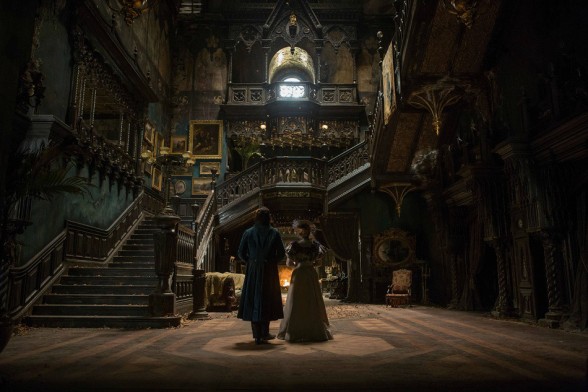 The problem is that at its core, “Crimson Peak” tells a familiar story and doesn’t make any effort to tell it any differently. There wasn’t a single twist that I didn’t predict during the first 15 minutes, although quite frankly, I had already guessed most of them from the trailers. While ghosts occasionally show up, most of the suspense is built around the shady past of the Sharpe siblings (Tom Hiddleston, Jessica Chastain) and the danger that this puts Edith (Mia Wasikowska) in. This Hitchcockian scenario has been used so often that the movie doesn’t even try to keep anything hidden and even when it attempts to throw a curve-ball, the alleged ‘twist’ is so transparent that you wonder why there was even a mystery to begin with. I almost suspect that del Toro knew how predictable his story is, which is why not much effort was put into surprising us. There is a lot of ‘self aware’ dialogue and sometimes you get the impression that he’s deconstructing certain cliches. How many of the Universal monster or Hammer Horror films had people pledge their eternal love for each-other even though they’ve only been acquainted for like 10 minutes? We roll our eyes at Edith wanting to marry Thomas (Hiddleston) a short time after they’ve been introduced, but the film openly criticizes her impulsive choices. I could see why she’d be drawn to Thomas and her naivety in regards to love is practically a major plot point, so these cliche wasn’t a tumor on the narrative. Many probably have criticized the existence of a third wheel, the doctor (Charlie Hunnam) who is also in love with Edith, but this is also a trope found in many of the films that “Crimson Peak” is homaging. Another thing you have to remember is that “Crimson Peak” is paying tribute to horror movies that don’t necessarily fit todays definition of horror. They might’ve contained Gothic elements and scared audiences during their time, yet they often were romances or character understudies. But if del Toro is going to resurrect a dead formula, he should at least try to make it his own by incorporating new concepts and expanding upon older ideas- adding sex and violence is not enough. A 2015 production should not feel like the script was written in the 1960’s, where it still wouldn’t have been considered original.  Moving on- The acting is good…usually…and their lines are good…usually…Some have said the dialogue was tacky, but I expect Victorian writers to say fancy things like “You’re looking towards the past. You won’t find me there“. I thought Hiddleston and Wasikowska had solid chemistry and enjoyed most of their interactions. Jessica Chastain (Lucille) has been praised the most and she’s a lot of fun, although I personally felt she was underused.

Mia Wasikowska is convincing as a strong, somewhat rebellious heroine and she sold me as a woman blindly in love, but I often felt detached from her performance throughout the entire second half of the movie. I was thinking about this for awhile and I realized that she never really seemed very scared or upset. After she hits rock bottom in the story, Wasikowska portrays her as someone who is mildly annoyed instead as someone who has been broken. I know the actress is capable of showing fear, as she acts genuinely afraid during much of the first half, but once she gets used to the paranormal it’s as if she becomes numb to everything. This took me out of the movie because if she didn’t seem particularly worried, why should I worry for her? Furthermore, I wanted more banter between Lucille and Edith, as both characters seemed witty and snarky enough to pull off a war of words. Yet Edith is always demure around Lucille, even though she’s already suspicious of her, so this was a missed opportunity. Both women fighting over Thomas’s soul seemed like it would be a more compelling narrative than the tired ‘is my husband trying to kill me’ plot. But nope! Once Edith arrives at Crimson Peak, she becomes less of a character and more of a prop to drive the story…which isn’t anything special…I can’t call the script bad though. When anyone does something stupid, I always felt their poor decision made sense based on their state of mind. In the end, “Crimson Peak” is an elegantly made movie with an eye popping visual style, flashes of intelligence, a solid cast and a swift enough pace. But the story is playing soft ball on an overused field.

Violence: Rated R. Surprisingly nasty, although I’m not sure if the gore was necessary.

Nudity: There is a (unintentionally amusing) sex scene where you see a male back-side.

Overall: “Crimson Peak” might be wearing a very attractive dress, but it’s only to distract you from how ordinary the wearer is…I’m willing to be distracted, I guess. Are you?