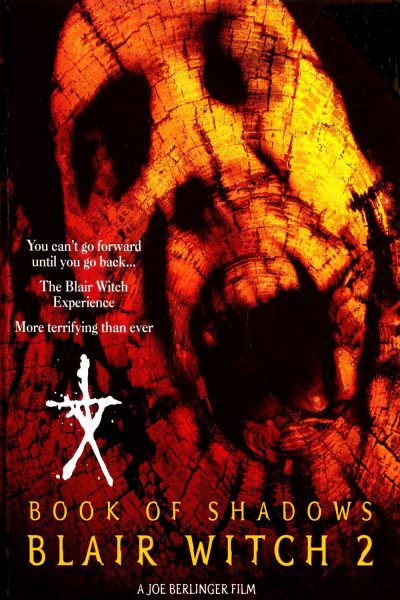 Plot: In this Universe, “The Blair Witch Project” was only a fictional movie and a group of obsessive fans want to tour the filming locations and explore the mythology of the Blair Witch. But then strange things start to happen…

I’m not sure why I watched “Book of Shadows: Blair Witch 2” when it first appeared on VHS, as this was during the period that I loathed “The Blair Witch Project“, but I did and hated it even more than its predecessor. I’ve been both reluctant and a little eager to revisit this infamous sequel though, as it has developed a cult following over the years and I eventually did fall in love with “The Blair Witch Project“, so maybe I can embrace the Book of Shadows-less “Book of Shadows” too? Then again, the bits and pieces of its content that has remained within my memory haven’t aged well, so my expectations remained low while my hopes timidly peeked up at the sky. Unfortunately, this journey ended with a downer ending, as “Book of Shadows: Blair Witch 2” sucked. The sad thing is…I really was hoping this movie would seduce me into doing its evil bidding, because director Joe Berlinger had some very intriguing ideas that almost work.

It’s now common knowledge that Berlinger desired to make a slow burn, psychological thriller that satirizes how the media influences the masses, but Artisan studio was displeased because they wanted a more conventional horror flick, so forced re-shoots and chopped his vision in pieces. But would the original version have been any good? I’m sure it would be the superior cut, but I do believe a lot of the flaws were present from the beginning, as the story is following some of the most unlikable, obnoxious, pretentious pricks to ever grace the screen. I hated every single line that came out of every single one of their mouths and every interaction seemed designed to be as unpleasant as possible. They’re always f@cking yelling at each-other and while you could argue that “The Blair Witch Project” also had this problem, at least that movie mixed in the freakouts with moments of warmth. The characters would stop bickering and bond over their favorite foods, whereas the only times this cast aren’t verbally (and sometimes physically) tearing into each-other is when they are too busy tearing into someone else. Furthermore, “The Blair Witch Project” puts its cast through much more stressful situations that they sometimes made worse, so I could understand why they’d turn on each-other. Why are the “Book of Shadows” characters so angry? Because their equipment and literature was destroyed? Because they can’t remember what they did after a night of drinking and drugs? It can’t be because they’re stuck at the factory, as they could’ve easily called for help. These are lame and boring stakes, whereas “The Blair Witch Project” established that its characters were in peril early on. Eventually strange stuff does occur and this leads to a possible murder, but once again, LEAVE. This stupidity, mixed with their general obnoxious personalities, made me hate everyone. The acting is very uneven, with only Jeffrey Donovan and Kim Director giving steady performances. Everyone else is either too wooden or hammy and in some cases, they can be both. It’s surreal seeing Tristine Skyler and Stephen Barker Turner mumble through their lines so lethargically one scene and give into over-the-top hysterics the next. I think part of the problem is that even though this was released in the year 2000, “Book of Shadows” is still trapped in the 90’s, which favored snarky, self-aware, stereotypical characterizations that look and sound ridiculous by todays’ standards. Now that I think about it, when was the last time anyone has seen a Goth character? They were common in the 90’s though, especially within the horror genre. So I don’t think the studio interference ruined a potential classic, as these issues would’ve infuriated me even if they appeared in a better movie. 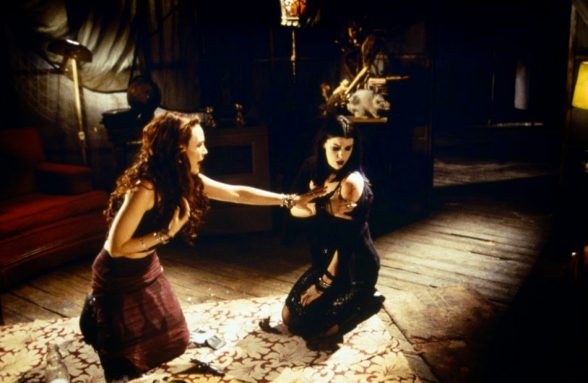 Apparently Berlinger wanted the sequel to have a more humorous tone that gradually becomes darker, with Frank Sinatra’s upbeat “Witchcraft” even playing over the opening credits. The studio completely f@cked this up by replacing “Witchcraft” with a Marilyn Manson song, which makes the movie seem like it’s going to be a hardcore bloodbath, putting the audience is the wrong state of mind. They also inserted random scenes of graphic violence into the bantering, which only made it impossible for me to ease into the films’ style of humor. A major reason why Artisan was unhappy with Berlinger’s cut is he didn’t make a horror movie, so they inserted an entire subplot where a similar group of tourists are murdered. The problem is that this makes the already planned twist ending seem insignificant in comparison, while adding another layer of predictability. They also forced in some random shots of a ghost girl, which I found to be very awkward and hilarious. There are a lot of transparent dream sequences (yawn) and wasted opportunities for suspense. At one point Jeff comes across three ravenous dogs, panics and grabs his gun, but why bother? They’re on the other side of a broken bridge…He’s safe…There isn’t anything scary about “Book of Shadows“, but I don’t think I would’ve criticized the directors’ cut for this, as it wasn’t supposed to belong in the horror genre.  The violent and *snickers* “spooky” inserts are intended to be frightening, changing the genre from a psychological thriller to a horror, so I have to criticize the film for not being scary now. There are moments where the score, direction and cinematography are kind of nice, but the editing tries to make the movie more exciting and flashy, using so many quick cuts that I started to get a headache- not helped by the noisy music. The studio is also responsible for the narrative being told out of order, starting at the present, moving the timeline back a year, cutting back towards the present again and then jumping towards the near future, before returning to present day and the process continues. Just typing that was disorienting, so imagine what the viewing experience was like. There are random scenes of Jeff having flashbacks to his time at the mental institution, presumably to make us wary of him, but they add nothing to the story. In fact, they try to cast suspicion on all of the characters, but was there really a mystery? The flashforwards immediately reveal they are guilty of some crime, everyone is seeing ghostly images (so they’re all either crazy or being haunted) and Tristan is ranting about having Blair Witch related dreams…The foreshadowing is so strong that it almost starts to resemble a red herring…except it’s not…Maybe that’s the real twist. We’re supposed to be surprised because we were expecting the story to throw a curve ball at us, only for it defy our expectations by having the most predictable conclusion imaginable? I’m being facetious, of course, because I’m aware that the original version didn’t reveal so much information so quickly. The studio just assumed we wouldn’t have any patience for a methodical unraveling. So the editing really screwed up the narrative, giving us little incentive to be invested in what is going on, because we already know where it’s going within the first 10 minutes. Artisan obviously wanted a more fast paced affair…which is ironic considering what “Book of Shadows” was a sequel too, but Berlinger’s story was designed to be slow paced. Sprinkling parts of the ending throughout the movie, besides spoiling the alleged twist, is not going to add anymore excitement. If anything, the opposite occurred, as I was bored.

Is there anything positive I can say about “Book of Shadows“? Even though I have to admit that I missed most of the subliminal messages and imagery during both viewings, I really do like the ESREVER gimmick. There are a lot of hidden Easter Eggs, such as tools being covered in blood, various stick men littered about and even a Rustin Parr cameo, so at least there was attention to detail. Occasionally the directors’ vision does shine through, although this also draws attention to how badly disfigured the studio left the project. I like the idea of focus on group delusions and our turbulent relationship with the media, even though these concepts were hacked up too. When I first saw this on VHS, I didn’t really get the connection to “The Blair Witch Project“, ignoring the meta prologue. But now I do understand what it was trying to do and as a spiritual sequel, I can accept it…A bad spiritual sequel, but at least I can comprehend the filmmakers’ intentions. I still found “Book of Shadows: Blair Witch 2” to be a boring, disjointed, frustrating mess. It’s easy to condemn Artisan for their tampering, but I also feel like Berlinger deserves some of the blame. The studio made it obvious that they were eager to cash in on the success of the first film, even setting a release date before he was attached. They were clearly not interested in producing art at the risk of losing money, so why did he think they would allow him to experiment with a much different kind of sequel? Granted, Artisan should’ve been paying closer attention to what he was doing from the beginning, but “Book of Shadows: Blair Witch 2” was brewing up a recipe for disaster from its conception. So why has this developed a cult following over the years? I think fans respect its ambitions, especially considering how we’re used to sequels imitating the originals, particularly when they’re produced as quickly as this one was. At the absolute least, this is a unique sequel that is taking some artistic risks, so even I kind of respect it (even if I don’t like it). I do hope a directors’ cut comes out one day, as it sounds a lot more interesting. But for now, we’re all stuck with a really shitty movie.

Overall: “Book of Shadows: Blair Witch 2” sucks, although it has a few points of interest.