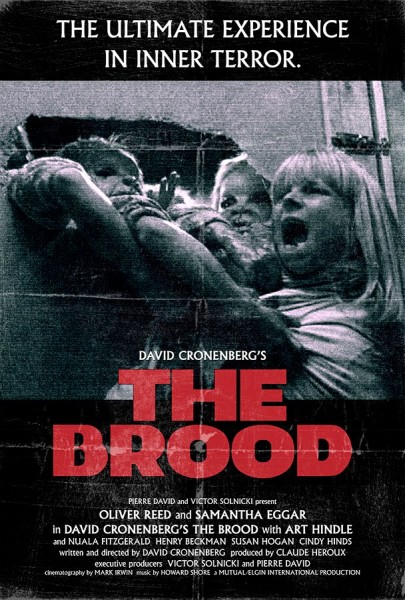 Plot: Dr. Raglan (Oliver Reed) is using a new, experimental, psychological therapy technique on Nola (Samantha Eggar), who suffered a mental breakdown during the middle of her divorce from Frank (Art Hindle). The treatment involves creating a physical manifestation from emotional trauma, but it seems to be going too well with Nola, as…something…is targeting those who have wronged her.

“The Brood” is an…odd kind of movie, as it fits my definition of ‘good’ and potentially even achieved greatness, but it’s not for everyone…or maybe even for anyone. It’s too slow paced for horror fanatics who only want carnage, too grotesque for high brow critics, too unintentionally goofy for modern day audiences, too grisly to enjoy ironically, not David Cronenberg-ish enough for his fans and too David Cronenberg-ish for everyone else. Is it strange that this bizarre blend of alienating factors appealed to me? It was as if all of these potential shortcomings had chemistry together and seduced my tastes into accepting them. And yet…something was missing. I found myself questioning the strength of the narrative, as there were subplots and scenes that could’ve been omitted. But as I was sharpening my claws, I began questioning my own critical abilities. I suddenly realized that said subplots and scenes DID serve a purpose and in many ways were pivotal to the story. Perhaps “The Brood” wasn’t doing anything wrong and it was just too smart for me? The possibility troubles me, as even though I am the guy who openly expresses his love for movies which involves “Fire Breathing, mutant, killer, zombie sushi” or “Dolph Lundgren and Killer Robots uniting to face an undead army” and of course “mad scientist seeks to destroy humanity by causing all women to give birth to dinosaurs“, I do believe I have a solid grasp on what works or fails in a narrative. Maybe this review will help me sort out my feelings or maybe I don’t need to gouge the greatness level of “The Brood“, because this is a David Cronenberg flick and most are too unconventional to sum up as ‘good’ or ‘great’. They are complicated experiences, at the absolute least.

Too Slow for Horror Fanatics: “The Brood” is actually more of a drama than it is horror. There are three attacks before the finale, with the rest being based around the characters and their troubled relationships. If you can’t make an attachment to them, expect to be bored out of your minds. I personally liked the characters and I love how none of them can be described as ‘good’ or ‘evil’. Frank (Art Hindle) might be the most sympathetic, but he’s also shown to be detached, rude and unnecessarily hostile at times. Yet it’s never taken to the extent where I rejected the character. Nola (Samantha Eggar) is a disturbed and unstable woman, but she’s also very pitiful due to a troubled childhood and a failure to connect with her Family. Her parents were apparently abusive, but you get the impression that they are remorseful. Dr. Raglan (Oliver Reed) is the most compelling character because you aren’t entirely sure whether he’s a protagonist or antagonist. There are many different ways to view his actions, which adds to the drama. Everyone in this movie wants to do the right thing, but that doesn’t mean they are doing the right things and we- as the audience- aren’t sure what to make out of this entire mess that is their lives. I thought “The Brood” was thought provoking for this reason and was able to overlook that on the surface, very little seems to be happening.

Too Grotesque for High Brow Critics: As expected from Cronenberg, there is a significant amount of body horror to be found. Admittedly you’ll have to wait until the third act, but the f@cked up imagery is nauseating. Don’t expect a lot of conventional gore, but expect some very disturbing sights that will possibly repulse you. There is a reason why “The Brood” was dismissed by critics as ‘trash’, despite being more character driven- something they’d usually appreciate. The special effects involved in these scenes are fantastic and are creatively gruesome enough to stay within your memory. The shocking thing is…this is still one of Cronenberg’s more restrained ‘body horror’ spectacles. That in itself is kind of scary…

Too Unintentionally Goofy for Modern Day Audiences: I wouldn’t call “The Brood” scary, but I would say it was very ballsy in its presentation. Most of the attacks take place during the daytime, during sequences where you’ve likely dropped your guard. The camerawork is surprisingly sophisticated for the time and budget, while the score is also heavier than most of Cronenberg’s other flicks. This is a pretty suspenseful and often grisly movie, but I can also see many viewers deriding it as silly…After all, you are watching murderous dwarfs with monstrous faces beat people to death with what looks like a rubber hammer. Many people might laugh at the sight of a woman licking the blood off of a Dwarf. Audiences change with the times and there will be some viewers who won’t be able to take a lot of this seriously. I did, but I understand why others wouldn’t.

Not David Cronenberg-ish enough for his Fans: While the body horror is there, it’s not as prevalent as Cronenberg’s other works. The imagery still ties into the theme of the story though, which is what gives his movies some substance. However, “The Brood” isn’t quite as…cold (?) as his other films. His usual protagonists tend to be lacking in personalities and are practically impotent when it comes to advancing the story. But the characters within “The Brood” showed a lot more emotion. I really liked the performances as everyone is expressive and distinct. I can’t say anyone was particularly subtle, but they were engaging. Cronenberg said that his films are often shown from the POV of the disease, which is why his works are often so cold and clinical from a human perspective. This time the disease is repressed emotion though, so it happens to align with something we can relate too. I loved this aspect, as the drama was more profound and moving than the majority of Cronenberg’s other flicks.

Too David Cronenberg-ish for everyone else: I think this might be where a conflict between myself and the movie arrived, as Cronenberg prefers telling stories through visuals. I kept thinking “Why did they need this subplot involving an angry past patient of Raglan?” and then it occurred to me that it showed the negative effects of his treatment. It’s actually a very effective example of foreshadowing, but my brain arrived to this conclusion after the end credits had rolled. The daughters repressed memory was also a subplot that wasn’t properly resolved, but once again, tied into the theme of the story. I found it odd how the protagonist spends the majority of his screen-time investigating the wrong story, although it eventually falls in line with the rest of the plot so he can play a pivotal role in the finale. You’ll spend a lot of time wondering where it will go, unless you read any of the plot descriptions- which technically spoil the reveal. You can appreciate this mysteriousness, or you’ll find the narrative to be plodding and directionless. But this isn’t anything new for David Cronenberg fans. Maybe the film should have clarified certain things…or maybe I gotta stop watching Michael Bay movies…But all of these elements and quirks just worked for me. I thought “The Brood” was a very interesting experience and it’s one of my personal favorite Cronenberg flicks because of all the raw emotion. Yet it also grossed me out too and that is always a good thing.

Violence: Rated R. Not as graphic as his other films, but even tame Cronenberg is usually gross.

Nudity: Some, even kids get naked.

Overall: “The Brood” is an odd and compelling drama with a heavy dose of body horror, but it’s not for everyone.