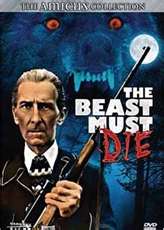 Plot: Tom (Calvin Lockhart) is a wealthy, arrogant, Big Game Hunter who has set his sights on his greatest target yet: A werewolf! He invites a bunch of seemingly random strangers to his estate, but then traps them there. He believes one of them is the werewolf and he’s intent on killing it.

The tragic thing about “The Beast Must Die” is if it had more money at its disposal, it could’ve been a very good movie. The concept alone gives me tingles! It’s pretty much “10 Little Indians” (or “And Then There Were Done”), but with a freaking werewolf. Granted, this strangely isn’t the first time I’ve seen that combination (“Howling V”), but it’s one I probably will never get tired of. But the film also has touches of blaxsploitation (Tom is black, but the music is a bigger indicator) and a dash of camp. The “guess who the werewolf is” gimmick left me howling (no pun intended) with laughter. Yet this mix-up of awesomeness is matched with actual talent, both behind and in front of the camera. I mean, Peter “Dr. Frankenstein” Cushing and Michael “Dumbledore” Gambon? SWEET! Creative direction? EPIC! No money? SHIT!

While the 1970’s wasn’t the best decade for old school horror like this, at least movies could still afford respectable casts. I recognized just about everyone by face, if not by name and there isn’t really a weak link among them. Well, Ciaran Madden (Davina) has quite a few ‘off’ moments, but she isn’t bad enough to take away the thunder from veterans like Peter Cushing (Dr. Lundgren), Michael Gambon (Jan) and Anton Diffring (Pavel). But this was Calvin Lockhart’s movie, so how does he do? The only film that I can remember seeing him in was “Predator 2“, where he played the Drug Lord with a sword. He was pretty bad, so I was shocked at how much I liked him here. Is his delivery a bit stiff and over dramatic? Sure. In fact, it feels like it was designed more for the stage, but it WORKS. The man has a magnetic personality, gallons of charm and lots of charisma. Even when the movie is criticizing his character, it’s easy to love the guy. In fact, Calvin Lockhart single-handedly added half a star to my overall rating, being responsible for a large chunk of the films success. The dialogue is also surprisingly decent in a ‘silly horror’ movie kind of way, but the actors make it sound much better than it really is. 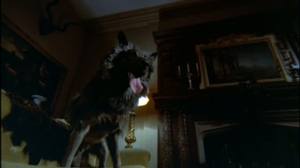 Writer Michael Winder and Director Paul Annett do a good job at keeping the story interesting. You can see one major twist coming a mile away, but it was followed by a reveal that I honestly wasn’t expecting. The funny part about the shocker is that it is obvious in retrospect, but I was so into it, I didn’t really care. The interactions were always compelling so even when the werewolf wasn’t striking, I was totally invested into what was going on. The script isn’t perfect. In fact, Tom’s reasoning is veeeery faulty. He invites a group of guests who have had mysterious and deadly pasts, so automatically presumes one of them is a werewolf? How did he make that leap? Beyond that awkward set up though, the script is pretty good and I liked how the director at least tried to build suspense. Sometimes the scenes just have a nice flow about them, such as when a classical piano suite is playing in the background. It gives the movie a classy feeling. I also liked the use of shadows. All of this buildup is pretty good, although the score isn’t “scary” enough. So all that’s left is the pay-off. When we finally see the werewolf, much to our horror, the beast IS A…dog?!

I don’t even think they bothered to make the dog look remotely like anything else but a F@cking dog! Yes, they apparently had no money for an actual werewolf, so they just got a black German shepherd and that is our monster. They should’ve just called it…weredog. This made the film unintentionally amusing for the wrong reasons. I’m cool with the campiness, but it ended up making the attack sequences- which should be the best scenes- the least interesting parts of the entire movie. Ugh, if only the studio threw some more cash at the production. I wasn’t expecting “The Howling” in terms of special effects, but I was hoping for something along the lines of “Curse of the Werewolf”. Hell, I would’ve been okay with “Howling 2”. But nope, it’s just a dog, even though one transformation scene was…okay. This kept the film from reaching its full potential. For many viewers, it possibly sunk the entire experience! 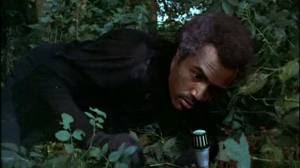 But “The Beast Must Die” is an endearing film if you know what to expect. I liked the cast and am still stunned how Lockhart stole the show from actors like Peter Cushing. The story was interesting and the director made the best of what he could with no money. It’s sometimes silly, but in a good way. The script could’ve used a touch-up where Tom’s theories would actually make sense, but more importantly, this film needed a better werewolf. This is what makes the film so tragic. It had the capabilities to be an entertaining movie, but it lacked the money. Still, I liked it anyway.

Violence: Rated R…I guess. It’s nothing too gruesome, but there is some gore.

Overall: “The Beast Must Die” is worth watching if it sounds like something you would like. You really have to consider what has been said.