Plot: In an alternate history where futuristic technology is introduced in the 1500’s, a group of ninja will attempt to slay the immortal ninja killer. Also known as “Kuro no Shishi“.

I’m not really sure if I should be reviewing this anime, as it is technically an OVA (Original Video Animation) and not a movie, clocking in at 45 minutes. I had forgotten how short “Black Lion” was, but I happened to own the VHS…for some reason…and figured I’d might as well get my moneys worth before I actually got money from selling it. There was a brief period in my life when I obsessed over ADV films- particularly “Neon Genesis Evangelion“- and I remembered seeing the trailer for “Black Lion“. It looked so badass and when I saw it in my nearby shopping mall, I immediately went into purchasing mode. I was then pierced by the blade of disappointment, primarily because I spent the entire 45 minutes trying to figure out what in the hell was going on, when I should’ve just made sweet love with its madness and shock factor. “Black Lion” seems to have been intended to be a pilot for some sort of series, as it doesn’t explain anything, but the ending promises that all will be revealed in ‘time’…except that ‘in time’ never happened. Yet the only reason anyone should be watching this is for the gore and unintentional hilarity- and “Black Lion” gives us lots of both.

Apparently “Black Lion” is based off a manga by Go Nagai (“Devilman“), but outside of a general reference, I haven’t heard much about it. Maybe if you read the comic, you might be able to make sense of this awkwardly developed storyline. “Black Lion” seems to be missing its first act, not giving us any information on the setting or characters and just fires off an action scene at the audience. Even though this takes place during the era of Oda Nobunaga, there are robotic samurai, giant laser cannons and all sorts of crazy shit that certainly did not exist back then. This leads to some hilarious moments later on when a character points out “Nobunaga has access to technology that’s not supposed to exist yet“…as he himself is typing on a computer. Ironically, when we finally get an exposition dump, it seems oddly superfluous. Since Nobunaga barely has any screen-time, they should’ve focused more on explaining the invincibility of Ginnai. Instead, the only information we get is that something- possibly aliens- are backing/possessing Nobunaga. Did they make him so smart that he discovered how to invent this stuff? Did they loan him the technology? Who knows! The answer is probably ‘dude gets sliced in two’. The characters never have any time to develop any personalities, although there are hints that Shishimaru (Yasunori Matsumoto) has gone through a character arc…for some reason. For the most part, he’s just hot blooded and passionate…and he is the most fleshed out character. Ginnai (Yusaku Yara) might have a tragic past, but he’s just rage incarnate throughout the majority of his screentime. No one else is worth remembering, as they are stock characters.  When they die, we’re supposed to feel sad or horrified, but it’s hard to do so when they’ve had two on-screen scenes prior to their ending…If they’re so lucky to even have that much. The ending is vague and unsatisfying, but I guess that’s a fitting resolution to such a cryptic storyline. It’s implied that there is some alien war and humanity is caught in the middle, which would explain the crazy technologies, but why does that have to be ambiguous? THAT SHOULD BE THE DAMN SELLING POINT! This would be the equivalent of “Dragonball” not explaining what the titular balls do while the characters search for them, or “Sword Art Online” never clarifying that the setting is inside a video game. This is bad screen-writing at its purest, regardless of whether I’m supposed to look at this as a pilot, movie, adaptation, etc.  “Black Lion” is a horrible pilot because instead of intriguing its audience, it confuses them. 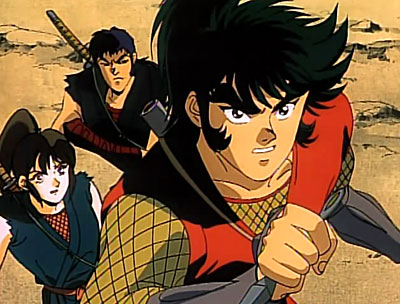 The animation quality is stiff, relying on corner cutting tactics in order to function. The battle animation either looks oddly slow or they’ll speed up a characters movements while their victims freeze. The backgrounds are crudely drawn, the mouth flaps don’t match even the Japanese version and the looping can be pretty hilarious. Yet I have to admit that I like this old school 90’s style of animation as there is something raw about it. “Black Lion” might not provide the smoothest of visuals, but at least it sucks in a style that I am comfortable with. The character designs are strange as the important people do look pretty cool, being reminiscent of Nagai’s other works. The extras, on the other hand, appear strangely cartoonish, as if they wandered from a sillier anime into this nightmare fuel hell. Yet “Black Lion” wears an effective, dread filled atmosphere as its armor, which helps protect the movie from the blows of bad animation. The visual style is very bleak thanks to the color pallet and the gore is pretty disturbing- but in a way that can be amusing as well. People get sliced in half, their heads crushed, blown to bits and their insides seem to be made of mud. The violence is simultaneously repulsive and awesome. The action does start to get more exciting as the strategies become more important, so I was interested in seeing how they’d finally topple their immortal antagonist. The second fight between Shishimaru and Ginnai was my favorite part, probably because it looks like that’s where the majority of the funds went. The action wasn’t as choppy, both characters moved swiftly within the same frame and the ninja techniques were really cool. There is a reason why this scene is beloved by all the trailers. “Black Lion” is really creative in regards to the spectacle on display, boasting lots of crazy ideas. Ginnai starts to shoot missiles out of his mouth, while his head detaches in order to breathe fire. You might be thinking “Huh?” while beholding such insanity, but you’ll be smiling whenever something wild happens. I certainly was.

“Black Lion” is madness, cramming in so many bizarre ideas within 45 minutes of screen-time, but not really knowing how to use them. Those giant lasers and robotic samurai appear in the beginning, but are never seen again. As you watch the OVA, you will feel like you’re missing out on the context- like there is a TV show you’d need to watch in order to ‘get it’, but there isn’t any. The writing is just that bad. On a technical level, the animation is rough, although it does fit in nicely with the atmosphere and violence. The dialogue is awful, being sure to have those anime cliches which always bother me. Why do anime characters cry out peoples names for no reason? The Voice acting (Subbed) is okay, but it’s not like they can do anything with these lines. Exposition is blunt, but won’t leave you feeling any less confused. The characters are shallow and their personalities are inconsistent. But “Black Lion” was clearly trying to sell itself using graphic violence and a crazy setting and…the violence is certainly graphic and the setting is certainly crazy. This is a bad OVA…a really bad OVA, but it’s so batshit insane that I can’t bring myself to feel hatred towards it. If your *insert media here* isn’t going to leave a good impression, then you might as well make sure it leaves a memorable one. But I’ll also remember “Ninja Scroll“- which marketed itself to the same audience…and that’s a much better work of fiction. So only bother with “Black Lion” if you happen to cross its path, but be prepared to draw your sword for combat.

Overall: “Black Lion: Fear the Black Lion” fails miserably in the storytelling department, but offers enough gore and madness to be almost worth watching…almost…