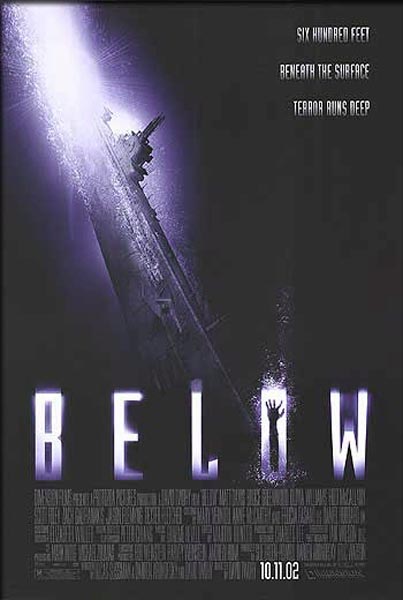 Plot: Set during World War 2 on a Submarine, strange occurrences plague the rattled crew as they desperately evade an enemy ship. Are they being haunted?

The War-Horror hybrid saga continues with “Below”, although I suppose I am technically retracing my steps as I’ve actually seen this before. The idea of a horror movie using a submarine as its setting was enough to give me chills even back in 2002, when I only wanted carnage and blood. It’s almost a surprise that this concept had not been used before, as submarines are already scary without the ghosts. I mean, think about it. Submarines aren’t THAT big and are pretty crowded, which already is enough to make the stomachs of claustrophobic people -like me- turn inside out. To make matters worse, you’re submerged in the middle of the Ocean. If that’s not bad enough, you also have to contend with an enemy ship constantly on your trail. So you can’t take any breaks on the surface, the damage sustained has left the vessel in dire need of repairs and the possibility of death remains high. Then add ghosts, who have rendered the controls useless and now the sub is moving as if it has a mind of its own. For me, that’s practically an overkill of horror. “Below” was a thoroughly enjoyable ride that gave me plenty of shivers, but strangely, my least favorite aspect was what drew me to the project in the first place.

“Below” begins as a submarine-thriller, focusing more on the cat-and-mouse games with the German ship. The warship is equipped to deal with submarines, so lashes out at them with hooks and depth charges. The poor crew never seems to get a break, because whenever they aren’t being attacked, they have to repair the submarine under dangerous conditions. There are enough breaks in the action so the film doesn’t run out of steam, but something always seems to be happening to them during the first half. It’s not really a “horror” at this point, but is just playing out as a suspenseful war film that never leaves the confines of the submarine. While it’s rather conventional, offering nothing that we haven’t seen before (including its characters, who are mostly types), I thought it was exciting due to the crisp direction and tight pacing. The ghost element is introduced when a record player suddenly turns on, while the submarine is trying to remain silent in order to trick the attacking ship. A practical red herring provides a plausible explanation for this, but then strange events start happening. The record player starts up again under mysterious circumstances, characters start hearing voices and noises. To me, the creepiest moments came from the more ambiguous sequences. I liked the low key chills because it played with the idea that the characters might just be going crazy over the tension. Sadly, “Below” fails whenever a more overt, supernatural presence made itself known. Every once in awhile, a ghastly sight will appear in a reflection and it felt more silly and scary. The movie worked when it was building dread, not when it was delivering jump scares. 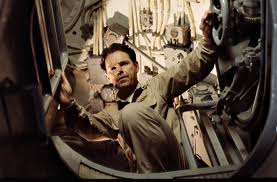 During the third act, an incident occurs that drastically changes the location. The interiors of the sub dawn a more menacing hue, making the setting seem more at home within the horror genre. The director goes all out in milking the spooky corridors and shadowy lighting too, providing lots of atmosphere. The plot starts to come together neatly and we come to learn ‘why’ everything went down the way it did. While I wouldn’t call the revelations ‘shocking’, the build up does play with the conventions. “Who” the protagonist is has become unclear and it’s a question of how everything is going to play out. “Below” actually benefits from its lack of character development in that you aren’t sure who is going to live or die. Doom seems to linger over everyone, but never to the point of becoming cynical. These days, where downer endings have become cliched, the suspense would be minimal because the cast would be more akin to props than characters. They’d just be there to die. Here, everyone is played by respectable character actors who breathe life into their roles, making them interesting. Because I cared enough about their plight and wasn’t sure who would survive, I was invested.

When “Below” was released, it was a financial bomb and the reviews tended to lean towards underwhelming. The general consensus was that it was okay, but fell victim to being a conventional ghost and submarine film. Personally, I think that’s a little harsh, but one does wish the film would’ve been a little daring. I mean, Darren Aronofsky (“Black Swan”) has made a career of making unconventional genre pieces. But then again, he was a nobody back then while director Twohy was hot off the success of “Pitch Black”. I’m not a big fan of Twohy. His output generally caters towards competent, mediocrity (especially “The Chronicles of Riddick“), but “Below” is more carefully crafted than his other works. In the end, I liked “Below”, even if it played it safe in some areas. What threw me off, however, is that I appreciated it more as a submarine thriller than as a ghost story, despite the fact that is what drew me into the feature to begin with. As the former, it succeeded with its white knuckled intensity. As the latter, it lacked bite and just felt tacked on. In my opinion, the movie could’ve achieved greatness if the apparition remained ambiguous. The more they showed of it, the less scary it was. But at least it didn’t sink the film (pun intended). “Below” usually worked its magic on me and is probably one of the better entries that I’ve viewed in the War-Horror saga. I’d probably say it is in the same league as “R-Point“. It’s not as frightening, but isn’t as obnoxious either.

Violence: Rated R. It’s not gory, but a few nasty moments stand out.

Nudity: Some sex oriented dialogue, but nothing explicit.

Overall: I’d say “Below” is worth watching if you like classical suspense, but expect a good movie. Not a great one.