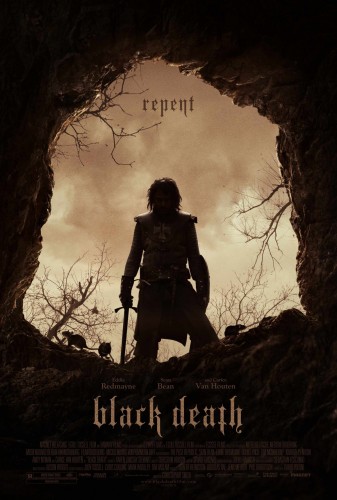 Plot: Osmund (Eddie Redmayne) is a young, devout monk trying to survive the black plague during 1348 A.D. He prays for God to use him as he sees fit and the next day, a Knight named Ulric (Sean Bean) arrives at his monastery, speaking of an alleged village that hasn’t been touched by the plague. He wishes to either confirm or dispel the claim and asks for a guide. Osmund sees this as Gods answer so agrees to go. However, it turns out that Ulric mislead him. According to rumor, the village is actually a haven for witchcraft, necromancy and murder. It also seems possible that they started the black death. But is it true? Are they really sorcerers? Or are they innocent villagers who are about to be slaughtered by bloodthirsty knights?

“Black Death” is not an easy movie to review and I’ve spent three days trying to write it. What is the movies secret? I think the first snag is that the film doesn’t belong to a single genre. It genre-bends adventure, drama, action, thriller and is shot like a horror film. To add to my complications, “Black Death” caters to both the critics and the general masses, which is tricky to pull off. It’s no surprise that some viewers have dismissed it as artsy and slow while some critics damned it to the pits of hell for being a popcorn feature under the guise of ‘art’. I think the primary truth about “Black Death” is that you can’t write a full review without making it sound too mainstream or art-house. Nor is it easy to discuss without ruining the surprise. But I’m going to try!

The first thing one notices about “Black Death” is how all of the characters are shrouded in mystery. At first glance, Osmund looks like a pious monk. But when we see his interactions with his ‘friend’ Averill (Kimberly Nixon), they act much more like lovers than friends. When he begins his journey, we learn that he’s surprisingly down to earth, considering the time. He detests violence in God’s name, but the bulk of the movie is building up to either his faith shattering or being rebuilt. We really don’t know where it’s going. His fellow Christians appear to be thugs at first glance and perhaps that is the best way to describe them. But the more we see of them and learn about them, the more we realize that they are human, even if they made some very wrong choices. Ulric is especially fascinating as you aren’t sure whether or not he’s going to be a protagonist or an antagonist. One scene has him rescuing a woman who is about to be burned alive at the stake, only to quickly kill her himself. He justifies his actions by saying she would’ve died much more horrifically at the hands of the villagers. Ulrics counterpart is Langiva (Carice Van Houten), a pagan whom we aren’t sure about either. Is she a witch or just a chemist? Is she just a woman who wants to protect the village or is she exploiting it? Is it her or Ulric whom we shall take sides against? Throughout the bulk of the movie, it’s ambiguous. 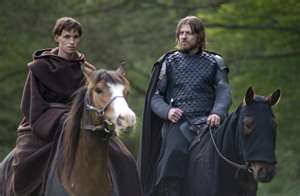 In fact, the entire movie is shrouded in mystery. Does God exist? If he does, is he evil? If Langiva is a witch, than did she cause the plague? Or is she protecting the village from a plague? Is the village just lucky? Or is the plague the cause of the Christians and their violence towards non-believers? As soon as they enter the village, they are greeted with a warm welcome by their inhabitants. But they are clearly hiding something, giving plenty of suspicious or knowing glances.There’s never any real concrete answers, instead only offering some speculation. Those aren’t even the bigger questions, which I won’t spoil for you. But it’s a film that keeps you guessing until the end. I obviously love that about it.

Christopher Smith’s direction is pretty straight forward. Often, it’s surprisingly clinical, allowing the events or scenery to speak for itself. Other times he shows off some breathtaking visuals or will drench everything in eerie fog. The chilling score (which sounds like cultish, Monk chants) and dilapidated sets in themselves provide the right amount of dread. Yet the suspense tends to come from the script, continuously relying on a sense of unease. There aren’t any real jump scares, nor any sequence that is truly frightening. Instead, it’s the ominous looks that the villagers give the knights that gives us goosebumps. The action scenes (there are a few) are crisp and brutal, with the violence being harsh but never sleazy. It was a well directed film where the direction never got in the way of its script. 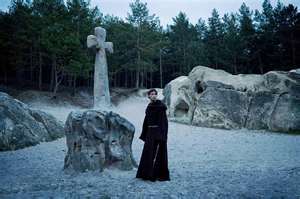 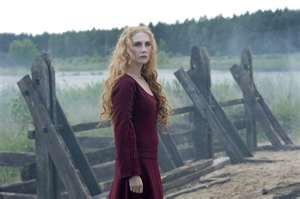 The acting is strong all around, with Bean being perfectly cast as the Knight with a vendetta. Yet Redmayne deserves a lot of credit for delivering an introspective performance, relying more on his facial expressions than actual dialogue. The supporting cast is great too, looking rough and fierce, but also remembering to ‘act’. This is my only issue with the movie though. I have no objective qualms about it but I did notice some missed opportunities. I do wish that the supporting cast had more to do, but I can’t really complain because it wasn’t their story. Also, I kept imagining what “Black Death” would be like if it had been directed like “Valhalla Rising” was. Imagine that hellish lighting thrown in here. Now that would be awesome.

But “Black Death” will be seen as a ‘poser-Ingmar Bergman’ movie that tries too hard to appeal to the masses or as a popcorn flick which collapses under its own pompousness and self importance. Personally, I liked its ambitions and thought it executed them pretty well. I liked pondering about its themes while at the same time, I could enjoy the film as an edgy, period piece thriller. It might not be as memorable as the original “The Wicker Man”, nor is it necessarily as intelligent. But unlike most movies that try this, I was never bored. I was always captivated by the story, characters and the world they existed in. Say what you will about “Black Death”, but it is certainly not a conventional movie.

Note: It shall be listed under horror even though (or because) it’s really a thriller.

Violence: Rated R, it can be startlingly grisly.

Overall: I’d recommend “Black Death”, but you’ll probably either like it or hate it. I personally loved it.