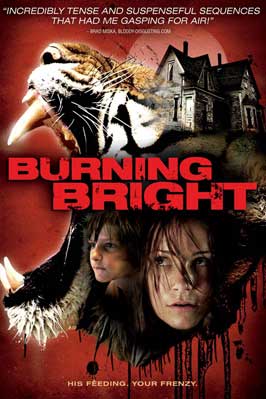 Plot: Kelly (Briana Evigan) is at a tough crossroads in her life. Her Mother apparently committed suicide and her little brother, Tom (Charlie Tahan), is autistic and difficult to control. She wants to go to College and leave Tom in a specialized institution, but her douche Stepfather Johnny (Garret Dillahunt) used all of her money to buy a tiger. Wait, what? Apparently Johnny wants to turn his house into a safari resort and the Tiger is intended to be the big draw. The house is boarded up because a hurricane is coming and when it hits, all hell breaks loose. Somehow, the tiger is in the house and Johnny is suspiciously absent. Now Kelly and Tom must survive, but this tiger is smart and it hasn’t been fed in two weeks. Do they even have a chance?

“Burning Bright” intrigued me for two reasons. The first is that I dug the premise. I mean, how many movies can boast being about a girl and her autistic brother trying to outwit a bloodthirsty tiger in their own home, while a hurricane rages outside? That sounds pretty awesome to me. The second reason is that the filmmakers had the common sense to avoid CGI. They use real Tigers, although they occasionally fall back on a green-screen. Nevertheless, had they gone for a CGI effect, you can guarantee that all of the suspense would’ve dissolved under the goofiness of bad CGI. So the filmmakers weren’t obviously in it for a quick buck. They wanted to make a solid thriller and they mostly succeed.

Ironically, despite being a stellar movie, I found myself frustrated that it didn’t go farther. But before I get into that, let’s discuss where the movie succeeded. For one, they got solid actors and while nobody deserves any awards here, the cast managed to engage me. Evigan is super hot, but she balances strength with vulnerability and her internal conflicts show up on-screen. Tahan does a good job at being an autistic kid but trust me, eventually you will wish that the tiger got him. Props to Dillahunt for giving his character a sense of humanity. The evil Stepfather role is by its nature, one dimensional. But Dillahunt portrays him as your average guy. Not necessarily likable, but he doesn’t strike you as evil either. I’m not going to spoil whether or not he turns out to be a villain of course. I only refer to Dillahunt’s acting. The characters are well established so that once hell breaks loose, it never gives us a break. 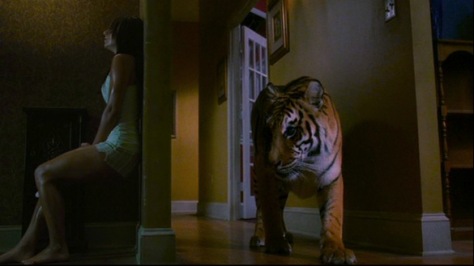 The bulk of the movie works as a cat-and-mouse type of thriller, or should I say tiger-and-mouse? Once the tiger is alerted to their presence, it persistently chases them and the girl has to outsmart the tiger while protecting the kid (who makes things worse). This keeps things moving reasonably well and every once in awhile, the film strikes gold. Some sequences are very intense. The laundry chute situation (which ripped off “Spider-Man”) had me squirming in my seat. Or what about that closet bit? I was chewing on my nails in anticipation.

So what went wrong? Quite frankly, it eventually becomes obvious that they don’t have enough material to fit the whole movie. The “twist” isn’t much of a twist and you pretty much feel like you know how it’s going to end almost immediately after it begins. Personally, an R-rating might’ve added an edge to the proceedings and I’m not just talking about gore either. It needed to be edgier and more frightening. I had to believe that maybe these kids wouldn’t make it. The PG-13 rating just suggests that the movie will be a bit soft, and it is. But more noticeably, it just starts to get redundant. How many times do I need to see the girl peering from behind a door, hall, or whatever? How many times do I need to see the kid screw things up? How many scenes do we need of the kids hiding and thinking that the tiger is going to leave, only for it to notice them? All of this just lessened the movie. I mean, this had three writers and they couldn’t think of anything else to freshen it up? At least the script is pretty focused. When you have three writers, it’s common for them to have different visions. So mismanaged time spent on useless subplots is prevalent. But “Burning Bright” never loses sight of who or what it wants to be about, which is pretty refreshing. 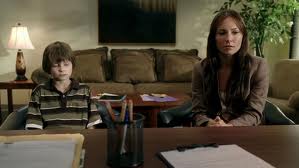 So “Burning Bright” only has one major flaw. It could’ve been better. Initially the suspenseful scenes were really effective. The tiger is pretty scary looking and its intelligence makes it even more menacing. The close call scenes had me on the edge of my seat. The actors are good and the characters are interesting. But there just reaches a point where it becomes apparent that the writers had run out of ideas long before the ending rolls around. What initially was very effective, starts to get old. You start to feel like the movie is just wasting time and that it will offer no more surprises. Perhaps it should’ve focused more on the tigers intelligence? I would’ve liked to see the girl and the beast be more creative with how they tried to outsmart each-other. I also would’ve liked a feeling of mortality amongst the characters. But still, it has its moments and there was never a point where I became bored. At most, it was pretty startling. At worst, it was mediocre. But at least “Burning Bright” tried to be something different, a trait rarely found in cinema these days. Really, I’m more annoyed at what it doesn’t do instead of what it does, which should mean something.

Violence: PG-13. I can’t even describe it without spoiling.

Nudity: None, but the lady is in her underwear and spends a lot of the movie in short shorts. She sure is sexy!

Overall: “Burning Bright” is worth a look if the premise intrigues you, although you should probably keep your expectations mild.