(Written by John Kim, Russell Mulcahy and four other dudes)

Plot: A Tsunami hits a coastal Australian city, trapping a group of survivors in a grocery store. As they work to escape their situation, they realize they are being hunted by two great white sharks…But more pressingly, will Josh (Xavier Samuel) and Tina (Sharni Vinson) get back together after their relationship fell apart when Tina’s brother died? And will the little dog live?

“Bait” is a killer shark movie…*sigh*…There was a time when just that statement alone would inspire me to go on an epic quest…to the video store…just to clutch the VHS to my chest and declare it was “My preciousssss“. The only reason I didn’t watch “Jaws” on a daily basis was because I had to spend some time with its sequels and if you’ve seen “Jaws: The Revenge“, you should know how that is true dedication. Admittedly, the majority of my killer shark exploits tended to end in disappointment because most were Direct-to-Video and had tiny budgets. But that didn’t stop my enthusiasm and I would squee whenever there would be another “Shark Attack” sequel- even though I didn’t like any of those. But unfortunately, DTV cinema and CGI would join forces in order to sour the experience for me. An army of killer shark movies invaded every video store and my initial blissfulness was gobbled up by crappy looking CGI sharks whom would only appear on-screen for about two minutes.  The ‘genre’, if I can call it that, was so over-saturated with this kind of shit that I suddenly had no desire to associate with it anymore- and the same thing happened with dinosaurs too. These days, the killer shark genre has practically become a parody thanks to the Asylum and their Sharknados. It would take something truly awesome to get me invested once more. I dunno, maybe if there was a movie where the sharks attacked after being caught up in a tsunami, which has just engulfed a coastal town. But that would be far too clever of an idea to exis-

I really wanted to like “Bait” for its concept alone, which is both absurd but seems like something that could really happen…and I kind of liked “Bait“. When it does something well, I couldn’t help but cheer victoriously. But it also makes a lot of frustrating mistakes, mistakes which probably will keep me from ever experiencing it again. I suppose I should begin by saying that “Bait” isn’t intended to be ‘so bad, it’s good’…usually…This isn’t your traditional direct-to-DVD schlock, where you will be lucky if you can laugh at it. This is a much more “mature” movie, although I couldn’t help but feel that the filmmakers- and there were plenty of writers- weren’t entirely on the same page in regards to the tone. Was “Bait” supposed to be a silly, entertaining, gory shark opus or a dramatic, suspenseful thriller that just happens to be based around sharks? Sometimes the apparent clash in tones really can be distracting. The gore, for example, is pretty disgusting- which I would usually love. The 3D seemed wonderfully gimmicky, although it also takes you out of the action if you watch it in 2D. There are some wacky characters who have “funny” (I use quotes to imply sarcasm) lines and the cast is comprised by hot youngsters. I was often reminded of “Shark Night” in regards to the silliness, which isn’t necessarily a bad thing, but it doesn’t fit in with the rest of the movie. “Bait” seemed like it really wanted to be taken seriously, as it does focus on character drama and slow burn suspense. I have to admit that the tension often made me chew my nails in anticipation, even if  this occasionally backfired when someone would die in such an over-the-top manner. The violence was cool, but did not belong in such a patiently paced suspense thriller. The best parts were when characters are nervously moving through the water. Somehow, “Bait” even has a message for the audience, which sometimes moved me. It’s just too bad a touching interaction tying with the theme would follow a scene where an annoying yuppie couple bicker because the female doesn’t want to get her expensive shoes wet. 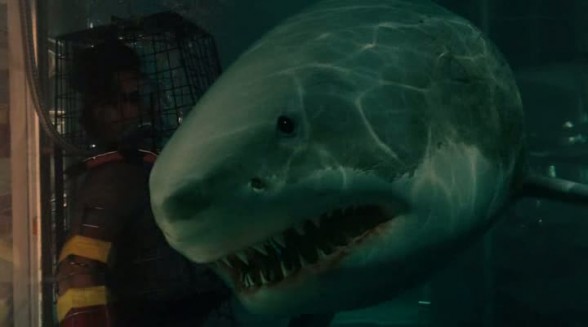 The special effects are uneven, but they are much better than what you’d expect. The Tsunami looked alright, although I think it covered the city too quickly. The very first effect was an unconvincing shark though, so the success of this natural disaster really caught me off guard. The sharks themselves vary in quality, as there is a mixture of animatronics and CGI effects. The animatronics were shockingly convincing (for the budget) and I hear they were the same ones featured in “Deep Blue Sea“. The CGI is…tolerable. Once you’ve been spoiled on the likes of the Asylum and other direct-to-DVD efforts, you get used to the really bad effects. “Bait” might not be as impressive as “Shark Night” in regards to the Computer Generated Imagery, but I have seen a lot worse. The problem is that the CGI and the robotic shark head don’t look anything alike, even though it’s supposed to be the same beast. I can forgive this though, as I felt the set redeemed the dodgy, inconsistent effects. I completely believed that the characters were trapped in a submerged grocery store and the filmmakers had fun with the location. The place is filled with floating corpses, underwater cars and various props that you would see in a store, which made the setting appear more authentic- while providing some very haunting shots.  In fact, the director does have some pretty cool visual ideas, even if his budget won’t allow him to fully realize them. The final scene, where we see the aftermath of the tsunami, was pretty powerful…although that CGI helicopter did sort of undermine its effect. But while “Bait” struggles with its budget limitations, the effort is definitely noticeable. The writers might struggle in various areas, but they did think of different ways to keep the action moving and the suspense high. If this was produced by anyone else, there would be a lot more padding, worse special effects, no suspense and probably not even any gore. “Bait” was made by people who wanted to deliver a good shark flick- whether they succeeded or not- and not by someone who just wanted to exploit the target audience.

Unfortunately, the character writing left much to be desired. It always baffles me when a project has so many writers and the end result is still a big bag of compiled cliches. Let me know if you’ve heard any of these before: Josh was engaged to Tina, but he pushed her away when her brother dies as he feels responsible. There is another subplot involving a cop whose daughter is a thief and rebel- even though I don’t know why she is angry with him. There’s an asshole manager who inevitably puts himself before the others. There is a yuppie couple who act like stereotypical high class teens and they have a little dog. You know the dog won’t be eaten, even when it appears that it has been eaten, because “Bait” is very safe. You know who live, die and when they will bite the big one…or should I say when the big one bites them. The only highlight is Doyle (Julian McMahon), who is awesome despite participating in a well worn robbery subplot. Ever hear of the story where a reformed crook returns to his life of crime in order to save his troubled brother? I also did like Tina’s boyfriend, whose expiration date is approaching simply because you know she and Josh will reunite in the end. But he was pretty endearing. Some characters are simply obnoxious and you can’t wait for them to die- except you’ll have to wait. The dialogue is pretty full of itself, but the actors do the best they can to sell it.

“Bait” does a lot right, as well as a lot wrong. I think I liked about half of the movie, while I despised the other half. However, for all of its failures, I never felt I was being conned. Many might reject the movie for taking itself too seriously, or might turn on it for not taking itself seriously enough- thanks to the inconsistent tone. I’m probably going to be a little generous though as I respect effort and while the filmmakers might’ve made some critical mistakes, I do think they tried their hardest. “Bait” gave me some awesome stuff to chew on: The creative premise, excellent set design, good animatronics, effective suspense and grotesque violence. But I had to spit out some unsavory seeds, such as crappy character writing, melodramatic drama, inconsistent CGI and a bi-polar tone. There’s a lot of good and bad, so you need to weigh both sides and determine whether or not “Bait” is for you based on your reaction to each point I made. Don’t just fall back on my final judgement.

Violence: Rated R. Can be pretty nasty in a goofy kind of way.

Nudity: None, although lots of people are in their swim suits and there is some sexuality.

Overall: I liked “Bait” enough because it boasted some creativity and effort, even if its mistakes keep this from being a glowing review.