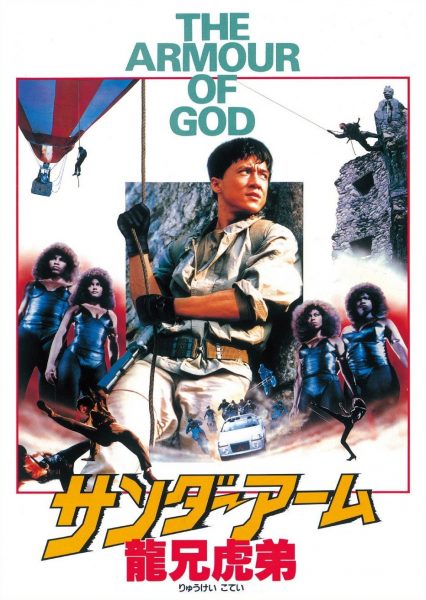 Plot: Asian Hawk (Jackie Chan) is a treasure hunter who is blackmailed into stealing the ‘Armour of God’ artifacts, when an evil Cult abducts his old flame (Rosamund Kwan). Also known as “Operation Condor 2: Armour of God” and “Lung hing foo dai“.

“Armour of God” might have the strangest distribution strategy of all time, or at least since Bruce Lee’s “The Big Boss” was dubbed “Fist of Fury” in the U.S, while the actual “Fist of Fury” was called “The Chinese Connection“…obviously because it was absolutely nothing like “The French Connection“.. During the mid 1990’s, Jackie Chan had suddenly become a marketable name in the United States, so his entire film catalogue invaded video stores much to my everlasting delight. I remember renting a film called “Operation Condor” and loving it, so was thrilled when I noticed “Operation Condor 2: Armour of God” waiting for me on a shelf in the NEW RELEASES section. What followed was my mind exploding for all of the wrong reasons, as I didn’t understand why the film quality looked older and cheaper…and even though I could not pinpoint this at the time, “Armour of God” had a very strong Hong Kong aftertaste with its style of comedy (so I didn’t understand the jokes), while “Operation Condor” seemed designed for westerners. Years later, I would learn that “Operation Condor” was actually the sequel to “Armour of God“, so the distributors switched the order because “Operation Condor” was released first in the west- presumably because it was more marketable. I suppose in retrospect, this wasn’t the most confusing encounter I had with one of Jackie Chan’s movies. I also remember renting “The Prisoner 2000” and literally within that same week, while browsing that same video store, I selected “Island of Fire“…which is the exact same movie, but under a different title…This was all before I took residence within the Internet, so I was very confused and felt like I had just been conned. Hell, even after I discovered the wonderful world of online pornography and made my beloved netflix account, I was tricked into adding a movie called “Second Strike” into my queue…which had Jackie Chan’s name and picture on the f@cking cover, but didn’t contain any Jackie f@cking Chan! THE RAGE STILL BURNS! But I digress- “Armour of God” is actually a very popular movie within Jackie’s filmography, so I wondered if my negative feelings were completely rooted in the circumstances from which I experienced it. So I watched the flick, and…

It’s pretty good! I don’t think “Armour of God” is among Jackie’s best films, but it is a solid representation of his works from the 1980’s. This was made during the period where Jackie Chan was distancing himself from traditional kung fu features and focusing more on amazing stuntwork- a decision which would raise him from a ‘star’ to a ‘living legend’. There is enough kung fu to satisfy purists and it is very smoothly choreographed, boasting the speed and style that one would expect from Jackie Chan, but “Armour of God” is more of a generalized action picture than it is martial arts. As stellar as the fight scenes are, you will be paying a lot more attention to the insane set pieces and crazy car chases. You’re seeing real explosions, real extras being put in real danger and the real Jackie Chan really free falling onto a real Hot Air Balloon…This shit is real…and it’s not shit…it’s awesome. Shockingly, “Armour of God” is also known as the movie that nearly killed Jackie Chan, when a tree branch broke from underneath his feet and caused him to fall 5 meters, cracking his skull on impact. This is also why there are noticeable continuity errors with his hair, as he grew it out while he was recovering. Either way, I thought “Armour of God” balanced its different kinds of action incredibly well, which kept the overall pacing more fluid, as it’s too diverse to become stale. You can counter that claim with: “But you just praised all of its action, so why would it grow stale even if it only focused on car chases, wild stunts or kung fu?“. “Armour of God” might have a lot of action, but it’s not non-stop, with much of the content surrounding the comedic character dynamics. If the quantity remained the same, but it was focused in one sub-genre of action, it wouldn’t have been enough to make up for…the flaws…ugh…So alternating between car stunts, acrobatics, hand-to-hand-combat, etc made it much easier to swallow. There is also some adventuring, espionage and shootouts, so there is enough styles of action for everyone. 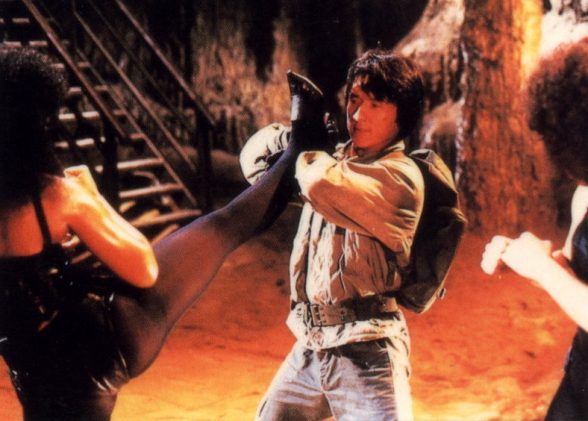 Unfortunately, whenever Jackie isn’t fighting someone or putting his life on the line, “Armour of God” tends to be kind of annoying. Apparently this was pitched as the Hong Kong equivalent of “Raiders of the Lost Ark“, but the filmmakers don’t follow through with this concept. There is a hint of an exotic flavor to “Armour of God“, but not as much as you would expect from any movie inspired by “Raiders of the Lost Ark“. The opening scene is certainly a shout-out to Indiana Jones, but the International atmosphere and the characterization of Asian Hawk are interchangeable with a lot of Jackie’s works during this time period. The plot kind of sucks, which is strange considering how many writers were attached. The villains diabolical plan makes absolutely no sense, as offering Jackie money seems like it would be a lot easier than kidnapping his ex and hoping that he bites the bait. We know that he’d probably turn them down, but they don’t and if he refused, they could resort to the abduction. Apparently they want to destroy the armour, as they think it will give them powers, but you never get any impression that this would work and that minimizes the stakes. I have to remind everyone that I am NOT a fan of Hong Kong comedy, especially during this time period, as I find it to be noisy and alienating. The banter amongst seemed too mean spirited to be amusing, although I’m sure Chinese Audiences would disagree with me (and that’s OK). I prefer Jackie Chan when he is the comical one, but during the 80’s he decided he wanted to be the straight man, with someone else functioning as the comedic relief. Alan Tam is the ‘funny guy’ and his posturing, clumsiness and uselessness was not endearing…at all…I didn’t think they had good chemistry, but at least their vitriolic relationship made sense. The bickering between Jackie Chan and May (Lola Forner) was far worse, as the filmmakers are aiming for that volatile kind of sexual tension, but their barbs are just too sharp to be cute. There isn’t even any closure for their ‘relationship’. As for Lorelei ( Rosamund Kwan), she has absolutely no characterization, so it’s hard to care for her plight. I really did not enjoy the character interactions or most of the goofiness…but I guess I did occasionally laugh, such as when Jackie and Alan instinctively respond to a ‘Hail, Satan’ greeting with a crucifix sign and an Amida Buddha chant. There is also A LOT of unintentional comedy, such as how the Amazonian Women have noticeably male stunt-doubles…Their climactic fight boasted exceptional choreography, but I found myself paying more attention to their sudden gender changing. I also love how Alan is singing a cheesy, upbeat pop song which is spliced over scenes of armed cultists massacring innocent people- which is shockingly graphic…Are we sure that Sammo Hung wasn’t the real director?

“Armour of God” made me laugh, just not when it wanted me to laugh. But at least I was laughing at something! I want to be clear that even though I disliked most of the actual comedy, I’m never going to criticize a Hong Kong movie for appealing towards its primary demographic. I just did not personally have a positive reaction to the jokes and some of them can only really be appreciated if you lived in Hong Kong during the 80’s. Chan, Tam and Kwan are all part of a band known as the Losers, but apparently the name is a parody of a real-life band called the Winners, whose members all appeared within the movie. I didn’t get it, but I’m sure Chinese Audiences wouldn’t understand American In-jokes either. Yet while I did not enjoy the character dynamics, the comedy or the plot, “Armour of God” still manages to amaze and entertain because of the spectacle. The fights, cars and stunts were awesome and that is why we watch these movies. Truthfully, I think the biggest obstacle “Armour of God” faces in the long run is that outside of nearly killing Jackie Chan, little about this movie stands out amongst the rest. Jackie Chan would acquire bigger budgets and expand upon the International appeal that would eventually lead to his conquering of Hollywood, while viewers are more likely to think of the eye popping stunts from “Police Story” and “Project A” before remembering “Armour of God” . I remember “Operation Condor” being a better film and “Chinese Zodiac“- the final sequel- resembled the Indiana Jones flicks more than this one did. But I guess that makes “Armour of God” somewhat of a darkhorse entry in Jackie’s filmography, the one that you tend to forget in favor of his better flicks, but also one you can fondly revisit once you get tired of watching his classics over and over again. There is nothing wrong with just being a good action flick and that is exactly what “Armour of God” is.

Violence: Rated R- There is one gratuitously grisly shootout scene.

Nudity: If you look closely, you can see breasts during the opening sequence and there is some sexuality sprinkled throughout the flick.

Overall: “Armour of God” is a solid Jackie Chan flick, neither being amongst his best or worst.