ANACONDAS: THE HUNT FOR THE BLOOD ORCHID (2004)

(Written by WAY too many people) 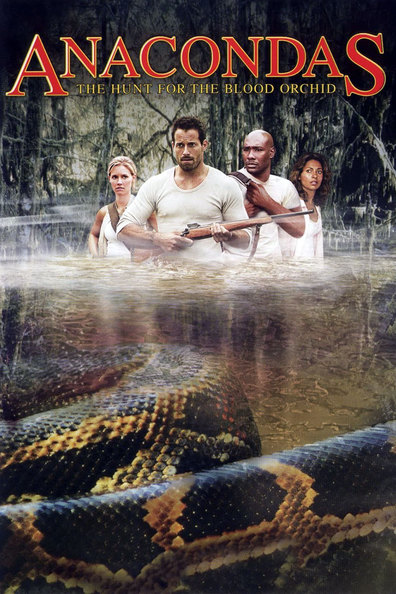 The problem with “Anacondas: The Hunt for the Blood Orchid” is…besides ‘swallowing and regurgitating’ when it sucks…and it sure loves sucking…is that it was produced long after the hype surrounding “Anaconda” had died down. Its predecessor may have been panned by critics, but it made as lot of money and resonated strongly with my age group- 11 year old kids. But they didn’t strike when the iron was hot and seven years later, we were 18 and our interests had changed. There are movies which have enduring reputations, so can wait many years until a a sequel is finally produced and fans will subsequently make their own mating ball in excitement, but “Anaconda” was a brief phase in our lives that we promptly forgot about. I have a feeling that the studio suspected this themselves, as “Anacondas” (the sequel; notice the “s”? Someone had delusions of “Aliens“) lacks the production values of its predecessor, even though financially successful flicks usually get more expensive sequels. Yet this was before the ScyFy channel had become a serial rapist of franchises, so at least this still had a budget. Amusingly- this actually becomes a problem for the film in the long run, as “Anacondas: The Hunt for the Blood Orchid” is too cheap to take seriously, yet not cheap enough to become a farce. It’s shockingly…dull…

One of the most interesting quirks about “Anaconda” was its wildly diverse cast, which included Jon Voight, Ice Cube, Jenifer Lopez, Owen Wilson and even Danny Trejo and their performances were equally wildly diverse- some hammed it up, some were wooden and others were taking the material far too seriously. Yet I enjoyed their interactions because they all had chemistry together, with their dialogue being colorful and amusing (not always intentionally so). “Anacondas” also boasts a relatively stellar cast of…people whose faces you might recognize, but whose names you’ve probably never known. These are all pretty good actors who turn in passable performances, but the writing of these characters is so f@cking horrible that you won’t notice. “Anacondas” is attempting to build a repertoire amongst its characters, but this amounts to them constantly snapping at each-other and it comes across as very mean spirited. I found EVERYBODY to be unpleasant in their own way, whether it’s inappropriately flirting with a co-workers, acting smug towards other peoples embarrassments’, being an obnoxious Ethnic stereotype, exerting their authority in aggressive and hostile ways and just being cruel to each-other for absolutely no reason. Why is Gail (Salli Richardson) so mean to everyone, all the time? The entirety of her dialogue is dedicated to bitching in some way, shape or form and the movie never even vilifies her for this! The only person whom I did not want to see become snake food is Tran (Karl Yune), because he had no real personality to hate!  After the opening credits attack sequence, we have to endure 40 MINUTES of these assholes and their horrible banter, before an anaconda comes and rescues us from them, but the kills are strangely unsatisfying (more on that later). Even more unforgivably, the most annoying characters don’t die and that makes me sad…

Isn’t it nice to know that it took at least four writers to come up with asinine, predictable and repetitive dialogue? There reached a point where I could guess what the character would say next, because he or she had already said it 10 times prior and these lines weren’t good to begin with. The plot was a little convoluted, but it still could’ve worked, if characters weren’t constantly doing stupid things in order to drive the the story forward. The characterizations- ignoring their irritating interactions- are shallow, their back-stories, motivations and relationship dynamics are vague, uninteresting and sometimes even unnecessary. It’s shocking how easily they feed into their various stereotypes, most of which that aren’t even around anymore, such as the black comedic relief (Eugene Byrd). I’ve always hated that cliche, along with the evil Brit trope, which was also still prevalent in 2004. Interestingly, despite having so many writers attributed to this script, no one realized that characters keep saying they’re going up-stream, when they later fall off a waterfall…Whoops? I’m not a geography expert myself, but even I know what ‘up-stream’ means. I hope waterfall related blunders become a running-gag of this franchise, as between this and the ‘reverse-footage waterfall’ from its predecessor, there is some comedic gold here. The script is pretty weak overall, but in a very cliched, mundane kind of way. I’m just stunned that it took four writers to do the same job that could’ve been done with one hack.

Dwight H. Little had quite a bit of experience as a director by the time he signed onto “Anacondas“, having helmed “Halloween 4” (one of the better sequels) and “Marked For Death” (one of the better Seagal flicks), among a few other recognizable titles. So why is the direction so amateurish and lazy here? There is one really exciting set piece, when the boat falls off the waterfall and there were even a few cool visuals- which I remember the trailer exploiting, as if they embodied the entirety of the film. But the remainder of the attacks were very awkwardly staged, feeling like the characters were struggling against…their imagination, I guess? The director and/or editor failed to make the attacks look anything more than just the actors pretending like something was grabbing them off-screen  It doesn’t help that the CGI is subpar at best, making me appreciate the questionable special effects in “Anaconda“. I don’t understand why Little chose to spend nearly every attack building up to the snake’s appearance, using POV’s and ripples in the water, only to have an anti-climactic revealing shot of the anaconda in all its bad CGI glory and return to the original off-screen tactics. We’ve already seen the menace, so there is no artistic reason to hide it anymore. Since you’re already ripping off “Jaws“, why don’t you just keep the snake off-screen until the finale? Then you’ll be be conserving your resources for a few important scenes, hopefully improving on the quality of the effects and it will feel more like a suspense tactic than mere corner cutting. The kills were very disappointing, usually being abrupt and lame, neither satisfying my cravings for violence or terror. In “Anaconda“, the constricting looked brutal and a lot of emphasis was put in the horrific manner of the deaths. Characters took a long time to die and you felt every second of their torment, with even the quicker deaths having an edge to them. One guy getting his neck snapped in “Anaconda” made me cringe even more than a guy being paralyzed, swallowed whole and apparently burned alive within the snake in “Anacondas“, simply because the direction was so flat. The snakes have grown teeth…apparently…so the deaths tend to surround brief maulings, but the camera never lingers for very long. The lighting grows increasingly murky during the first half, ensuring that I wasn’t able to tell what was going on the majority of the time, which is never a good thing. What the f@ck was up with that monkey? It was impossible to feel any suspense, because every time the snake would show up, the monkey would do something cute like cover its eyes. The adorableness of the monkey upstaged the intended terror of the situation. As cruel as this sounds, the pet monkey should’ve died when it was cornered by a snake early on, as it would’ve kept the suspense a little more intact and then I’d believe that anyone could die. Little doesn’t even do a good job at making the snakes look particularly bigger, even though characters keep pointing out their increased size. Horror films can survive bad scripts, but they can’t tolerate crappy direction and “Anacondas” is why.

Maybe there was executive meddling behind-the-scenes, or perhaps Little was merely out of his element…Although considering how badly he f@cked up the live-action “Tekken” movie, maybe he was always a hack and he simply got lucky when he occasionally made something worthwhile. But his direction was about as lackluster as everything else about this movie. Yet “Anacondas: The Hunt for the Blood Orchid” is still technically more competent than the majority of direct-to-video releases, even if it wasn’t worthy of the big screen. It’s just bad enough for you to dislike, but not bad enough for you to have any fun mocking it. I was bored, as the snakes only show up sporadically and when they do, they offer no catharsis or excitement. The characters were all unlikable and dull. Nothing about “Anacondas” makes it worth watching, even if it’s not among the worst sequels ever made. Despite being panned by everyone, “Anacondas: The Hunt for the Blood Orchid” did profit financially, catching the attention of the Syfy channel, who promptly impregnated it with its seed…leading to the birth of two more sequels and a cross-over with “Lake Placid“. From what I understand, they are significantly worse, but at least function as entertaining punching bags. I’m a little excited…

Violence: PG-13. The kills don’t have any bite to them, even though the snakes bite a lot of people.

Nudity: None, but there are a few talks of sex.

Overall: “Anacondas: The Hunt for the Blood Orchid” is a disappointing, boring sequel that won’t likely entertain anyone- even those who appreciated the cheesy, violent first movie.