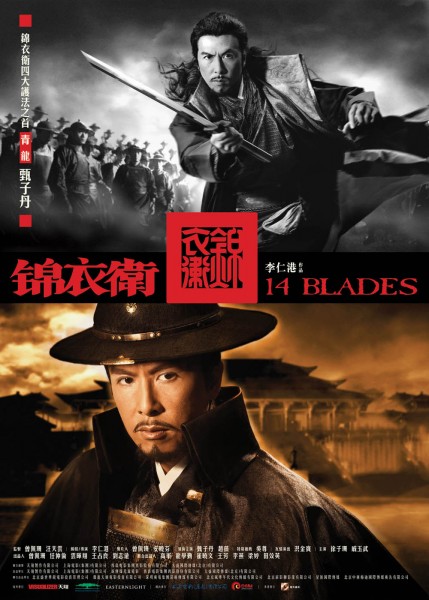 Plot: Qinlong (Donnie Yen) is an elite assassin who gets sent on a mission, only to find himself betrayed and hunted by his own kind. It turns out that he has stumbled upon a conspiracy, which he now has to sort out.

“14 Blades” is Daniel Lee’s latest attempt at creating a great kung fu-themed epic…and by latest, I mean three movies ago…and by ‘great’, I mean ‘falls short’. Lee is a compelling director because most of his works are above average, but you can tell that he’s really trying to make something special- but can’t seem to pull it off. “Three Kingdoms: Resurrection of the Dragon“, “Black Mask“, “Star Runner” and the subject of today- “14 Blades“- all have intricate (convoluted) story-lines with an epic (too many) cast of characters, whose relationships tend to be the core of the project (takes up too much screen-time). I have to give credit to Lee for being ambitious, but the end result is that his films tend to collapse under their own weight…and yet all of them seemingly have enough sparks to keep them from being dismissed as complete failures. “14 Blades” boasts an awesome Donnie Yen, a lively visual style and entertaining action sequences, but it’s really awkwardly paced thanks to the bloated narrative. Too much wasted screen-time is dedicated to stuff that doesn’t really matter.

The film takes an unnatural amount of time setting up our protagonist and how he is part of this incredibly dangerous group of assassins who work for the emperor. Much detail goes into their lifestyle, the titular 14 blades and how everyone is deathly afraid of these warriors…and all of this build up is completely pointless. I can’t remember any of them committing suicide, despite that being such a prominent theme, or even contemplating it. The box which contains the blades is awesome, but why elaborately explain what each of the blades represent if they’re all interchangeable? Outside of Donnie Yen’s character, the other members of his group tend to die just as easily as any mook, so either “14 Blades” wasted an opportunity, or it could’ve omitted much of that and saved us some time. The bulk of the story is dedicated to the romance between Qinlong (Donnie Yen) and Qiao Hua (Wei Zhao), but this is another case of ‘appears superficial, but we’re supposed to accept it as something deeper’. To be fair, the actors do have chemistry and as underdeveloped as the girl/romance is, Wei Zhao is too charming to hate. She made those scenes tolerable, but they don’t really amount to much in the end. Qinlong has a contest with the Judge of the Desert (Chun Wu), whose character arc makes no sense. His development just him changing his ways with little-to-no foreshadowing. Why did the movie need this subplot when the bandits could’ve easily been replaced with the Escort group for their more relevant sequences? I don’t know, maybe because Chun Wu is handsome and brooding (?). There are so many different storythreads that I began to have difficulty keeping up, so even some motivations were unclear to me. The funny thing is that individually, these subplots could’ve worked for separate films had any of them been fleshed out. But the episodic nature just tended to make “14 Blades” move at a sluggish pace. I was sure the climax was happening, until I realized that there was like 40 minutes to go. The final battle between Donnie Yen and Kate Tsui was nowhere near as intense as the battle I had with sleep.

Luckily, “14 Blades” does have its attributes of awesomeness, chief among them being Donnie Yen. He has gotten used to playing benevolent characters these days, probably thanks to the success of “Yip Man“. But here…he’s kind of an asshole. Just when you think he’s turning into a nice guy, he will partake in some douchebaggery and the process continues- but you do see him develop throughout the course of the film. Yen is so freaking cool, even moreso than usual in “14 Blades“. Whether he’s kicking the shit out of some bandits while casually eating chicken or chewing on a blade of grass or wielding that death box or wearing that attire…everything he did make me squee. The cast is good in general, even if you want more out of the characters (Sammo Hung cameos, but I would’ve preferred a larger role). The dialogue, while having some shining moments, tended to be a bit blunt with its message. As good as Wei Zhao is, you will be rolling your eyes at her “Why must people hurt each-other” speech she forces on Donnie Yen pretty early on. That was way too corny, but I did like the banter between Qinlong and Tuo Tuo (Kate Tsui)…even if it was wasted as her character is also underdeveloped. The lines about being friends with Qinlong were interesting, but barely came into play before or after that. Once again, “14 Blades” has all the right parts, but they’re not utilized to their fullest.

I thought the films stylistic choices were odd, but in a pretty fun kind of way. The costumes, locations and props tend to blend Western, Eastern and Middle Eastern Sensibilities- which provided a nice flavor. I like how the color scheme alternated between grim to vivid, being tasty eye candy regardless of which style the artistic brush was dipped in. While Lee’s previous epic, “Three Kingdoms” was more entertaining thanks to a fast pace, “14 Blades” is superior on a technical level. I’m not sure if it benefited from a more relaxed schedule or if Lee simply had more visual ideas, but there are a lot of impressive money shots. Every set seems to show off at least one. Not every effect has its intended desire, such as Tuo Tuo’s weird ‘after image’ technique, but the CGI was mostly limited to a few scenes. The action is…good, not great. While the choreography is solid, the emphasis is more on post production trickery. The editing, gimmicks, CGI and wire works drive the fights, but I had no issue with their execution. I never became frustrated due to shaky camerawork or overly tight editing. Some combat sequences were even thrilling. I prefer old school choreography myself, but I was fine with what “14 Blades” offered. As for the quantity, there are quite a few battles, but the pacing of the overall movie was so clumsy that they weren’t always able to reignite my interest. Once again, I feel much of the plot could’ve either been expanded or removed and everything would then be able to flow more smoothly. Daniel Lee needs to learn how to focus on the important stuff, or at least find someone to help control his ‘over-indulgence’. I hope he can overcome his storytelling weaknesses, as he obviously has an eye for visuals and is at least competent when it comes to the action. But as it is, “14 Blades“, continues his trend at ‘almost good’ movies- at least as of 2010. I hear “White Vengeance (2011)” is also merely ‘okay’, but he then went on hiatus for four years. Sometime in 2015, “Dragon Blade” is supposed to get a release and that sounds pretty awesome, but I suspect it will be another example of ‘almost’.

Violence: Rated R. Nothing too extreme.

Nudity: None. Although there is some sexiness to it. Donnie Yen looks ripped.

Overall: “14 Blades” is okay for fans of Donnie Yen, Daniel Lee or kung fu epics. Not exactly ‘must see’ entertainment, but entertaining enough to warrant a viewing if you’re part of the target audience.